The Old World monkeys or Cercopithecidae are a group of primates, falling in the superfamily Cercopithecoidea in the clade Catarrhini. The Old World monkeys are native to Africa and Asia today, inhabiting a range of environments from tropical rain forest to savanna, shrubland and mountainous terrain, and are also known from Europe in the fossil record. However, a (possibly introduced) free-roaming group of monkeys still survives in Gibraltar (Europe) to this day. Old World monkeys include many of the most familiar species of non-human primates such as baboons and macaques. 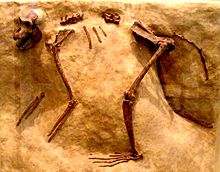 Old World monkeys are medium to large in size, and range from arboreal forms, such as the colobus monkeys, to fully terrestrial forms, such as the baboons. The smallest is the talapoin, with a head and body 34-37 cm in length, and weighing between 0.7 and 1.3 kilograms, while the largest is the male mandrill (the females of the species being significantly smaller), at around 70 cm in length, and weighing up to 50 kilograms.[2]

From the point of view of superficial appearance, Old World monkeys are unlike apes in that most have tails (the family name means "tailed ape"), and unlike the New World monkeys in that their tails are never prehensile. Technically, the distinction of catarrhines from platyrrhines depends on the structure of the nose, and the distinction of Old World monkeys from apes depends on dentition (the number of teeth is the same in both, but they are shaped differently). In platyrrhines the nostrils face sideways, whilst in catarrhines, they face downwards. Other distinctions include both a tubular ectotympanic (ear bone), and eight, not twelve, premolars in catarrhines, giving them a dental formula of:

Several Old World monkeys have anatomical oddities. The colobus monkeys have a stub for a thumb to assist with their arboreal movement; the proboscis monkey has an extraordinary nose while the snub-nosed monkeys have almost no nose at all; the penis of the male Mandrill is colored red and the scrotum has a lilac color, while the face also has bright coloration like the genitalia and this develops in only the dominant male of a multi-male group. 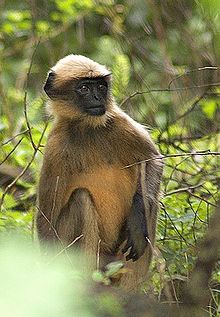 Most Old World monkeys are at least partially omnivorous, but all prefer plant matter, which forms the bulk of their diet. Leaf monkeys are the most vegetarian, subsisting primarily on leaves, and eating only a small number of insects, while the other species are highly opportunistic, primarily eating fruit, but also consuming almost any food items available, such as flowers, leaves, bulbs and rhizomes, insects, snails, and even small vertebrates.[2]

Gestation in the Old World monkeys lasts between five and seven months. Births are usually single, although, as with humans, twin births do also occur from time to time. The young are born relatively well developed, and are able to cling onto their mother's fur with their hands from birth. Compared with most other mammals, they take a long time to reach sexual maturity, with four to six years being typical of most species.

In most species, daughters remain with their mothers for life, so that the basic social group among Old World monkeys is a matrilineal troop. Males leave the group on reaching adolescence, and find a new troop to join. In many species, only a single adult male lives with each group, driving off all rivals, but others are more tolerant, establishing hierarchical relationships between dominant and subordinate males. Group sizes are highly variable, even within species, depending on the availability of food and other resources.[2]

Two subfamilies are recognized, the Cercopithecinae, which are mainly African but include the diverse genus of macaques which are Asian and North African, and the Colobinae, which includes most of the Asian genera but also the African colobus monkeys.