The aye-aye (Daubentonia madagascariensis) is a lemur, a strepsirrhine primate native to Madagascar that combines rodent-like teeth and a special thin middle finger to fill the same ecological niche as a woodpecker. It is the world's largest nocturnal primate, and is characterized by its unusual method of finding food; it taps on trees to find grubs, then gnaws holes in the wood and inserts its narrow middle finger to pull the grubs out. The only other animal species known to find food in this way is the striped possum.[4] From an ecological point of view the aye-aye fills the niche of a woodpecker, as it is capable of penetrating wood to extract the invertebrates within.[5][6]

The aye-aye is the only extant member of the genus Daubentonia and family Daubentoniidae (although it is currently classified as Near Threatened by the IUCN); a second species, Daubentonia robusta, appears to have become extinct at some point within the last 1000 years.[7]

Its binomial name honours the French naturalist Louis-Jean-Marie Daubenton and the island on which it is found, Madagascar. Among some Malagasy, the aye-aye is imitatively called "hay-hay"[8] for a vocalization it is claimed to make. It is supposedly from the European acceptance of this name that its common name was derived.[9] However, the aye-aye makes no such vocalization. The name was also hypothesized to be of European origin, with a European observer overhearing an exclamation of fear and surprise ("aiee!-aiee!") by Malagasy who encountered it. However, the name exists in remote villages, so it is unlikely to be of European origins. Another hypothesis is that it derives from "heh heh," which is Malagasy for, "I don't know." If correct, then the name might have originated from Malagasy people saying "heh heh" to Europeans to avoid saying the name of a feared, magical animal.[10]

Due to its derived morphological features, the classification of the aye-aye has been debated since its discovery. The possession of continually growing incisors (front teeth) parallels those of rodents, leading early naturalists to mistakenly classify the aye-aye within mammalian order Rodentia.[11]

The aye-aye's classification with the order Primates has been just as uncertain. It has been considered a highly derived member of the Indridae family, a basal branch of the strepsirrhine suborder, and of indeterminate relation to all living primates.[12] In 1931, Anthony and Coupin classified the aye-aye under infraorder Chiromyiformes, a sister group to the other strepsirrhines. Colin Groves upheld this classification in 2005 because he was not entirely convinced the aye-aye formed a clade with the rest of the Malagasy lemurs,[1] despite molecular tests that had shown Daubentoniidae was basal to all Lemuriformes,[12] deriving from the same lemur ancestor that rafted to Madagascar during the Paleocene or Eocene. In 2008, Russell Mittermeier, Colin Groves, and others ignored addressing higher-level taxonomy by defining lemurs as monophyletic and containing five living families, including Daubentoniidae.[2]

Further evidence indicating that the aye-aye belongs in the superfamily Lemuroidea can be inferred from the presence of a petrosal bullae encasing the ossicles of the ear. However, interestingly, the bones themselves may have some resemblance to those of rodents [11].

The aye-aye lives primarily on the east coast of Madagascar. Its natural habitat is rainforest or deciduous forest, but many live in cultivated areas due to deforesting. Rainforest aye-ayes, the most common, dwell in canopy areas, and are usually sighted upwards of 700 meters altitude. They sleep during the day in nests built in the forks of trees.[citation needed]

The aye-aye is classically considered 'solitary' as they have not been observed to groom each other.[citation needed] However, recent research suggests it is more social than once thought. It usually sticks to foraging in its own personal home range, or territory. The home ranges of males often overlap, and the males can be very social with each other. Female home ranges never overlap, though a male's home range often overlaps that of several females. The male aye-ayes live in large areas up to 80 acres (320,000 m2), while females have smaller living spaces that goes up to 20 acres (81,000 m2). Regular scent marking with their cheeks and neck is how aye-ayes let others know of their presence and repel intruders from their territory.[13] Like many other prosimians, the female aye-aye is dominant to the male. They are not monogamous by any means, and often compete with each other for mates. Males are very aggressive in this regard, and sometimes even pull other males off a female during mating. Outside of mating, males and females interact only occasionally, usually while foraging.[citation needed]

The father will sometimes share food with the infant, but otherwise infants' primary source of social interaction is with their mothers. Mothers and infants often wrestle, chase, and play "peek-a-boo" for entertainment. After 13 weeks, infants are usually ready to interact with other young aye-ayes, usually by play-fighting.[citation needed] 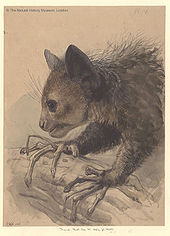 The aye-aye begins foraging anywhere between 30 minutes before and three hours after sunset. Up to 80% of the night is spent foraging in the canopy, separated by occasional rest periods. The monkey-like body of the aye-aye enables it to move vertically with ease. It climbs trees by making successive vertical leaps, much like a squirrel. Horizontal movement is more difficult, but the aye-aye rarely descends to jump to another tree, and can often cross up to 4 km (2.5 mi) a night.[citation needed]

Infants are fully dextrous within a month of birth. At first, they can only climb on a branch hanging upside down, but they gradually work their way up to the various acrobatic feats adults can perform. Curiously, walking and running on the ground are often hardest for an aye-aye to master.[citation needed]

Though foraging is mostly solitary, they will occasionally forage in groups. Individual movements within the group are coordinated using both sound (vocalisations) and scent signals.[citation needed]

The aye-aye commonly eats animal matter, nuts, insect larvae, fruits, nectar, seeds, and fungi, classifying it as an omnivore. Aye-ayes are particularly fond of cerambycid beetles. It picks fruit off trees as it moves through the canopy, often barely stopping to do so. An aye-aye not in its natural habitat will often steal coconuts, mangoes, sugar cane, lychees and eggs from villages and plantations. Aye-ayes tap on the trunks and branches of the trees they visit up to eight times per second, and listen to the echo produced to find hollow chambers inside. Once a chamber is found, they chew a hole into the wood and get grubs out of that hole with their narrow and bony middle fingers.[citation needed]

The original meaning of the name aye-aye has been lost, as the originating language is extinct. The word "aye aye" is hypothesized to signify simply a cry of alarm to alert others to the presence of this animal, which many Malagasy consider an ill omen.[citation needed]

The aye-aye was thought to be extinct in 1933, but was rediscovered in 1957. Nine individuals were transported to Nosy Mangabe, an island near Maroantsetra off eastern Madagascar, in 1966.[14] Recent research shows the aye-aye is more widespread than was previously thought, but is still categorized as Near Threatened.[3]

Several aye-ayes are kept in zoos; the largest collection and most successful breeding program, with a current population of 20 individuals, is at the Duke Lemur Center at Duke University, Durham, North Carolina, US. Several also reside outside of the US at various locations.[15]

Illustration of an aye-aye (Daubentonia robusta)

The aye-aye is a near threatened species not only because its habitat is being destroyed, but also due to native superstition. Besides being a general nuisance in villages, ancient Malagasy legend said the Aye-aye was a symbol of death.

Researchers in Madagascar report remarkable fearlessness in the aye-aye; some accounts tell of individual animals strolling nonchalantly in village streets or even walking right up to naturalists in the rainforest and sniffing their shoes. [16]

However, public contempt goes beyond this. The aye-aye is often viewed as a harbinger of evil and killed on sight. Others believe, should one point its narrow middle finger at someone, they are condemned to death. Some say the appearance of an aye-aye in a village predicts the death of a villager, and the only way to prevent this is to kill it. The Sakalava people go so far as to claim aye-ayes sneak into houses through the thatched roofs and murder the sleeping occupants by using their middle finger to puncture the victim's aorta.[5]

Incidents of aye-aye killings increase every year as its forest habitats are destroyed and it is forced to raid plantations and villages. Because of the superstition surrounding it, this often ends in death.