Rhizome
This article is about the botanical term. For other uses, see Rhizome (disambiguation). 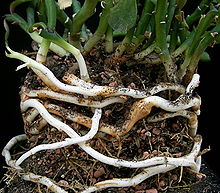 A Euphorbia plant sending out rhizomes

In botany and dendrology, a rhizome (from Ancient Greek: rhízōma "mass of roots",[1] from rhizóō "cause to strike root")[2] is a characteristically horizontal stem of a plant that is usually found underground, often sending out roots and shoots from its nodes. Rhizomes may also be referred to as creeping rootstalks or rootstocks.

If a rhizome is separated into pieces, each piece may be able to give rise to a new plant. This is a process known as vegetative reproduction and is used by farmers and gardeners to propagate certain plants. Examples of plants that are propagated this way include hops, asparagus, ginger, irises, Lily of the Valley, Cannas, and sympodial orchids. Some examples of rhizomes that are used directly in cooking are ginger, turmeric, galangal, and fingerroot.

The Quaking Aspen (Populus tremuloides) is an example of a tree that propagates using a rhizome. Aspen clonal colonies in the American West, such as the large Pando colony in Utah, may have been living for over 1 million years. The rhizome of an aspen colony is the key to its longevity. Foragers, insects, fungus, and forest fires may destroy the above-ground portion of the tree, but the underground rhizome is somewhat protected against these threats.

A stolon is similar to a rhizome, but, unlike a rhizome, which is the main stem of the plant, a stolon sprouts from an existing stem, has long internodes, and generates new shoots at the end, such as in the strawberry plant. In general, rhizomes have short internodes; they send out roots from the bottom of the nodes and new upward-growing shoots from the top of the nodes. It is a method of reproduction for plants. A stem tuber is a thickened part of a rhizome or stolon that has been enlarged for use as a storage organ.[3] In general, a tuber is high in starch, for example, the common potato, which is a modified stolon. The term tuber is often used imprecisely, and is sometimes applied to plants with rhizomes.

Some plants have rhizomes that grow above ground or that lie at the soil surface, including some Iris species, and ferns, whose spreading stems are rhizomes. Plants with underground rhizomes include gingers, bamboo, the Venus Flytrap, Chinese lantern, Western poison-oak,[4] hops, and Alstroemeria, and the weeds Johnson grass, bermuda grass, and purple nut sedge. Rhizomes generally form a single layer, but in Giant Horsetails, can be multi-tiered.[5]