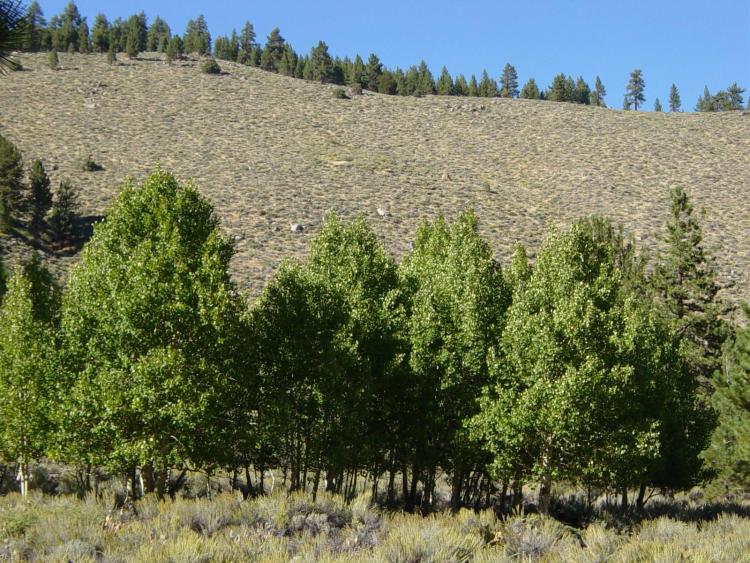 The Quaking Aspen of North America is known for its leaves turning spectacular tints of red and yellow in the autumn of the year (and usually in the early autumn at the altitudes where it lives). This causes forests of aspen trees to be noted tourist attractions for viewing them in the fall. These aspens are found as far south as the San Bernardino Mountains of Southern California, though they are most famous for growing in Colorado.

Aspens, apart from the aberrant White Poplar, are distinguished by their nearly round leaves on mature trees, 9–16 centimeters in diameter with irregular rounded teeth. They are carried on strongly flattened leaf stems, that cause the leaves to twist and flutter in slight breezes. The juvenile leaves on young seedlings and root sprouts differ markedly from the adult leaves, being nearly triangular, showing here the typical leaf shape of most other s; they are also often much larger, 13–26 cm long. The five typical aspens are distinguished from each other by leaf size and the size and spacing of the teeth on the adult leaves. White Poplar leaves differ in being deeply five-lobed, covered in thick white down, and having only a slightly flattened leaf stem.

The five typical aspens are all native to cold regions with cool summers, in the north of the Northern Hemisphere, extending south at high altitudes in the mountains. The White Poplar, by contrast, is native to warmer regions, with hot, dry summers. These trees are all medium-sized trees ranging 15–30 meters tall.

All of the aspens (including the White Poplar) typically grow in large clonal colonies derived from a single seedling, and spreading by means of root suckers; new stems in the colony may appear at up to 30–40 meters from the parent tree. Each individual tree can live for 40–150 years above ground, but the root system of the colony is long-lived. In some cases, this is for thousands of years, sending up new trunks as the older trunks die off above ground. For this reason it is considered to be an indicator of ancient woodlands. One such colony in Utah, given the nickname of "Pando", is claimed to be 80,000 years old, making it possibly the oldest living colony of aspens. Some aspen colonies become very large with time, spreading about a meter per year, eventually covering many hectares. They are able to survive forest fires, since the roots are below the heat of the fire, with new sprouts growing after the fire burns out.

However, aspens do not thrive very well in the shade, and it is difficult for aspen seedlings to grow in an already mature aspen stand. Fire indirectly benefits aspen trees, since it allows the saplings to flourish in open sunlight in the burned landscape. Lately, aspens have an increased popularity in forestry, mostly because of their fast growth rate and ability to regenerate from sprouts, making the regeneration of the forest after harvesting much cheaper, since no planting or sowing is required.

In contrast with many trees, aspen bark is base-rich, meaning that aspens are important hosts for bryophytes [ [http://www.cairngorms.co.uk/resource/docs/publications/05042007/CNPA.Paper.440.Aspen%20Report.txt The Biodiversity and Management of Aspen woodlands: Proceedings of a one-day conference held in Kingussie, Scotland, on 25th May 2001] ] and act as food plants for the s of species—see .

The unusual ability of the leaves of "Populus" to twist and bend due to the flattened petioles may not be fully understood. It is thought to help protect the trees from severe winds, perhaps by helping dissipate energy more uniformly throughout the canopy. [ [http://www.fnr.purdue.edu/inwood/past%20issues/windaffe.htm William R. Chaney, Purdue University: How Wind Affects Trees] ] It is also thought to improve the rate of photosynthesis throughout the tree by reducing the exposure of the outer leaves to extreme sunlight (thus reducing ) by presenting the leaves at an oblique angle to the sun throughout the day, while at the same time allowing more light through to the lower leaves which are generally overshaded. This would enable leaves throughout the tree to photosynthesize more efficiently. [ [http://academics.hamilton.edu/biology/ewilliam/umarshfieldtrips.html Ernest Williams: Field Trip Guide for Utica Marsh: "Quaking Aspen"] ]

Basque shepherds in 19th and 20th-century America were said to carve texts and figures on aspens of the American Southwest to express their loneliness.

Aspen is white and soft, but fairly strong, and has low flammability. It has a number of uses, notably for making es, where its low flammability makes it safer to use than most other woods. Shredded aspen wood is used for packing and stuffing, sometimes called . It is also a popular animal bedding, since it lacks the s associated with and , which are thought to cause respiratory ailments in some animals. Heat-treated aspen is a popular material for the interiors of a .

All of the Populus contain some salicin and populin, relatives and precursors of aspirin. Leaves and leaf buds were used to treat burns, irritations, aches, and swollen joints. Bitter tea from bark and leaves treated mild urinary tract inflammations. The Ojibwe used the inner bark of the trunk as a poultice; the Cree ate the inner bark in the spring, as a mild purgative. [http://www.botany.ubc.ca/facilities/arboretum/UBC114.HTM]