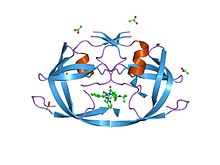 Diagrammatical representation of the molecular structure of protein registered with 1k6c code.

Simian immunodeficiency virus (SIV), also known as African Green Monkey virus and also as Monkey AIDS is a retrovirus able to infect at least 33 species of African primates.[1][2] Based on analysis of strains found in four species of monkeys from Bioko Island, which was isolated from the mainland by rising sea levels about 11,000 years ago, it has been concluded that SIV has been present in monkeys and apes for at least 32,000 years, and probably much longer.[3][4]

Virus strains from two of these primate species, SIVsmm in sooty mangabeys and SIVcpz in chimpanzees, are believed to have crossed the species barrier into humans, resulting in HIV-2 and HIV-1, respectively. The most likely route of transmission of HIV-1 to humans involves contact with the blood of chimps that are often hunted for bushmeat in Africa.[3]

Unlike HIV-1 and HIV-2 infections in humans, SIV infections in their natural hosts appear in many cases to be non-pathogenic. Extensive studies in sooty mangabeys have established that SIVsmm infection does not cause any disease in these animals, despite high levels of circulating virus. However, if this virus infects an Asian rhesus macaque, the animal will develop simian AIDS (SAIDS).[citation needed] A recent study of SIVcpz in wild living chimpanzees suggests that infected chimpanzees experience an AIDS-like illness similar to HIV-1 infected humans. The later stages of SIV infection turn into SAIDS, much as human HIV infection turns into AIDS.

Immunodeficiency resembling human AIDS was reported in captive monkeys in the United States beginning in 1983.[5][6][7] SIV was isolated in 1985 from some of these animals, captive rhesus macaques suffering from simian AIDS (SAIDS).[6] The discovery of SIV was made shortly after HIV-1 had been isolated as the cause of AIDS and led to the discovery of HIV-2 strains in West Africa. HIV-2 was more similar to the then-known SIV strains than to HIV-1, suggesting for the first time the simian origin of HIV. Further studies indicated that HIV-2 is derived from the SIVsmm strain found in sooty mangabeys, whereas HIV-1, the predominant virus found in humans, is derived from SIV strains infecting chimpanzees (SIVcpz).

Differences in species specificity of SIV and related retroviruses may be partly explained by variants of the protein TRIM5α in humans and non-human primate species. This intracellular protein recognizes the capsid of various retroviruses and blocks their reproduction. Other proteins such as APOBEC3G/3F may also be important in restricting cross-species transmission.

SHIV, a virus combining parts of the HIV and SIV genomes, was created for research purposes.

Beatrice Hahn of the University of Alabama at Birmingham recently led a team of researchers to find that chimpanzees do die from simian AIDS in the wild and that the AIDS outbreak in Africa has contributed to the decline of chimpanzee populations. Testing wild chimpanzees, researchers detected organ and tissue damage similar to late-stage human AIDS. The infected chimpanzees had a 10 to 16 times greater risk of dying than uninfected ones; infected females were less likely to give birth, could pass the virus to their infants, and had a higher infant mortality rate than uninfected females.[8][9]

In 2010, researchers reported that SIV had infected monkeys in Bioko for at least 32,000 years. Previously it was thought that SIV infection in monkeys had happened over the past few hundred years.[11] Scientists estimated that it would take a similar amount of time before humans adapted naturally to HIV infection in the way monkeys in Africa have adapted to SIV and not suffer any harm from the infection.[12]