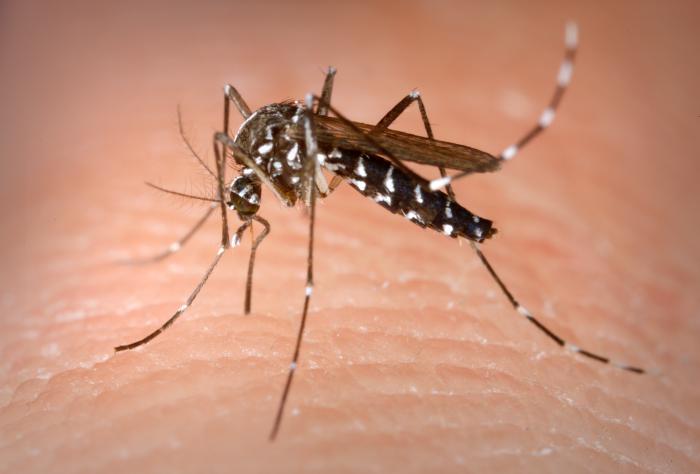 The Asian tiger mosquito or forest day mosquito ("Aedes albopictus"), from the family , is characterized by its and d s, and small black and white . It is native to , but nowadays is present on all s excluding Antarctica and occurs as far north as 49° in .

Other mosquitoes in , such as "", have a similar leg pattern. The typical "Aedes albopictus" individual has a length of about 2 to 10mm. [Walker, K. (2007): "Asian Tiger Mosquito (Aedes albopictus) Pest and Diseases Image Library." Updated on 22/12/2007 10:10:35 PM. Online: [http://www.padil.gov.au/viewPestDiagnosticImages.aspx?id=83 Pest and Diseases Image Library] ] As with other members of the mosquito family, the female is equipped with an elongated that she uses to collect to feed her eggs. The Asian tiger mosquito has a rapid bite that allows it to escape most attempts by people to swat it.By contrast the male member of the species primarily feeds on .

The female lays her eggs near water; not directly into it as other mosquitoes do, but typically near a stagnant pool. However, any open container containing water will suffice for larvae development, even with less than an ounce of water in. It can also breed in running water, so stagnant pools of water are not its only breeding sites. It has a short flight range (less than 200 m), so breeding sites are likely to be close to where this mosquito is found [Nishida & Tenorio (1993)] .

This species is able to survive in a wide range of habitats and conditions, including cold mountainous areas. It is generally more aggressive than indigenous mosquitoes, and is outcompeting them.

Asian tiger mosquitoes were first found in North America in a shipment of used s at the port of in . Since then they have spread across southern , and as far up the East Coast as Maine. [: [http://ohioline.osu.edu/hyg-fact/2000/2148.html Asian Tiger Mosquito] . Retrieved 2007-SEP-10.] This species is an in as well, but has been there since before 1896.

They have been found in since , and in since Verify source|date=April 2008Fact|date=April 2008 . By mid-, the was present in , [: [http://www.maf.govt.nz/mafnet/press/060307mozzie.htm Mosquito identification confirmed as Asian Tiger Mosquito] . Version of 2007-MAR-06. Retrieved 2007-SEP-10.] Fact|date=April 2008 , and 12 an countries including and where it may already be an established resident. [: [http://news.bbc.co.uk/1/hi/health/6981476.stm Mosquito virus arrives in Europe] . Version of 2007-SEP-06. Retrieved 2007-SEP-06.] In the species was first found in 2003, in southern canton; in November 2007 a record from confirmed that it had crossed the . [: [http://www.welt.de/welt_print/article1407300/Asiatische_Tigermcke_erstmals_nrdlich_der_Alpen_gefunden.html Asiatische Tigermücke erstmals nördlich der Alpen gefunden] Version of 2007-NOV-28. Retrieved 2008-APR-02.] In September 2007, the first Asian tiger mosquito eggs were found in Germany, near . It was also recently confirmed to have established itself in Australia and IsraelFact|date=April 2008. It is one of the 100 world's worst according to the Global Invasive Species Database. [" [http://www.issg.org/database/species/search.asp?st=100ss&fr=1&str=&lang=EN 100 of the World's Worst Invasive Alien Species] ". Global Invasive Species Database. Retrieved 2008-08-21.]

This mosquito has become a significant pest in many communities because it closely associates with humans (rather than living in wetlands), and typically flies and feeds in the daytime in addition to at dusk and dawn.

Efforts to curb the spread of mosquito-borne illnesses have led many government agencies to initiate programs to spray for mosquito control. However, the Asian Tiger is not a known carrier of in the United States. This mosquito is active in the daytime, not just after dawn and just before dusk as most indigenous mosquito species, and so is a likely culprit if people or pets are being bitten in the daytime. Most mosquito spraying done at night will have little effect on Asian tiger mosquitoes. (Daytime spraying may be a violation of label directions if foraging s are present on blossoms in the application area.)

It is however, possible to find and deal with the breeding spots, which are never far from where people are being bitten, since this is a weak flyer, with only about a 200-yard lifetime flying radius. Locate puddles that last more than three days, sagging or plugged roof gutters, old tires holding water, litter, bird baths, kiddie pools, inlets to sewers and drainage systems holding stagnant water and any other possible containers or pools of standing water. Flowing water will not be a breeding spot and water that contains s is not usually a problem, because the eat the mosquito .
Dragonflies are also an excellent method of imposing control. Dragonfly larvae eat mosquito larvae in the water, and adults will snatch adult mosquitoes as they fly. application that also kills dragonflies may actually cause only a brief suppression of mosquitoes, followed by a long term increase in populations.

Whenever possible, all sources of standing water, even if only a quarter cup, should be dumped every three days. , especially containers in ditches, can hold water after the ditch dries up, and all litter should be cleaned up. Bird baths, wading pools, and any other containers that can hold rainwater should be emptied.

Any standing water in pools, catchment basins, etc, that cannot be drained, or dumped, can be periodically treated with properly labeled insecticides or "" often formed into doughnut shaped "mosquito dunks." The BTI organism only affects pest insects. While floating or tied to a small weight, they slowly release a long term biological mosquito larvicide killing the larvae young mosquitos before they hatch into adults reportedly without affecting fish, plants, people or wildlife. It is readily available at farm, garden, and pool suppliers.