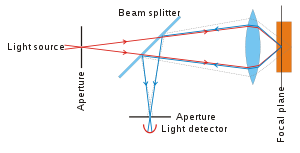 Confocal microscopy is an optical imaging technique used to increase optical resolution and contrast of a micrograph by using point illumination and a spatial pinhole to eliminate out-of-focus light in specimens that are thicker than the focal plane.[1] It enables the reconstruction of three-dimensional structures from the obtained images. This technique has gained popularity in the scientific and industrial communities and typical applications are in life sciences, semiconductor inspection and materials science.

The principle of confocal imaging was patented in 1957 by Marvin Minsky[2] and aims to overcome some limitations of traditional wide-field fluorescence microscopes. In a conventional (i.e., wide-field) fluorescence microscope, the entire specimen is flooded evenly in light from a light source. All parts of the specimen in the optical path are excited at the same time and the resulting fluorescence is detected by the microscope's photodetector or camera including a large unfocused background part. In contrast, a confocal microscope uses point illumination (see Point Spread Function) and a pinhole in an optically conjugate plane in front of the detector to eliminate out-of-focus signal - the name "confocal" stems from this configuration. As only light produced by fluorescence very close to the focal plane can be detected, the image's optical resolution, particularly in the sample depth direction, is much better than that of wide-field microscopes. However, as much of the light from sample fluorescence is blocked at the pinhole, this increased resolution is at the cost of decreased signal intensity – so long exposures are often required.

As only one point in the sample is illuminated at a time, 2D or 3D imaging requires scanning over a regular raster (i.e. a rectangular pattern of parallel scanning lines) in the specimen. The achievable thickness of the focal plane is defined mostly by the wavelength of the used light divided by the numerical aperture of the objective lens, but also by the optical properties of the specimen. The thin optical sectioning possible makes these types of microscopes particularly good at 3D imaging and surface profiling of samples.

Each of these classes of confocal microscope have particular advantages and disadvantages, most systems are either optimised for resolution or high recording speed (i.e. video capture) or high spatial resolution. Confocal laser scanning microscopes can have a programmable sampling density and very high resolutions while Nipkow and PAM use a fixed sampling density defined by the camera resolution. Imaging frame rates are typically very slow for laser scanning systems (e.g. less than 3 frames/second). Commercial spinning-disk confocal microscopes achieve frame rates of over 50 per second[3] – a desirable feature for dynamic observations such as live cell imaging. In practice Nipkow and PAM allow multiple pinholes scanning the same are in parallel [4] as long as the pinholes are sufficiently far apart. Cutting edge development of confocal laser scanning microscopy now allows better than video rate (60 frames/second) imaging by using multiple microelectromechanical systems based scanning mirrors.

Confocal x-ray fluorescence imaging is a newer technique that allows control over depth, in addition to horizontal and vertical aiming, for example, when analyzing buried layers in a painting.[5]

The point spread function of the pinhole is an ellipsoid, several times as long as it is wide. This limits the axial resolution of the microscope. One technique of overcoming this is 4π microscopy where incident and or emitted light are allowed to interfere from both above and below the sample to reduce the volume of the ellipsoid. An alternative technique is confocal theta microscopy. In this technique the cone of illuminating light and detected light are at an angle to each other (best results when they are perpendicular). The intersection of the two PSFs gives a much smaller effective sample volume. From this evolved the single plane illumination microscope.

There are confocal variants that achieve resolution below the diffraction limit like STED microscopy.