Dark field microscopy (dark ground microscopy) describes microscopy methods, in both light and electron microscopy, which exclude the unscattered beam from the image. As a result, the field around the specimen (i.e. where there is no specimen to scatter the beam) is generally dark.

In optical microscopy, darkfield describes an illumination technique used to enhance the contrast in unstained samples. It works by illuminating the sample with light that will not be collected by the objective lens, and thus will not form part of the image. This produces the classic appearance of a dark, almost black, background with bright objects on it.

The steps are illustrated in the figure where an upright microscope is used.

Diagram illustrating the light path through a dark field microscope. 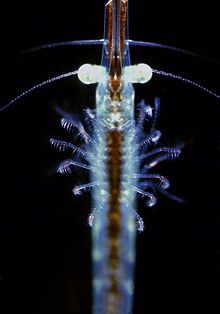 Dark field microscopy produces an image with a dark background.

Dark field microscopy is a very simple yet effective technique and well suited for uses involving live and unstained biological samples, such as a smear from a tissue culture or individual water-borne single-celled organisms. Considering the simplicity of the setup, the quality of images obtained from this technique is impressive.

Dark field microscopy has recently been used in computer mice, in order to allow optical mice to work on transparent glass by imaging microscopic flaws and dust on its surface.

Darkfield studies in transmission electron microscopy play a powerful role in the study of crystals and crystal defects, as well as in the imaging of individual atoms.

Briefly, imaging [1] involves tilting the incident illumination until a diffracted, rather than the incident, beam passes through a small objective aperture in the objective lens back focal plane. Darkfield images, under these conditions, allow one to map the diffracted intensity coming from a single collection of diffracting planes as a function of projected position on the specimen, and as a function of specimen tilt.

In single crystal specimens, single-reflection darkfield images of a specimen tilted just off the Bragg condition allow one to "light up" only those lattice defects, like dislocations or precipitates, which bend a single set of lattice planes in their neighborhood. Analysis of intensities in such images may then be used to estimate the amount of that bending. In polycrystalline specimens, on the other hand, darkfield images serve to light up only that subset of crystals which is Bragg reflecting at a given orientation.

Weak beam imaging involves optics similar to conventional darkfield, but use of a diffracted beam harmonic rather than the diffracted beam itself. Much higher resolution of strained regions around defects can be obtained in this way.

Annular darkfield imaging requires one to form images with electrons diffracted into an annular aperture centered on, but not including, the unscattered beam. For large scattering angles in a scanning transmission electron microscope, this is sometimes called Z-contrast imaging because of the enhanced scattering from high atomic number atoms.