In spectroscopy, the absorbance A (also called optical density)[2][3] is defined as:[4]

where I is the intensity of light at a specified wavelength λ that has passed through a sample (transmitted light intensity) and I0 is the intensity of the light before it enters the sample or incident light intensity (or power). Absorbance measurements are often carried out in analytical chemistry, since the absorbance of a sample is proportional to the thickness of the sample and the concentration of the absorbing species in the sample, in contrast to the transmittance I / I0 of a sample, which varies exponentially with thickness and concentration. 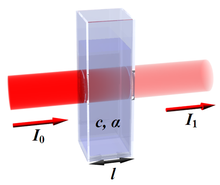 Absorptance is explained, as it relates to absorbance, on the Color and Vision Research Laboratories, Institute of Ophthalmology, UCL, in this way:

Absorbance spectra are typically used to define photopigment spectra because their shape, when normalized (i.e., plotted as a fraction of the maximum absorbance), is independent of pigment optical density (pigment concentration). In contrast, the absorptance spectra, like the spectral sensitivity of the human subject, broadens as the optical density increases.[6]

Outside the field of analytical chemistry, e.g. when used with the Tunable Diode Laser Absorption Spectroscopy (TDLAS) technique, the absorbance is often defined using the natural logarithm instead of the common logarithm, i.e. as

See the Beer-Lambert law for a more complete discussion.

The term absorption refers to the physical process of absorbing light, while absorbance refers to the mathematical quantity. Also, absorbance does not always measure absorption: if a given sample is, for example, a dispersion, part of the incident light will in fact be scattered by the dispersed particles, and not really absorbed. However, in such cases, it is recommended that the term "attenuance" (formerly called "extinction") be used, which accounts for losses due to scattering and luminescence.[7]

Although absorbance does not have true units, it is quite often reported in "Absorbance Units" or AU (not to be confused with the Astronomical unit).

Any real measuring instrument has a limited range over which it can accurately measure absorbance. An instrument must be calibrated and checked against known standards if the readings are to be trusted. Many instruments will become non-linear (fail to follow the Beer-Lambert law) starting at approximately 2 AU (~1% Transmission). It is also difficult to accurately measure very small absorbance values (below 10−4) with commercially available instruments for chemical analysis. In such cases, laser-based absorption techniques can be used, since they have demonstrated detection limits that supersede those obtained by conventional non-laser-based instruments by many orders of magnitude (detections have been demonstrated all the way down to 5 10−13). The theoretical best accuracy for most commercially available non-laser-based instruments is in the range near 1 AU. The path length or concentration should then, when possible, be adjusted to achieve readings near this range.

Some filters, notably welding glass, are rated by shade number, which is 7/3 times the absorbance plus one:[8]