Two-photon excitation microscopy is a fluorescence imaging technique that allows imaging of living tissue up to a very high depth, that is up to about one millimeter. Being a special variant of the multiphoton fluorescence microscope, it uses red-shifted excitation light which can also excite fluorescent dyes. However for each excitation, two photons of the infrared light are absorbed. Using infrared light minimizes scattering in the tissue. Due to the multiphoton absorption the background signal is strongly suppressed. Both effects lead to an increased penetration depth for these microscopes. However, the resolution remains diffraction-limited. Two-photon excitation can be a superior alternative to confocal microscopy due to its deeper tissue penetration, efficient light detection and reduced phototoxicity.[1]

Two-photon excitation employs a concept first described by Maria Goeppert-Mayer (1906–1972) in her doctoral dissertation in 1931,[2] and first observed in 1961 in a CaF2:Eu2+ crystal using laser excitation by Wolfgang Kaiser.[3] Isaac Abella showed in 1962 in cesium vapor that two-photon excitation of single atoms is possible.[4]

The concept of two-photon excitation is based on the idea that two photons of comparably lower energy than needed for one photon excitation can also excite a fluorophore in one quantum event. Each photon carries approximately half the energy necessary to excite the molecule. An excitation results in the subsequent emission of a fluorescence photon, typically at a higher energy than either of the two excitatory photons. The probability of the near-simultaneous absorption of two photons is extremely low. Therefore a high flux of excitation photons is typically required, usually a femtosecond laser.

The most commonly used fluorophores have excitation spectra in the 400–500 nm range, whereas the laser used to excite the two-photon fluorescence lies in the ~700–1000 nm (infrared) range. If the fluorophore absorbs two infrared photons simultaneously, it will absorb enough energy to be raised into the excited state. The fluorophore will then emit a single photon with a wavelength that depends on the type of fluorophore used (typically in the visible spectrum). Because two photons are absorbed during the excitation of the fluorophore, the probability for fluorescent emission from the fluorophores increases quadratically with the excitation intensity. Therefore, much more two-photon fluorescence is generated where the laser beam is tightly focused than where it is more diffuse. Effectively, excitation is restricted to the tiny focal volume (~1 femtoliter), resulting in a high degree of rejection of out-of-focus objects. This localization of excitation is the key advantage compared to single-photon excitation microscopes, which need to employ additional elements such as pinholes to reject out-of-focus fluorescence. The fluorescence from the sample is then collected by a high-sensitivity detector, such as a photomultiplier tube. This observed light intensity becomes one pixel in the eventual image; the focal point is scanned throughout a desired region of the sample to form all the pixels of the image. 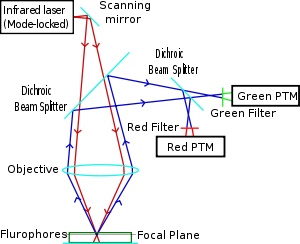 A diagram of a two-photon microscope

Two-photon microscopy was pioneered by Winfried Denk in the lab of Watt W. Webb at Cornell University. He combined the idea of two-photon absorption with the use of a laser scanner.[5] In two-photon excitation microscopy an infrared laser beam is focused through an objective lens. The Ti-sapphire laser normally used has a pulse width of approximately 100 femtoseconds and a repetition rate of about 80 MHz, allowing the high photon density and flux required for two photons absorption and is tunable across a wide range of wavelengths. Two-photon technology has been patented by Winfried Denk, James Strickler and Watt Webb at Cornell University.[6]

The use of infrared light to excite fluorophores in light-scattering tissue has added benefits.[7] Longer wavelengths are scattered to a lesser degree than shorter ones, which is a benefit to high-resolution imaging. In addition, these lower-energy photons are less likely to cause damage outside the focal volume. Compared to a confocal microscope, photon detection is much more effective since even scattered photons contribute to the usable signal. These benefits for imaging in scattering tissues were only recognized several years after the invention of two-photon excitation microscopy.[8] There are several caveats to using two-photon microscopy: The pulsed lasers needed for two-photon excitation are much more expensive than the continuous wave (CW) lasers used in confocal microscopy. The two-photon absorption spectrum of a molecule may vary significantly from its one-photon counterpart. For very thin objects such as isolated cells, single-photon (confocal) microscopes can produce images with higher optical resolution due to their shorter excitation wavelengths. In scattering tissue, on the other hand, the superior optical sectioning and light detection capabilities of the two-photon microscope result in better performance.