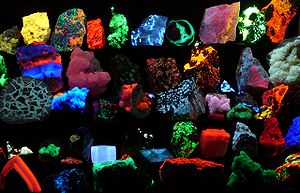 The most striking examples of fluorescence occur when the absorbed radiation is in the ultraviolet region of the spectrum, and thus invisible to the human eye, and the emitted light is in the visible region.

An early observation of fluorescence was described by Nicolás Monardes in 1565 in the infusion of a certain type of wood (Lignum nephriticum).[2] The chemical compound responsible for this fluorescence is matlanine, which is the oxidation product of one of the flavonoids found in this wood.[3] In 1819 Edward D. Clarke and in 1822 René Just Haüy described fluorescence in florites, Sir David Brewster described the phenomenon for chlorophyll in 1833 and Sir John Herschel did the same for quinine in 1845.

In his 1852 paper on the "Refrangibility" (wavelength change) of light, George Gabriel Stokes, described a property of fluorspar and uranium glass, materials which he viewed as having the power to convert invisible ultra-violet radiation into radiation of longer wavelengths that are visible, he named the phenomenon fluorescence.[4] He chose the name "to denote the general appearance of a solution of sulphate of quinine and similar media".[5] The name was derived from the mineral fluorite (calcium difluoride), some examples of which contain traces of divalent europium, which serves as the fluorescent activator to emit blue light. In a key experiment he used a prism to isolate ultraviolet radiation from sunlight and observed blue light emitted by a ethanol solution of quinine exposed by it.

Fluorescence occurs when an orbital electron of a molecule, atom or nanostructure relaxes to its ground state by emitting a photon of light after being excited to a higher quantum state by some type of energy:

here hν is a generic term for photon energy with h = Planck's constant and ν = frequency of light. (The specific frequencies of exciting and emitted light are dependent on the particular system.)

State S0 is called the ground state of the fluorophore (fluorescent molecule) and S1 is its first (electronically) excited state.

A molecule in its excited state, S1, can relax by various competing pathways. It can undergo 'non-radiative relaxation' in which the excitation energy is dissipated as heat (vibrations) to the solvent. Excited organic molecules can also relax via conversion to a triplet state, which may subsequently relax via phosphorescence or by a secondary non-radiative relaxation step.

Relaxation of an S1 state can also occur through interaction with a second molecule through fluorescence quenching. Molecular oxygen (O2) is an extremely efficient quencher of fluorescence just because of its unusual triplet ground state.

Molecules that are excited through light absorption or via a different process (e.g. as the product of a reaction) can transfer energy to a second 'sensitized' molecule, which is converted to its excited state and can then fluoresce. This process is used in lightsticks to produce different colors.

where kf is the rate of spontaneous emission of radiation and

is the sum of all rates of excited state decay. Other rates of excited state decay are caused by mechanisms other than photon emission and are, therefore, often called "non-radiative rates", which can include: dynamic collisional quenching, near-field dipole-dipole interaction (or resonance energy transfer), internal conversion, and intersystem crossing. Thus, if the rate of any pathway changes, both the excited state lifetime and the fluorescence quantum yield will be affected.

Fluorescence quantum yields are measured by comparison to a standard. The quinine salt quinine sulfate in a sulfuric acid solution is a common fluorescence standard.

The fluorescence lifetime refers to the average time the molecule stays in its excited state before emitting a photon. Fluorescence typically follows first-order kinetics:

is the concentration of excited state molecules at time t,

is the initial concentration and Γ is the decay rate or the inverse of the fluorescence lifetime. This is an instance of exponential decay. Various radiative and non-radiative processes can de-populate the excited state. In such case the total decay rate is the sum over all rates:

where Γtot is the total decay rate, Γrad the radiative decay rate and Γnrad the non-radiative decay rate. It is similar to a first-order chemical reaction in which the first-order rate constant is the sum of all of the rates (a parallel kinetic model). If the rate of spontaneous emission, or any of the other rates are fast, the lifetime is short. For commonly used fluorescent compounds, typical excited state decay times for photon emissions with energies from the UV to near infrared are within the range of 0.5 to 20 nanoseconds. The fluorescence lifetime is an important parameter for practical applications of fluorescence such as fluorescence resonance energy transfer.

There are several rules that deal with fluorescence. The Kasha–Vavilov rule dictates that the quantum yield of luminescence is independent of the wavelength of exciting radiation. This is not always true and is violated severely in many simple molecules. A somewhat more reliable statement, although still with exceptions, would be that the fluorescence spectrum shows very little dependence on the wavelength of exciting radiation.

The Jablonski diagram describes most of the relaxation mechanisms for excited state molecules.

There are many natural and synthetic compounds that exhibit fluorescence, and they have a number of applications. Some deep-sea animals, such as the greeneye, use fluorescence.

For more details on this topic, see Fluorescent lamp. 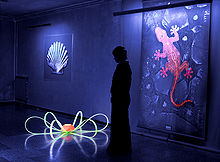 Fluorescent paint and plastic lit by UV tubes. Paintings by Beo Beyond

The common fluorescent lamp relies on fluorescence. Inside the glass tube is a partial vacuum and a small amount of mercury. An electric discharge in the tube causes the mercury atoms to emit ultraviolet light. The tube is lined with a coating of a fluorescent material, called the phosphor, which absorbs the ultraviolet and re-emits visible light. Fluorescent lighting is more energy-efficient than incandescent lighting elements. However, the uneven spectrum of traditional fluorescent lamps may cause certain colors to appear different than when illuminated by incandescent light or daylight. The mercury vapor emission spectrum is dominated by a short-wave UV line at 254 nm (which provides most of the energy to the phosphors), accompanied by visible light emission at 436 nm (blue), 546 nm (green) and 579 nm (yellow-orange). These three lines can be observed superimposed on the white continuum using a hand spectroscope, for light emitted by the usual white fluorescent tubes. These same visible lines, accompanied by the emission lines of trivalent europium and trivalent terbium, and further accompanied by the emission continuum of divalent europium in the blue region, comprise the more discontinuous light emission of the modern trichromatic phosphor systems used in many compact fluorescent lamp and traditional lamps where better color rendition is a goal.[6]

Fluorescent lights were first available to the public at the 1939 New York World's Fair. Improvements since then have largely been better phosphors, longer life, and more consistent internal discharge, and easier-to-use shapes (such as compact fluorescent lamps). Some high-intensity discharge (HID) lamps couple their even-greater electrical efficiency with phosphor enhancement for better color rendition.[citation needed]

White light-emitting diodes (LEDs) became available in the mid-1990s as LED lamps, in which blue light emitted from the semiconductor strikes phosphors deposited on the tiny chip. The combination of the blue light that continues through the phosphor and the green to red fluorescence from the phosphors produces a net emission of white light.[citation needed]

Glow sticks sometimes utilize fluorescent materials to absorb light from the chemiluminescent reaction and emit light of a different color.[6]

Many analytical procedures involve the use of a fluorometer, usually with a single exciting wavelength and single detection wavelength. Because of the sensitivity that the method affords, fluorescent molecule concentrations as low as 1 part per trillion can be measured.[citation needed]

Fluorescence in several wavelengths can be detected by an array detector, to detect compounds from HPLC flow. Also, TLC plates can be visualized if the compounds or a coloring reagent is fluorescent. Fluorescence is most effective when there is a larger ratio of atoms at lower energy levels in a Boltzmann distribution. There is, then, a higher probability of excitement and release of photons by lower-energy atoms, making analysis more efficient.

Usually the setup of a Fluorescence assay involves a Light source, which may emit an array different wavelengths of light. In general, a single wavelength is required for proper analysis, so, in order to selectively filter the light, it is passed through an excitation monochromator, and then that chosen wavelength is passed through the sample cell. After absorption and re-emission of the energy, many wavelengths may emerge due to Stokes shift and various electron transitions. To separate and analyze them, the fluorescent radiation is passed through an Emission monochromator, and observed selectively by a detector.[7] 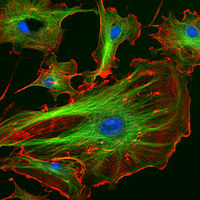 Fluorescence in the life sciences is used generally as a non-destructive way of tracking or analysis of biological molecules by means of the fluorescent emission at a specific frequency where there is no background from the excitation light, as relatively few cellular components are naturally fluorescent (called intrinsic or autofluorescence). In fact, a protein or other component can be "labelled" with a extrinsic fluorophore, a fluorescent dye that can be a small molecule, protein, or quantum dot, finding a large use in many biological applications.[8]

The quantification of a dye is done with a spectrofluorometer and finds additional applications in:

. Ethidium bromide fluoresces orange when intercalating DNA and when exposed to UV light.

Fingerprints can be visualized with fluorescent compounds such as ninhydrin. Blood and other substances are sometimes detected by fluorescent reagents, in particular where their location was not previously known.

Gemstones, minerals, fibers, and many other materials that may be encountered in forensics or with a relationship to various collectibles may have a distinctive fluorescence or may fluoresce differently under short-wave ultraviolet, long-wave ultraviolet, or X-rays.

Fluorescence in minerals is caused by a wide range of activators. In some cases, the concentration of the activator must be restricted to below a certain level, to prevent quenching of the fluorescent emission. Furthermore, certain impurities such as iron or copper need to be absent, to prevent quenching of possible fluorescence. Divalent manganese, in concentrations of up to several percent, is responsible for the red or orange fluorescence of calcite, the green fluorescence of willemite, the yellow fluorescence of esperite, and the orange fluorescence of wollastonite and clinohedrite. Hexavalent uranium, in the form of the uranyl cation, fluoresces at all concentrations in a yellow green, and is the cause of fluorescence of minerals such as autunite or andersonite, and, at low concentration, is the cause of the fluorescence of such materials as some samples of hyalite opal. Trivalent chromium at low concentration is the source of the red fluorescence of ruby. Divalent europium is the source of the blue fluorescence, when seen in the mineral fluorite. Trivalent lanthanides such as terbium and dysprosium are the principal activators of the creamy yellow fluorescence exhibited by the yttrofluorite variety of the mineral fluorite, and contribute to the orange fluorescence of zircon. Powellite (calcium molybdate) and scheelite (calcium tungstate) fluoresce intrinsically in yellow and blue, respectively. When present together in solid solution, energy is transferred from the higher-energy tungsten to the lower-energy molybdenum, such that fairly low levels of molybdenum are sufficient to cause a yellow emission for scheelite, instead of blue. Low-iron sphalerite (zinc sulfide), fluoresces and phosphoresces in a range of colors, influenced by the presence of various trace impurities.

Crude oil (petroleum) fluoresces in a range of colors, from dull-brown for heavy oils and tars through to bright-yellowish and bluish-white for very light oils and condensates. This phenomenon is used in oil exploration drilling to identify very small amounts of oil in drill cuttings and core samples.

Organic liquids such anthracene in benzene, toluene, or stilbene in the same solvents fluoresce with ultraviolet or gamma ray irradiation. The decay times of this fluorescence are of the order of nanoseconds, since the duration of the light depends on the lifetime of the excited states of the fluorescent material, in this case anthracene or stilbene.[citation needed]