Forensic science (often shortened to forensics) is the application of a broad spectrum of sciences to answer questions of interest to a legal system. This may be in relation to a crime or a civil action. The word forensic comes from the Latin forēnsis, meaning "of or before the forum."[1] In Roman times, a criminal charge meant presenting the case before a group of public individuals in the forum. Both the person accused of the crime and the accuser would give speeches based on their sides of the story. The individual with the best argument and delivery would determine the outcome of the case. This origin is the source of the two modern usages of the word forensic – as a form of legal evidence and as a category of public presentation.

Antiquity and the Middle Age

The ancient world lacked standardized forensic practices, which aided criminals in escaping punishment. Criminal investigations and trials relied on forced confessions and witness testimony. However ancient sources contain several accounts of techniques that foreshadow the concepts of forensic science that is developed centuries later, such as the "Eureka" legend told of Archimedes (287–212 BC).[2] The account about Archimedes tells of how he invented a method for determining the volume of an object with an irregular shape. According to Vitruvius, a votive crown for a temple had been made for King Hiero II, who had supplied the pure gold to be used, and Archimedes was asked to determine whether some silver had been substituted by the dishonest goldsmith.[3] Archimedes had to solve the problem without damaging the crown, so he could not melt it down into a regularly shaped body in order to calculate its density.

While taking a bath, he noticed that the level of the water in the tub rose as he got in, and realized that this effect could be used to determine the volume of the crown. For practical purposes water is incompressible,[4] so the submerged crown would displace an amount of water equal to its own volume. By dividing the mass of the crown by the volume of water displaced, the density of the crown could be obtained. This density would be lower than that of gold if cheaper and less dense metals had been added. Archimedes then took to the streets naked, so excited by his discovery that he had forgotten to dress, crying "Eureka!" (Greek: "εὕρηκα!," meaning "I have found it!"). The test was conducted successfully, proving that silver had indeed been mixed in.[5]

The first written account of using medicine and entomology to solve (separate) criminal cases is attributed to the book of Xi Yuan Lu (translated as "Washing Away of Wrongs"[6][7]), written in Song Dynasty China by Song Ci (宋慈, 1186–1249) in 1248. In one of the accounts, the case of a person murdered with a sickle was solved by a death investigator who instructed everyone to bring his sickle to one location. (He realized it was a sickle by testing various blades on an animal carcass and comparing the wound.) Flies, attracted by the smell of blood, eventually gathered on a single sickle. In light of this, the murderer confessed. The book also offered advice on how to distinguish between a drowning (water in the lungs) and strangulation (broken neck cartilage), along with other evidence from examining corpses on determining if a death was caused by murder, suicide or an accident.

In the 16th-century Europe medical practitioners in army and university settings began to gather information on cause and manner of death. Ambroise Paré, a French army surgeon, systematically studied the effects of violent death on internal organs. Two Italian surgeons, Fortunato Fidelis and Paolo Zacchia, laid the foundation of modern pathology by studying changes that occurred in the structure of the body as the result of disease. In the late 18th century, writings on these topics began to appear. These included A Treatise on Forensic Medicine and Public Health by the French physician Fodéré and The Complete System of Police Medicine by the German medical expert Johann Peter Franck.

In 1773 a Swedish chemist Carl Wilhelm Scheele devised a way of detecting arsenous oxide, simple arsenic, in corpses, although only in large quantities. This investigation was expanded, in 1806, by German chemist Valentin Ross, who learned to detect the poison in the walls of a victim's stomach, and by English chemist James Marsh, who used chemical processes to confirm arsenic as the cause of death in an 1836 murder trial.

Two early examples of English forensic science in individual legal proceedings demonstrate the increasing use of logic and procedure in criminal investigations. In 1784, in Lancaster, John Toms was tried and convicted for murdering Edward Culshaw with a pistol. When the dead body of Culshaw was examined, a pistol wad (crushed paper used to secure powder and balls in the muzzle) found in his head wound matched perfectly with a torn newspaper found in Toms' pocket. In Warwick in 1816, a farm labourer was tried and convicted of the murder of a young maidservant. She had been drowned in a shallow pool and bore the marks of violent assault. The police found footprints and an impression from corduroy cloth with a sewn patch in the damp earth near the pool. There were also scattered grains of wheat and chaff. The breeches of a farm labourer who had been threshing wheat nearby were examined and corresponded exactly to the impression in the earth near the pool.[8] Police started using fingerprints for evidence when Juan Vucetich solved a murder case in Argentina by cutting off a piece of door with a bloody fingerprint on it.[9] Later in the 20th century several British pathologists, Bernard Spilsbury, Francis Camps, Sydney Smith and Keith Simpson pioneered new forensic science methods in Britain. In 1909 Rodolphe Archibald Reiss founded the first school of forensic science in the world: the "Institut de police scientifique" at the University of Lausanne (UNIL). 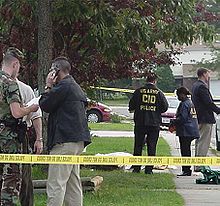 Some forensic techniques, believed to be scientifically sound at the time they were used, have turned out later to have much less scientific merit or none.[13] Some such techniques include:

Litigation science describes analysis or data developed or produced expressly for use in a trial versus those produced in the course of independent research. This distinction was made by the US 9th Circuit Court of Appeals when evaluating the admissibility of experts.[18]

This uses demonstrative evidence, which is evidence created in preparation of trial by attorneys or paralegals.

Sherlock Holmes, the fictional character created by Sir Arthur Conan Doyle in works produced from 1887 to 1915, used forensic science as one of his investigating methods. Conan Doyle credited the inspiration for Holmes on his teacher at the medical school of the University of Edinburgh, the gifted surgeon and forensic detective Joseph Bell. Agatha Christie's Hercule Poirot and Miss Marple books and television series were also a big hit worldwide.

Barry Allen (alter ego of The Flash) is a forensic scientist for the Central City police department.

One of the earliest television series to focus on the scientific analysis of evidence was Quincy, M.E. (1976-83, and based loosely on an even earlier Canadian series titled Wojeck), with the title character, a medical examiner working in Los Angeles solving crimes through careful study. The opening theme of each episode featured a clip of the title character, played by Jack Klugman, beginning a lecture to a group of police officers with "Gentlemen, you are about to enter the fascinating sphere of police work, the world of forensic medicine." Later series with similar premises include Dexter, The Mentalist, CSI, Cold Case, Bones, Law & Order, NCIS, Criminal Minds, Silent Witness, Case Closed, Monk, Midsomer Murders and Waking the Dead, depict glamorized versions of the activities of 21st-century forensic scientists. Some claim these TV shows have changed individuals' expectations of forensic science, an influence termed the "CSI effect".[19]

Questions about forensic science, fingerprint evidence and the assumption behind these disciplines have been brought to light in some publications,[20][21] the latest being an article in the New York Post.[22] The article stated that "No one has proved even the basic assumption: That everyone's fingerprint is unique."[22] The article also stated that "Now such assumptions are being questioned - and with it may come a radical change in how forensic science is used by police departments and prosecutors."[22]

On 25 June 2009 the Supreme Court issued a 5-to-4 decision in Melendez-Diaz v. Massachusetts stating that crime laboratory reports may not be used against criminal defendants at trial unless the analysts responsible for creating them give testimony and subject themselves to cross-examination. The Supreme Court cited the National Academies report Strengthening Forensic Science in the United States[23] in their decision. Writing for the majority, Justice Antonin Scalia referred to the National Research Council report in his assertion that "Forensic evidence is not uniquely immune from the risk of manipulation."