Monk is an American comedy-drama detective mystery television series created by Andy Breckman and starring Tony Shalhoub as the titular character, Adrian Monk. It originally ran from 2002 to 2009 and is primarily a mystery series, although it has dark and comic touches.

The series debuted on July 12, 2002, on USA Network. It was well received and continued for eight seasons, with the final season concluding on December 4, 2009. The series currently holds the record for the most watched scripted drama episode in cable television history, a record previously held by The Closer. Monk set the record with "Mr. Monk and the End – Part II", its series finale, with 9.4 million viewers; 3.2 million of them in the 18–49 demographic.[1]

Adrian Monk was a brilliant detective for the San Francisco Police Department until his wife, Trudy, was killed by a car bomb in a parking garage, which Monk then believed was intended for him. He later believes that Trudy's death was part of a larger conspiracy that she had uncovered during her time as a journalist. Trudy's death led Monk to suffer a nervous breakdown. He was discharged from the force and became a recluse, refusing to leave his house for over three years.

He is finally able to leave the house with the help of his nurse, Sharona Fleming (Bitty Schram). The breakthrough allows him to work as a private detective and a consultant for the homicide unit despite limitations rooted in his obsessive–compulsive disorder (OCD), which had grown significantly worse after the tragedy.

Monk's compulsive habits are numerous, and a number of phobias compound his situation, such as his fear of germs. Monk has 312 fears, some of which are milk, ladybugs, harmonicas, heights, imperfection, and risk. He however had a breakthrough from claustrophobia later in the series. The OCD and plethora of phobias inevitably lead to very awkward situations and cause problems for Monk and anyone around him as he investigates cases. These same personal struggles, particularly the OCD, are what aid him in solving cases, such as his sharp memory, specific mindset, and attention to detail. In one episode entitled "Mr. Monk and His Biggest Fan", Marci Maven (Sarah Silverman) has compiled a list of all of Adrian's fears. On another episode, he tries to conquer his fears by doing various activities which involved his phobias. For example, he tries drinking milk, climbing a ladder, and putting a ladybug on his hand, but when things are scattered unorganized across a table, he cannot resist the compulsion to arrange them neatly.

Captain Leland Stottlemeyer (Ted Levine) and Lieutenant Randall "Randy" Disher (Jason Gray-Stanford) call on Monk when they have trouble with an investigation. Stottlemeyer is often irritated by Monk's behavior but respects his friend and former colleague's amazing insight and observational abilities, as does Disher. Ever since childhood, Monk's obsessive attention to detail allowed him to spot tiny discrepancies, find patterns, and make connections that others often missed. Monk continues to search for information about his wife's death, the one case that he has been unable to solve, and eventually succeeds in the series finale.

In the middle of season 3, Sharona decides to re-marry her ex-husband and move back to New Jersey, prompting Mr. Monk to hire Natalie Teeger (Traylor Howard) as his new assistant. Natalie is a widow and mother of an eleven-year-old daughter.

Monk has a brother Ambrose (John Turturro) and a half-brother, Jack, Jr. (Steve Zahn), whom Monk never knew about until the fifth season.[2] He later meets Jack, Jr., in season seven in the episode "Mr. Monk's Other Brother". 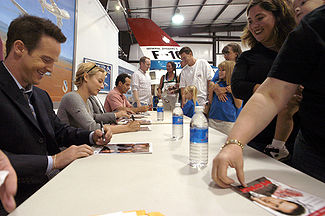 Jason Gray-Stanford, Traylor Howard and Tony Shalhoub sign autographs at Edwards Air Force Base after the filming of the season 4 episode "Mr. Monk and the Astronaut".

Episodes about a murder generally follow one of four basic plot outlines:

There are only a few episodes that do not contain a summation. The first episode not to feature a summation was the season 1 episode "Mr. Monk and the Airplane".

According to an interview with executive producer David Hoberman,[9] ABC first conceived the series as a police show with an Inspector Clouseau-like character suffering from obsessive–compulsive disorder. Hoberman said ABC wanted Michael Richards for the show,[9] but Richards turned it down. Hoberman brought in Andy Breckman as creator, and Breckman, inspired by Sherlock Holmes, introduced Dr. Kroger as a Doctor Watson-like character and an Inspector Lestrade-like character which eventually became Captain Stottlemeyer.

Although ABC originated the show, the network handed it off to the USA Network. USA is now owned by NBC (NBC Universal).[10] Monk was the first ABC Studios-produced show aired on USA Network instead of ABC. Although ABC initially refused Monk, they did air repeats of the show on ABC in the summer and fall of 2002, and then again in the spring of 2004. On January 12, 2006, USA Network announced that Monk had been picked up through at least season six as one of the "highest-rated series in cable history."[11] Season 5 premiered Friday, July 7, 2006, at 9:00 p.m. Eastern time. This marked the first time change for the program, which aired at 10:00 p.m. during its first four seasons. The change allowed the show to work as a lead-in to a new USA Network series, Psych, another offbeat detective program. Monk has followed a consistent format of airing half of its 16 episodes in mid-year and the second half early the following year, with the exception of the first season, which broadcast entirely from July 2002 through October 2002, and the final season, which broadcast entirely between August and December 2009.

Previously aired episodes of Monk began airing on NBC Universal sibling network NBC April 6, 2008. NBC eyed the show because its block with Psych could be plugged into NBC's schedule intact. The shows were being used to increase the amount of scripted programming on the network as production of its own scripted programming ramped back up following the writers' strike.[12] Ratings for the broadcast debut were well below NBC averages for the time period. The show came in third behind Big Brother 9 on CBS and Oprah's Big Give on ABC.[13]

Although set in the San Francisco Bay Area, Monk is for the most part shot elsewhere except for occasional exteriors featuring city landmarks. The pilot episode was shot in Vancouver, British Columbia, and the subsequent Season 1 episodes were shot in the Toronto, Ontario, area.[14] Most of the episodes from Season 2 through Season 6 were filmed in the Los Angeles, California, area, including on-stage at Ren-Mar Studios for seasons 2–5 and at Paramount Studios for season 6. These include Monk’s apartment, Stottlemeyer's precinct house, Dr. Kroger’s office and Natalie’s house.[15] In Season 2, Episode 8, a building for the Toronto Star can also be seen in a cutscene.

Many scenes in Season 4 were shot in San Francisco, downtown in Union Square and Chinatown, as shown in "Mr. Monk Gets Jury Duty", when Stottlemeyer and Disher are chasing a drug lord (Miguel Escobar) up Jackson Street.

During the first season of Monk, the series used a jazzy instrumental intro to the show by songwriter Jeff Beal, performed by guitarist Grant Geissman.[16] The theme won the 2003 Emmy Award for Best Main Title Music.[17]

NYC actor Colter Rule was hired by USA Network to do all radio and TV promos for the series from its inception, lending an ironic, understated tone which contributed to the show's early popularity. The original tag was "Monk! America's Favorite Defective Detective!"

When the second season began, the series received a new theme song, entitled "It's a Jungle out There", by Randy Newman. Reaction to the new theme was mixed. A review of the second season of Monk in the New York Daily News included a wish that producers would revert to the original theme.[18] Shalhoub expressed his support for the new theme in USA Today, saying its "dark and mournful sound,...[its] tongue-in-cheek, darkly humorous side.... completely fits the tone of the show."[19] Newman was awarded the 2004 Emmy Award for Best Main Title Music for "It's a Jungle out There".[20]

As a self-referential to the show controversy, the episode "Mr. Monk and the TV Star" features several characters, including obsessed fan Marci Maven, mentioning a controversy over the change of the show-within-the-show's theme music. In the epilogue of the story, Marci implores Monk to promise her that he will never change the theme music if he ever gets his own show. When Monk agrees to the promise (only so he can go back to bed), the original music is heard as the scene fades to credits, and it plays through the credits.

The original theme is heard in the season 3 episode "Mr. Monk and the Game Show". It is also heard in several other episodes as the show enters the credits and then leads into the new theme's instrumental. Disher plays it on a piano in "Mr. Monk and the Leper".

For the season 6 episode "Mr. Monk and the Rapper", guest star Snoop Dogg performed a hip-hop version of "It's a Jungle out There".

The June 16, 2008, re-airing of the first episode featured a new credit sequence with the Newman theme.

The season 8 episode "Happy Birthday, Mr. Monk" features a slower version of the original theme with a muted trumpet playing the melody.

Randy Newman also wrote a new song for the final episode entitled "When I'm Gone". The song was released on iTunes on December 1, 2009 and won the 2010 Emmy Award for Outstanding Original Music and Lyrics.

For a few episodes where Trudy is featured, a somber but pleasant ending theme was used. The ending theme is last used in "Mr. Monk vs. the Cobra".

USA Network premiered a 10-episode online series entitled "Little Monk" on August 22, 2009. It includes Adrian Monk and Ambrose Monk during their middle-school years, bringing a back story to Monk's detective skills and phobias. However, as they would have been middle schoolers in the late 1960s and early 1970s, viewers will see anachronisms; the various cars seen in the episodes, as well as some of the clothes, do not belong to the period.

A "behind the scenes" audio podcast entitled "Lunch at Monk" is available for download through the USA website.[21] In the podcast, cast and crew members of the show are interviewed over lunch.

Since 2006, during the airing of season 4, Lee Goldberg has produced a series of novels based on the original television series.[22] All of the novels are narrated by Natalie Teeger, Monk's second assistant. For the most part, the novels remain faithful to the television series, with slight discontinuity. Two of the novels were later adapted into regular episodes.