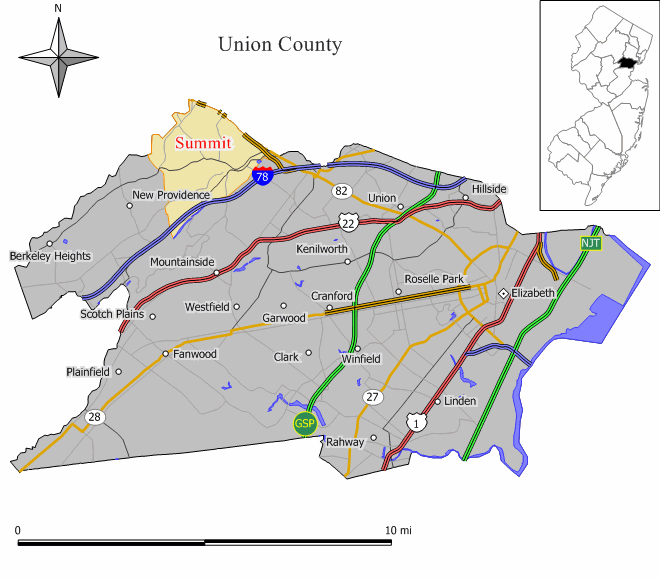 What is now the city of Summit was created as Summit Township by an Act of the on , , from portions of New Providence Township (now Berkeley Heights) and Springfield Township. Summit was reincorporated as a city on , .

Beyond the obvious derivation from its position atop the Second Watchung Mountain, other theories have been offered to account for the city's name. The house in which Jurist lived starting in 1837 called Summit Lodge (today standing at 50 Kent Place Boulevard), and a local sawmill owner who granted passage to the for a route required to climb to "the summit of the Short Hills" have both been offered as the source of the city's name.

"" magazine ranked Summit as its 29th best place to live in its 2008 rankings of the "Best Places To Live" in New Jersey. [ [http://njmonthly.com/articles/best_of/placestolive/best-places-to-live---the-complete-top-towns-list-.html "Best Places To Live - The Complete Top Towns List 1-100"] , "", , . Accessed , .] . Summit is also the 16th wealthiest community in the state of New Jersey.

There were 7,897 households out of which 35.7% had children under the age of 18 living with them, 61.1% were married couples living together, 7.8% had a female householder with no husband present, and 29.0% were non-families. 23.9% of all households were made up of individuals and 10.2% had someone living alone who was 65 years of age or older. The average household size was 2.67 and the average family size was 3.18.

The region in which Summit is located was purchased from Native Americans on , . Summit's earliest European settlers came to the area around the year 1710.

The original name of Summit was "Pie Hill" to distinguish it from the area then known as "The land of the rising sun" (New Providence's original name until 1759). During the period, Summit was known as "Beacon Hill", because bonfire beacons were lit on an eastern ridge in Summit to warn the New Jersey militiamen of approaching British troops. [ [http://www.automatedquickprinting.com/springfield.htm History of Springfield] , accessed , .]

Summit was called the "Heights over Springfield" during the late 18th Century and most of the 19th Century, and was considered a part of New Providence. During this period, Summit was part of a regional government called Springfield Township, which eventually broke up into separate municipalities. Eventually only Summit and New Providence remained joined.

Lord Chancellor who was the Chancellor of New York State and who wrote Commentaries on American Law retired to this area in 1837 in a house he called "Summit Lodge", a source that has been cited as naming the City of Summit.

In 1837, the , which became the and is now the 's , was built over what was then called the "The Summit" hill, and the name was later shortened to Summit.

In 1869, Summit and New Providence separated and the Summit area became the "Township of Summit". The present-day incarnation of Summit, known formally as the City of Summit was incorporated thirty years later on , .

In the 19th Century, Summit served as a nearby getaway spot for wealthy residents of , who were in search of fresh air and a convenient weekend getaway. Weekenders would reach Summit via the railroad, and would relax at large grand hotels and smaller inns and guest houses.Following World War II, the city experienced a great building boom, as living outside New York City and commuting to work became more common and the population of New Jersey grew. At this point, Summit took on its suburban character of tree lined streets and suburban houses that it is known for today. [ [http://www.summitnjhistory.org/AboutSummit.php The City of Summit] , Summit Historical Society. Accessed , .]

Summit is the wealthiest municipality with a city designation in New Jersey, which defies the run-down, high-crime atmosphere of many other New Jersey cities (as opposed to villages, boroughs, and townships).

On , , Summit voters adopted as the Charter of the City of Summit the Statute of 1899 applicable to cities of less than 12,000 population. On , , the enacted a law that repealed all of the remaining provisions of Summit's original Charter and replaced and retained sections not covered by general law and specific to Summit's original Charter. Summit's Charter now allows that "1) The council may, by referendum, change the term of the councilman at large from a two year term to a four year term. 2) Resolutions adopted by the council do not have to be approved by the mayor. 3) The council pro tempore shall be the acting mayor in the mayor's absence due to sickness or other cause. 4) The municipality may appoint an administrator in accordance with the provisions of N.J.S. 40A:9-136. 5) The municipality may adopt an administrative code." [ [http://www.ci.summit.nj.us/pdflibrary/summitcharter.pdf City of Summit City Charter] , City of Summit. Accessed , .]

The is elected by the city for a four year term and is the city's official spokesman and chief elected official. The mayor can appoint various officials, including the and the . He serves as the Chairman of the Board of School Estimate and on various committees, and has the right to speak at Common Council meetings. The mayor can only vote to break ties in the Council and has the right to speak out on issues. This bully pulpit role is considered the mayor's strongest power.

Summit has been considered a stronghold for the Republican Party for years. From 1921 to 2001 no Democrats served in elective office and very few ran for office. The real elections occurred in the Republican Primary. In 2001, Michel Bitritto won a Council seat in Ward I and Jordan Glatt won the at-large council seat. Summit had never elected a Democratic Mayor until 2003, when Jordan Glatt was elected.

Christopher Cotter is the City Administrator of Summit. In this role he directs day to day operations of city government and the city departments. He is a former Fire Chief and Director of Community Services.

Students in Pre-Kindergarten through 12th grade are educated by the . Schools in the district (with 2005-06 enrollment data from the [ [http://nces.ed.gov/ccd/schoolsearch/school_list.asp?Search=1&DistrictID=3415900 Data for the Summit Public Schools] , . Accessed , .] ) are:

*The Summit Diner, located on the corner of Union Place & Summit Ave., is an O'Mahony diner that has wood paneled walls, eight booths and 20 stools. It is an historic diner known for its , Egg & Cheese sandwiches. Local legend says author visited the diner and later used it as a setting for his "The Killers". In the story, two men are sitting at a lunch counter in a diner, and one turns to the other and says, “This is a hot town, ... What do they call it?” “Summit,” says the other. However, this is highly unlikely as the Summit Diner is a O'Mahony 1938 model and Hemingway published his story in 1926. Also, in his definitive biography of Hemingway, Carlos Baker states that the reference by Hemingway was to a small town outside of Chicago (and not to Summit, New Jersey). Carlos Baker, "Ernest Hemingway: A Life Story" (1969).

*Newman Hall is one of Summit's first mansions, built in the late 1800s. It stands at the corner of Morris Avenue and Bedford Road, and was lived in for many years by the Truslow family. Today it houses offices and classrooms used by its owner, Oratory Prep School.

* is another Registered Historic Place, at Springfield Avenue and Edgewood Road. It is home to the Summit Fortnightly Club and the Junior Fortnightly.

*The was originally built in the 1890s by the as a dry entertainment hall and local W.C.T.U. meeting place. It currently houses Winberie's restaurant on the ground floor, and a church, office space, and apartments on the upper floors. It is located at Springfield Avenue and Kent Place Boulevard in downtown Summit.

Don't forget everybody in towns favorite ice-cream store the Magic Fountain. Sitting across from Washington thoose kids are the first to know when it opens.

Information about all of Summit High School's sports teams as well as several local youth athletic associations is available at [http://www.summitsports.org]

Service on the and is available at the Summit station, offering service to and to Penn Station in via the .

in Newark / Elizabeth is approximately 15 minutes away via .

The connected to the defunct (DL&W) in Summit. In the early 20th Century, both freight and passenger service were offered by the . The line is currently out of service. Union County is exploring the possibility of reactivating the line for freight shipments.

A trolley line called the , once ran a passenger trolley through Summit to/from Newark and Morris County, in the early part of the 20th Century. Broad Street in Summit was designed and built for the trolley, which is why it is wider and straighter than most streets in the city. [http://kenconley.com/] Portions of the rails could still be seen on it as late as the 1980s.

Summit had a system, with three routes, in the late 1970s. The mini-buses ran through most parts of Summit on long circular routes that were primarily designed to bring commuters to the railroad station in downtown Summit.

Due to its proximity to and Newark, daily newspapers serving the community are "", "", and "".

Locally, Summit is served by the "Summit Herald-Dispatch" and the "Independent Press", the latter of which is based in New Providence and serves the City of Summit and several surrounding communities. Both newspapers are published on a weekly basis.

The "Alternative Press" is an online daily source for commmunity news and information, covering Summit, New Providence and Berkeley Heights

* is a pharmaceutical company and one of Summit's largest corporate tax-payers. Its facilities in the western part of Summit were previously home to and, before that, . :*The pervasive medication was researched and developed at the facility (now the campus)Fact|date=February 2007
* is a biotechnology company and another large corporate tax-payer that is headquartered in Summit. Its facilities are in the southern part of Summit.

* - owned by the city, at 165 Hobart Ave., and open to the public from sunrise to sunset, free of charge, every day of the year
* - Borders Summit to the south
* Carter House - at 90 Butler Parkway, Summit's oldest known structure, built in 1741, now home to the Summit Historical Society