Route 24 is a state highway in New Jersey, United States, that extends 10.42 mi (16.77 km) from a junction with Interstate 287 in Hanover Township in Morris County, passing southeast through Essex County, and ends at a junction with Interstate 78 in Springfield Township in Union County. The route is a four- to six-lane freeway its entire length. Route 24 is sometimes called the Morris-Essex Turnpike Bypass as it provides a bypass to the Morris and Essex Turnpike, which is now Route 124.[2]

The route was created in 1927 to run from Phillipsburg to Newark, replacing pre-1927 Route 12 from Phillipsburg to Penwell and Pre-1927 Route 5 from Morristown to Newark. The route was extended west to the new Easton–Phillipsburg Toll Bridge in 1938 but was cut back to U.S. Route 22 in the eastern part of Phillipsburg in 1953. The western terminus was cut back further around 1970 to Hackettstown with the route west of there becoming part of Route 57. The freeway alignment of Route 24 between the John F. Kennedy Parkway and Interstate 78 was completed in 1972.

With the completion of this freeway, Route 24 east of the John F. Kennedy Parkway became Route 124. The freeway was completed between the abandoned Tri-Borough Road interchange and the JFK Parkway in the 1970s but was not opened until 1992, when the rest of the freeway to Interstate 287 was completed after years of legal, environmental and budgetary problems. At this time, the alignment of Route 24 between U.S. Route 202 in Morristown and the JFK Parkway became a western extension of Route 124 while the route was officially eliminated between Hackettstown and Morristown as it followed county-maintained routes. The former route between Hackettstown and Morristown is still referred to as Route 24 by many and is still signed as such due to local outcry. 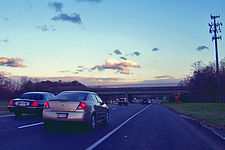 Route 24 begins at an interchange with Interstate 287 in Hanover Township, Morris County, heading southeast on a six-lane freeway. The route interchanges with County Route 511 (Whippany Road) with a westbound exit and eastbound entrance and crosses into Morris Township.[1] Route 24 crosses back into Hanover Township, where it passes over County Route 623 (Park Avenue) and narrows to four lanes, and intersects County Route 510 (Columbia Turnpike) at a cloverleaf interchange near the Morristown Municipal Airport.[1][3] Just past this interchange, the freeway crosses into Florham Park, heading southeast and passing through Madison before crossing back into Florham Park. Route 24 passes under Tri-Borough Road and enters Chatham Borough. An abandoned cloverleaf interchange exists at this location as Tri-Borough Road was to be an extension of the Eisenhower Parkway.[1][3][4]

Route 24 was created in 1927 to run from downtown Phillipsburg at the Northampton Street Bridge over the Delaware River east to Route 25 (now U.S. Route 1/9) in Newark, replacing Pre-1927 Route 12 from Phillipsburg to Penwell and Pre-1927 Route 5 from Morristown to Newark.[5][6] Two spurs of Route 24 numbered Route S24 were created in 1927, both of which were renumbered in the 1953 renumbering. The western Route S24 ran east from Penwell to Hackettstown, and is now mostly Route 57. The eastern Route S24 ran from Springfield to Elizabeth, and is now mostly Route 82.[5][7] In addition, Route 24N was a planning number for the approach to the new Delaware River crossing (the Easton–Phillipsburg Toll Bridge) in Phillipsburg that opened in 1938.[8] However, before the bridge opened, Route 24N was instead built simply as an extension of Route 24. Between 1938 and 1941, this segment was also designated as part of a rerouted U.S. Route 22. In the 1953 renumbering, Route 24’s western terminus was cut back to U.S. Route 22 in eastern Phillipsburg (removing the concurrency in that town) and the incomplete section of Route 24 between Penwell and Long Valley was bridged by signing the route along the former Route S24 and County Route 517.[7] Around 1970, Route 24 west of Hackettstown became part of Route 57.[9][10]

Plans for the Route 24 freeway go back to 1950 when a bypass of the many congested towns along the route was planned; this bypass was designated as a freeway in 1952.[4] In 1959 the freeway was planned on its current alignment, running from Interstate 287 near Morristown to Interstate 78 in Springfield Township, with approval in 1960. In 1962, plans were made to extend the Route 24 freeway west to U.S. Route 22 in Phillipsburg.[4] In the 1970s, this western extension was cut back to U.S. Route 206 in Chester and was put on hold in 1982. It resurfaced in the early 1990s as a bypass completely around Morristown that would rejoin the old two-lane route in Mendham Township; it was scrapped in 1993 due to opposition from officials in Morris and Mendham Townships.[4] In 1970, the Route 24 freeway was planned to become part of a western extension of Interstate 278, which would have run northwest from its current terminus at U.S. Route 1/9 in Linden to Interstate 78, which it would have followed west for a mile to the Route 24 freeway. However, this proposal was rejected by the Federal Highway Administration.[4]

Construction on the section of the Route 24 freeway between the John F. Kennedy Parkway on the Essex/Morris County border and Interstate 78 began in 1967 and was finished in 1972.[4] With the completion of this section, the former alignment of Route 24 between the John F. Kennedy Parkway and the boundary between Maplewood and Irvington, including frontage roads built alongside a portion of the freeway in the Short Hills area, was designated as Route 124. The section across Chatham from the John F. Kennedy Parkway to shortly past the still-existing unused cloverleaf interchange at the Florham Park borough line, once signed as the Tri-Borough Road, a never-built southern extension of the Eisenhower Parkway, was cleared and graded in the early 1970s but it was not opened as it did not provide any connections to existing roads.[4] Plans were made to finish the rest of the freeway to Interstate 287; however construction was halted for many years due to legal, environmental and budgetary problems. Construction finally began on this portion of freeway in 1988. Route 24 was finally completed through to the intersection with Interstate 287 in Hanover Township on November 17, 1992, and at that time the Route 24 designation was limited to strictly that freeway.[4]

Following the completion of the freeway, the former signed route of Route 24 between the junction with U.S. Route 202 in Morristown and the John F. Kennedy Parkway became a western extension of Route 124.[4] The western portion between Route 57 and Route 182 in Hackettstown and U.S. Route 202 officially had the Route 24 designation removed as the road has always been county-maintained rather than state-maintained. The New Jersey Department of Transportation has tried to remove signs from this section, but locals protested because they know it as Route 24.[4] Along this route, the road is known as County Route 517 from the Morris County/Warren County border to the Long Valley section of Washington Township, County Route 513 from Long Valley to Chester Borough, and County Route 510 from Chester Borough to Morristown.[4] This route is also known as Old Route 24 along with its names and county route numbers.[11][12] Many web mapping programs, such as Google Maps,[13] Yahoo! Maps,[14] Bing Maps,[15] and MapQuest,[16] show Route 24 along the route between Hackettstown and Morristown.