A 1655 Swedish nautical chart showing part of the Delaware River. The map is from when Delaware River was under the Swedish colony New Sweden

The Delaware River is a major river on the Atlantic coast of the United States. A Dutch expedition led by Henry Hudson in 1609 first mapped the river. The river was christened the South River in the New Netherland colony that followed, in contrast to the North River, as the Hudson River was then known. The name Delaware, for Sir Thomas West 3rd Baron De La Warr, was used by the English and became standard following the English conquest of New Netherland in 1664.

The river meets tide-water at Trenton, New Jersey. The mean tides below Philadelphia are about 6 feet (1.8 m). Its total length, from the head of the longest branch to Cape May and Cape Henlopen, is 419 miles (674 km), while above the head of Delaware Bay its length is 388 miles (624 km). The length of the main stem of the river alone, to the head of Delaware Bay, is 301 miles (484 km).[1] The mean freshwater discharge of the Delaware River into the estuary is 11,550 cubic feet (330 m³) per second.

The Delaware River is one of nineteen "Great Waters" recognized by the America's Great Waters Coalition.[2]

The magnitude of the commerce of Philadelphia has made the improvements of the river below that port of great importance. Small improvements were attempted by Pennsylvania as early as 1771. Commerce was once important on the upper river, primarily prior to railway competition (1857).

The West or Mohawk branch rises in Schoharie County, New York, about 1,886 feet (575 m) above sea level, near Mount Jefferson, and flows tortuously through the plateau in a deep trough, impounded at one point to create the Cannonsville Reservoir, and then becoming the state boundary of New York and Pennsylvania at the 42nd parallel, until it emerges from the Catskills.

Similarly, the East Branch begins from a small pond south of Grand Gorge in the town of Roxbury in Delaware County, flowing southwest toward its impoundment by New York City to create the Pepacton Reservoir, the largest reservoir in the New York City water supply system. Its tributaries are the Beaver Kill River and the Willowemoc Creek which enter into the river ten miles (16 km) before the West Branch meets the East Branch. The confluence of the two branches is just south of Hancock.

Both the East Branch and West Branch of the Delaware River parallel each other, both flowing in a southwesterly direction.

From Hancock, the river flows between The Poconos and the lowered shale beds north of the Catskills. The river flows down a broad Appalachian valley, passing Hawk's Nest overlook on the Upper Delaware Scenic Byway. At Port Jervis, New York, it enters the Port Jervis trough. At this point, the Walpack Ridge deflects the Delaware into the Minisink Valley, where it follows the southwest strike of the eroded Marcellus Formation beds along the Pennsylvania–New Jersey state line for 25 miles (40 km) to the end of the ridge at Walpack Bend in the Delaware Water Gap National Recreation Area.[3][4]

The Minisink is a buried valley where the Delaware flows in a bed of glacial till that buried the eroded bedrock during the last glacial period. It then skirts the Kittatinny ridge, which it crosses at the Delaware Water Gap, between nearly vertical walls of sandstone, quartzite, and conglomerate, and then passes through a quiet and charming country of farm and forest, diversified with plateaus and escarpments, until it crosses the Appalachian plain and enters the hills again at Easton, Pennsylvania. From this point it is flanked at intervals by fine hills, and in places by cliffs, of which the finest are the Nockamixon Rocks, 3 miles (5 km) long and above 200 feet (61 m) high.

At Trenton there is a fall of 8 feet (2.4 m). Below Trenton the river flows between Philadelphia and New Jersey before becoming a broad, sluggish inlet of the sea, with many marshes along its side, widening steadily into its great estuary, Delaware Bay.

The main tributaries in New York are the Mongaup and Neversink rivers and Callicoon Creek. From Pennsylvania, the major tributaries are the Lackawaxen, Lehigh, and Schuylkill rivers. From New Jersey, the Big Flatbrook, Pequest, Musconetcong, and Maurice rivers, plus Oldmans, Raccoon and Rancocas creeks, flow into the Delaware.

The Delaware Water Gap National Recreation Area came about because of a plan to build a dam on the Delaware River at Tocks Island, just north of the Delaware Water Gap to control water levels for flood control and hydroelectric power generation. The dam would have created a 37-mile (60 km) lake in the center of present park for use as a reservoir. Starting in 1960, the present day area of the Recreation Area was acquired for the Army Corps of Engineers through eminent domain. Between 3,000 and 5,000 dwellings were demolished, including historical sites, and about 15,000 people were displaced by the project. 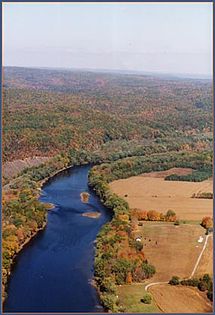 Delaware above Walpack Bend, where it leaves the buried valley eroded from Marcellus Shale bedrock

Because of massive environmental opposition, dwindling funds, and an unacceptable geological assessment of the dam's safety, the government transferred the property to the National Park Service in 1978. The National Park Service found itself as the caretaker of the previously endangered territory, and with the help of the federal government and surrounding communities, developed recreational facilities and worked to preserve the remaining historical structures.[5][6]

However, the lack of a flood control dam on the river left it vulnerable to flooding, and it has experienced a number of serious flooding events as the result of snow melt or rain run-off from heavy rainstorms. Record flooding occurred in August 1955, in the aftermath of the passing of the remnants of two separate hurricanes over the area within less than a week: first Hurricane Connie and then Hurricane Diane, which was, and still is, the wettest tropical cyclone to have hit the northeastern United States. The river gauge at Riegelsville, Pennsylvania recorded an all time record crest of 38.85 feet (11.84 m) on August 19, 1955.

The Delaware River Basin Commission, along with local governments, is working to try to address the issue of flooding along the river. As the past few years have seen a rise in catastrophic floods, most residents of the river basin feel that something must be done. The local governments have worked in association with FEMA to address many of these problems, however, due to insufficient federal funds, progress is slow.[8]

After New York City had made 15 reservoirs to supply water to the city's growing population, the city tried to gain permission to make five reservoirs along the Delaware River's tributaries. However, they were denied the permission to impound the Delaware's tributaries to make new reservoirs. So in 1928, New York City decided to draw water from the Delaware River to feed the population boom that had started during the beginning of the Great Depression. However, villages and towns across the river in Pennsylvania were already using the Delaware for their water supply. The two sides eventually took their case to the U.S. Supreme Court, and in 1931, New York City was finally allowed to draw 440 million US gallons (1,700,000 m3) of water a day from the Delaware and its upstream tributaries. 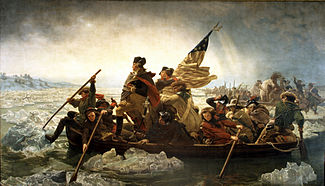 Main article: List of crossings of the Delaware River

Washington's crossing of the Delaware

Perhaps the most famous “Delaware Crossing” involved the improvised boat crossing undertaken by George Washington’s army during the American Revolution on Christmas Day, 1776. This led to a successful surprise attack on the Hessian troops occupying Trenton, New Jersey. 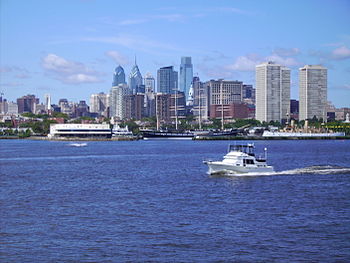 The Delaware River at Philadelphia