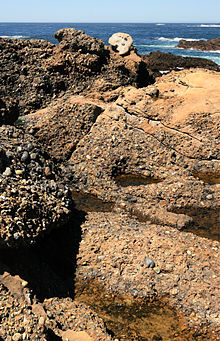 /kəŋˈɡlɒmərɨt/) is a rock consisting of individual clasts within a finer-grained matrix that have become cemented together. Conglomerates are sedimentary rocks consisting of rounded fragments and are thus differentiated from breccias, which consist of angular clasts.[1] Both conglomerates and breccias are characterized by clasts larger than sand (>2 mm).

In addition to the factors described in this section, conglomerates are classified in terms of both their rounding and sorting.

Paraconglomerates consist of a matrix-supported rock that contains at least 15% sand-sized or smaller grains (<2 mm), the rest being larger grains of varying sizes.[2]

Orthoconglomerates consist of a clast-supported rock with less than 15% matrix of sand and finer particles.[3] 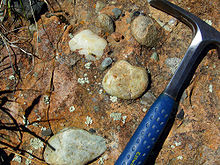 A conglomerate at the base of the Cambrian in the Black Hills, South Dakota.

Conglomerates are classified for the lithologies of the clasts[4]

Conglomerates are also classified by the dominant clast size.

Conglomerates are deposited in a variety of sedimentary environments.

In turbidites, the basal part of a bed is typically coarse-grained and sometimes conglomeratic. In this setting, conglomerates are normally very well sorted, well-rounded and often with a strong A-axis type imbrication of the clasts.[5]

Conglomerates are normally present at the base of sequences laid down during marine trangressions above an unconformity, and are known as basal conglomerates. They represent the position of the shoreline at a particular time and will be diachronous.[6]

Conglomerates deposited in fluvial environments are typically well-rounded and well-sorted. Clasts of this size are carried as bedload and only at times of high flow-rate. The maximum clast size decreases as the clasts are transported further due to attrition, so conglomerates are more characteristic of immature river systems. In the sediments deposited by mature rivers, conglomerates are generally confined to the basal part of a channel fill where they are known as pebble lags.[7] Conglomerates deposited in a fluvial environment often have an AB-plane type imbrication.

Alluvial deposits are formed in areas of high relief and are typically coarse-grained. At mountain fronts individual alluvial fans merge together to form braidplains and these two environments are associated with the thickest deposits of conglomerates. The bulk of conglomerates deposited in this setting are clast-supported with a strong AB-plane imbrication. Some matrix-supported conglomerates are present, a result of debris-flow deposition on some alluvial fans.[5]

Glaciers carry a lot of coarse-grained material and many glacial deposits are conglomeratic. Tillites, the sediments deposited directly by a glacier, are typically poorly-sorted, matrix-supported conglomerates. The matrix is generally fine-grained, consisting of finely milled rock fragments. Waterlain deposits associated with glaciers are often conglomeratic, forming structures such as eskers.[7]

A spectacular example of conglomerate can be seen at Montserrat, near Barcelona. Here erosion has created vertical channels giving the characteristic jagged shapes for which the mountain is named (Montserrat literally means "jagged mountain"). The rock is strong enough to be used as a building material - see Montserrat abbey front at full resolution for detail of the rock structure.

Another spectacular example of conglomerate, the Crestone Conglomerate may be viewed in and near the town of Crestone, at the foot of the Sangre de Cristo Range in Colorado's San Luis Valley. The Crestone Conglomerate is a metamorphic rock stratum and consists of tiny to quite large rocks that appear to have been tumbled in an ancient river. Some of the rocks have hues of red and green.

Impressive conglomerate cliffs are to be seen on the east coast of Scotland from Arbroath northwards along the coastlines of the former counties of Angus and Kincardineshire. Famously picturesque Dunottar Castle sits on a rugged promontory of conglomerate jutting into the North Sea just south of the town of Stonehaven.

Conglomerate may also be seen in the domed hills of Kata Tjuta, in Australia's Northern Territory.

In the nineteenth century a thick layer of Pottsville conglomerate was recognized to underlie anthracite coal measures in Pennsylvania.[8] 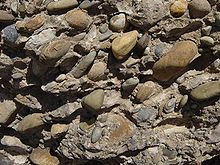 When a series of conglomerates accumulates into an alluvial fan, in rapidly eroding (e.g. desert) environments, the resulting rock unit is often called a fanglomerate. These form the basis of a number of large oil fields, e.g. the Tiffany and Brae fields in the North Sea. These fanglomerates were actually deposited into a deep marine environment but against a rapidly moving fault line, which supplied an intermittent stream of debris into the conglomerate pile. The sediment fans are several kilometers deep at the fault line and the sedimentation moved focus repeatedly, as different sectors of the fault moved.