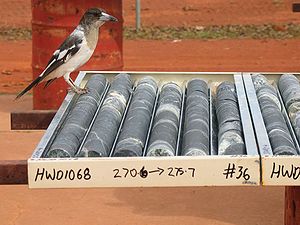 Rock core samples. The product of a Diamond rig. (The bird is a Pied Butcherbird.)

A core sample is a cylindrical section of (usually) a naturally occurring substance. Most core samples are obtained by drilling with special drills into the substance, for example sediment or rock, with a hollow steel tube called a core drill. The hole made for the core sample is called the "core hole". A variety of core samplers exist to sample different media under different conditions. More continue to be invented on a regular basis. In the coring process, the sample is pushed more or less intact into the tube. Removed from the tube in the laboratory, it is inspected and analyzed by different techniques and equipment depending on the type of data desired.

Core samples can also be taken to test the properties of manmade materials, such as concrete, ceramics, some metals and alloys, especially the softer ones. Core samples can be taken of living things, including human beings, especially of a person's bones for microscopic examination to help diagnose diseases.

The composition of the subject materials can vary from almost liquid to the strongest materials found in nature or technology, and the location of the subject materials can vary from on the laboratory bench to over 10 km from the surface of the Earth in a borehole. The range of equipment and techniques applied to the task is correspondingly great. Core samples are most often be taken with their long axis oriented roughly parallel to the axis of a borehole, or parallel to the gravity field for the gravity-driven tools. However it is also possible to take core samples from the wall of an existing borehole. Taking samples from an exposure, albeit an overhanging rock face or on a different planet, is almost trivial. (The Mars Exploration Rovers carry a Rock Abrasion Tool which is logically equivalent to the "rotary sidewall core" tool described below.)

Some common techniques include :

Management of cores and data

Although often neglected, core samples always degrade to some degree in the process of cutting the core, handling it, and studying it. Non-destructive techniques are increasingly common (e.g. the use of MRI scanning to characterise grains, pore fluids, pore spaces (porosity) and their interactions (constituting part of permeability) but such expensive subtlety is likely wasted on a core that has been shaken on an unsprung lorry for 300 km of dirt road. What happens to core between the retrieval equipment and the final laboratory (or archive) is an oft-neglected part of record keeping and core management. Equally, a core sample which cannot be related to its context (where it was before it became a core sample) has lost much of its benefit. The identification of the borehole, and the position and orientation ("way up") of the core in the borehole is critical, even if the borehole is in a tree trunk - dendrochronologists always try to include a bark surface in their samples so that the date of most-recent growth of the tree can be unambiguously determined.

If these data become separated from core samples, it is generally impossible to regain that data. The cost of a coring operation can vary from a few currency units (for a hand-caught core from a soft soil section) to tens of millions of currency units (for sidewall cores from a remote-area offshore borehole many kilometres deep). Inadequate recording of such basic data has ruined the utility of both types of core.

Different disciplines have different local conventions of recording these data, and the user should familiarise themselves with their area's conventions. For example, in the oil industry, orientation of the core is typically recorded by marking the core with two longitudinal colour streaks, with the red one on the right when the core is being retrieved and marked at surface. Cores cut for mineral mining may have their own, different, conventions. Civil engineering or soil studies may have their own, different, conventions as their materials are often not competent enough to make permanent marks on.

It is becoming increasingly common to retain core samples in cylindrical packaging which forms part of the core-cutting equipment, and to make the marks of record on these "inner barrels" in the field prior to further processing and analysis in the laboratory. Sometimes core is shipped form the field to the laboratory in as long a length as it comes out of the ground; other times it is cut into standard lengths (5m or 1m or 3 ft) for shipping, then reassembled in the laboratory. Some of the "inner barrel" systems are capable of being reversed on the core sample, so that in the laboratory the sample goes "wrong way up" when the core is reassembled. This can complicate interpretation.

If the borehole has petrophysical measurements made of the wall rocks, and these measurements are repeated along the length of the core then the two data sets correlated, one will almost universally find that the depth "of record" for a particular piece of core differs between the two methods of measurement. Which set of measurements to believe then becomes a matter of policy for the client (in an industrial setting) or of great controversy (in a context without an overriding authority. Recording that there are discrepancies, for whatever reason, retains the possibility of correcting an incorrect decision at a later date ; destroying the "incorrect" depth data makes it impossible to correct a mistake later. Any system for retaining and archiving data and core samples needs to be designed so that dissenting opinion like this can be retained.

If core samples from a campaign are competent, it is common practice to "slab" them - cut the sample into two or more samples longitudinally - quite early in laboratory processing so that one set of samples can be archived early in the analysis sequence as a protection against errors in processing. "Slabbing" the core into a 2/3 and a 1/3 set is common. It is also common for one set to be retained by the main customer while the second set goes to the government (who often impose a condition for such donation as a condition of exploration/ exploitation licensing). "Slabbing" also has the benefit of preparing a flat, smooth surface for examination and testing of profile permeability, which is very much easier to work with than the typically rough, curved surface of core samples when they're fresh from the coring equipment. Photography of raw and "slabbed" core surfaces is routine, often under both natural and ultra-violet light.

The technique of coring long predates attempts to drill into the Earth’s mantle by the Deep Sea Drilling Program. The value to oceanic and other geologic history of obtaining cores over a wide area of sea floors soon became apparent. Core sampling by many scientific and exploratory organizations expanded rapidly. To date hundreds of thousands of core samples have been collected from floors of all the planet’s oceans and many of its inland waters.

Access to many of these samples is facilitated by the Index to Marine & Lacustrine Geological Samples,

"A collaboration between twenty institutions and agencies that operate geological repositories."

The above agency keeps a record of the samples held in the repositories of its member organizations. Data includes

Scientific coring began as a method of sampling the ocean floor. It soon expanded to lakes, ice, mud, soil and wood. Cores on very old trees give information about their growth rings without destroying the tree.

Cores indicate variations of climate, species and sedimentary composition during geologic history. The dynamic phenomena of the Earth’s surface are for the most part cyclical in a number of ways, especially temperature and rainfall.

There are many ways to date a core. Once dated, it gives valuable information about changes of climate and terrain. For example, cores in the ocean floor, soil and ice have altered the view of the geologic history of the Pleistocene entirely.