ConocoPhillips Company (NYSE: COP) is an American multinational energy corporation with its headquarters located in the Energy Corridor district of Houston, Texas in the United States. It is also one of the Fortune 500 companies[3] and 22nd on Forbes Global 2000.[4][5]ConocoPhillips is the fifth largest private sector energy corporation in the world and is one of the six "supermajor" vertically integrated oil companies. It sells fuel under the Conoco, Phillips 66 and Union 76 brands in North America, and Jet in Europe. ConocoPhillips was created through the merger of Conoco Inc. and the Phillips Petroleum Company on August 30, 2002.[6] 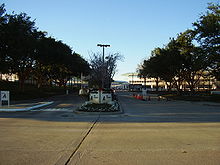 ConocoPhillips headquarters in the Energy Corridor area of Houston

Conoco Inc. was an American oil company founded in 1875 as the Continental Oil and Transportation Company. Based in Ogden, Utah, the company was a coal, oil, kerosene, grease and candles distributor in the West. Marland Oil Company (founded by exploration pioneer E. W. Marland) later acquired the assets (subject to liabilities) of Continental Oil Company, for a consideration of 2,317,266 shares of stock. On June 26, 1929, Marland Oil changed its name to Continental Oil Company and moved its headquarters to Ponca City, Oklahoma. The acquisition gave Conoco the red bar-and-triangle logo previously used by Marland. Conoco used the logo between 1930 and 1970, when the current red capsule logo was adopted.

The actual recording of the acquisition or merger between Conoco and Continental Oil Company is undocumented in many states where each entity had or has operations.[citation needed]

In 2005, ConocoPhillips began rebranding its (Union) 76 gas stations, which Phillips had acquired from Tosco Corporation before the merger with Conoco. The move prompted a petition campaign by fans hoping to save the historic 76 orange ball signage.[7] On January 20, 2007, a Wall Street Journal article on the petition campaign included a statement from ConocoPhillips that it was changing course and would save several dozen orange and blue 76 balls to give to museums.[citation needed] The company also announced that it would fabricate about 100 new 76 ball signs in the ConocoPhillips color scheme of red and blue, to be placed at select 76 stations.

In March 2006, ConocoPhillips bought Wilhelmshavener Raffineriegesellschaft mbH in Germany, and Burlington Resources in the United States.

On May 10, 2006, Richard Armitage, former deputy-secretary of the U.S. State Department, was elected to the board of directors of the ConocoPhillips oil company.

In 2007 the Chevron Corporation purchased all of the Conoco gas stations in Mississippi to the Texaco brand, a process to be completed by the end of the year.

In late 2009 the company announced asset sales to increase investor returns. Included are debt reduction and stock buy back. In march 2011 the program was enlarged up to $10 billion assets sales in the next two years.[8]

ConocoPhillips intends to implement a floating liquefied natural gas facility by 2016-2019, and has completed quantitative risk analysis of a design that will undergo pre-feed study in 2011.[9]

On July 14, 2011, ConocoPhillips announced its intent to separate the company’s upstream and downstream businesses into two stand-alone, publicly traded corporations, with the intent of maximizing shareholder value. Following the separation, ConocoPhillips will be a large and geographically diverse exploration and production company with a diversified portfolio, and sufficient size and scale to compete globally. Refining and marketing will be done by the independent Downstream Company. The separation of the companies is expected to be complete in the second quarter of 2012.[10]

Polar Tankers is the US Flagged shipping arm of ConocoPhillips.[11]

ConocoPhillips is a signatory participant of the Voluntary Principles on Security and Human Rights.

ConocoPhillips operates 19 refineries around the world.

In the United States, the company operates Conoco, Phillips 66 and (Union) 76 stations. The 76 brand, long familiar in the western and southern U.S., was created by Union Oil Company of California (later Unocal) in 1932.

In Europe, ConocoPhillips operates Jet filling stations in Austria, Denmark, Germany, Sweden and the United Kingdom. It sold its Jet stations in Belgium, the Czech Republic, Finland, Hungary, Poland and Slovakia to its Russian affiliate, Lukoil. It uses the COOP identity in Switzerland, and in 2010 sold its Norwegian chain (and 40 Swedish stations) to the Finnish company St1.

The company formerly marketed under the ProJET brand name in Malaysia and Turkpetrol in Turkey. 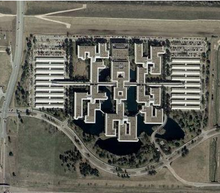 Aerial view of the ConocoPhillips headquarters

The headquarters of ConocoPhillips are located in the Energy Corridor district of Houston, Texas.[15] By 2002 the groups organizing the measure had selected Houston as the site of the headquarters. Governor of Oklahoma Frank Keating said that the move to Houston was "regrettable." The Journal Record stated that Archie Dunham, the CEO of Conoco Inc., "apparently highlighted the lack of direct international air travel from Oklahoma as a key drawback for the merged firm."[16] The ConocoPhillips headquarters, originally the headquarters of Conoco Inc., was formerly known as the Conoco Center.[17][18]

On April 11, 2007, ConocoPhillips became the first U.S. oil company to join the U.S. Climate Action Partnership, an alliance of big business and environmental groups. The partnership in January 2007 had advised President George W. Bush that mandatory emissions caps would be needed to reduce the flow of carbon dioxide and other heat-trapping gases into the atmosphere. In 2007 ConocoPhillips announced it would spend $150 million that year on the research and development of new energy sources and technologies — a 50 percent increase in spending from 2006.[19] However, ConocoPhillips left the U.S. Climate Action Partnership in February, 2010.[20]

In 2003, ConocoPhillips was named as a defendant in a lawsuit brought by Green Alternative, an environmental group based in the former Soviet republic of Georgia. The suit claimed that a number of foreign oil companies colluded with the Georgian government to induce authorities to approve a $3 billion pipeline without properly evaluating the environmental impact.[22]

In June 2011, ConocoPhillips China Inc., a wholly owned subsidiary of ConocoPhillips,[23] was responsible for an oil spill at the Penglai 19-3 oil field in Bohai Bay. [24]