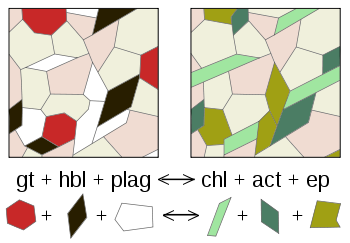 Schematic representation of a metamorphic reaction. Abbreviations of minerals: act = actinolite; chl = chlorite; ep = epidote; gt = garnet; hbl = hornblende; plag = plagioclase. Two minerals represented in the figure do not participate in the reaction, they can be quartz and K-feldspar. This reaction takes place in nature when a rock goes from amphibolite facies to greenschist facies.

Metamorphism is the solid-state recrystallization of pre-existing rocks due to changes in physical and chemical conditions, primarily heat, pressure, and the introduction of chemically active fluids. Mineralogical, chemical and crystallographic changes can occur during this process. Changes at or just beneath Earth's surface due to weathering and/or diagenesis are not classified as metamorphism.[1]

The temperature lower limit of metamorphism is considered to be 100 - 200°C,[2] to exclude diagenetic changes, due to compaction, which result in sedimentary rocks. There is no agreement on a pressure lower limit. Some workers argue that changes in atmospheric pressures are not metamorphic, but some types of metamorphism can occur at extremely low pressures (see below).

The upper boundary of metamorphic conditions is related to the onset of melting processes in the rock. The maximum temperature for metamorphism is typically 700 - 900°C, depending on the pressure and on the composition of the rock. Migmatites are rocks formed at this upper limit, which contain pods and veins of material that has started to melt but has not fully segregated from the refractory residue. Since the 1980s it has been recognized that, rarely, rocks are dry enough and of a refractory enough composition to record without melting "ultra-high" metamorphic temperatures of 900 - 1100°C.

Regional or Barrovian metamorphism covers large areas of continental crust typically associated with mountain ranges, particularly subduction zones or the roots of previously eroded mountains. Conditions producing widespread regionally metamorphosed rocks occur during an orogenic event. The collision of two continental plates or island arcs with continental plates produce the extreme compressional forces required for the metamorphic changes typical of regional metamorphism. These orogenic mountains are later eroded, exposing the intensely deformed rocks typical of their cores. The conditions within the subducting slab as it plunges toward the mantle in a subduction zone also produce regional metamorphic effects. The techniques of structural geology are used to unravel the collisional history and determine the forces involved. Regional metamorphism can be described and classified into metamorphic facies or metamorphic zones of temperature/pressure conditions throughout the orogenic terrane.

Contact metamorphism is greater adjacent to the intrusion and dissipates with distance from the contact. The size of the aureole depends on the heat of the intrusion, its size, and the temperature difference with the wall rocks. Dikes generally have small aureoles with minimal metamorphism whereas large ultramafic intrusions can have significantly thick and well-developed contact metamorphism.

Magmatic fluids coming from the intrusive rock may also take part in the metamorphic reactions. Extensive addition of magmatic fluids can significantly modify the chemistry of the affected rocks. In this case the metamorphism grades into metasomatism. If the intruded rock is rich in carbonate the result is a skarn. Fluorine-rich magmatic waters which leave a cooling granite may often form greisens within and adjacent to the contact of the granite. Metasomatic altered aureoles can localize the deposition of metallic ore minerals and thus are of economic interest.

Hydrothermal metamorphism is the result of the interaction of a rock with a high-temperature fluid of variable composition. The difference in composition between existing rock and the invading fluid triggers a set of metamorphic and metasomatic reactions. The hydrothermal fluid may be magmatic (originate in an intruding magma), circulating groundwater, or ocean water. Convective circulation of hydrothermal fluids in the ocean floor basalts produces extensive hydrothermal metamorphism adjacent to spreading centers and other submarine volcanic areas. The fluids eventually escape through vents in the ocean floor known as black smokers.[4] The patterns of this hydrothermal alteration is used as a guide in the search for deposits of valuable metal ores.

This kind of metamorphism occurs when either an extraterrestrial object (a meteorite for instance) collides with the Earth's surface or during an extremely violent volcanic eruption. Impact metamorphism is, therefore, characterized by ultrahigh pressure conditions and low temperature. The resulting minerals (such as SiO2 polymorphs coesite and stishovite) and textures are characteristic of these conditions.

Dynamic metamorphism is associated with zones of high to moderate strain such as fault zones. Cataclasis, crushing and grinding of rocks into angular fragments, occurs in dynamic metamorphic zones, giving cataclastic texture.

The textures of dynamic metamorphic zones are dependent on the depth at which they were formed, as the temperature and confining pressure determine the deformation mechanisms which predominate. Within depths less than 5 km, dynamic metamorphism is not often produced because the confining pressure is too low to produce frictional heat. Instead, a zone of breccia or cataclasite is formed, with the rock milled and broken into random fragments. This generally forms a mélange. At depth, the angular breccias transit into a ductile shear texture and into mylonite zones.

Within the depth range of 5–10 km pseudotachylite is formed, as the confining pressure is enough to prevent brecciation and milling and thus energy is focused into discrete fault planes. Frictional heating in this case may melt the rock to form pseudotachylite glass.

Within the depth range of 10–20 km, deformation is governed by ductile deformation conditions and hence frictional heating is dispersed throughout shear zones, resulting in a weaker thermal imprint and distributed deformation. Here, deformation forms mylonite, with dynamothermal metamorphism observed rarely as the growth of porphyroblasts in mylonite zones.

Overthrusting may juxtapose hot lower crustal rocks against cooler mid and upper crust blocks, resulting in conductive heat transfer and localised contact metamorphism of the cooler blocks adjacent to the hotter blocks, and often retrograde metamorphism in the hotter blocks. The metamorphic assemblages in this case are diagnostic of the depth and temperature and the throw of the fault and can also be dated to give an age of the thrusting.

Metamorphic rocks are classified by their mineral composition, the source rock, also known as a protolith, and the context (pressure, temperature, hydrological features, etc.) of its formation.

Metamorphic facies are recognizable terranes or zones with an assemblage of key minerals that were in equilibrium under specific range of temperature and pressure during a metamorphic event. The facies are named after the metamorphic rock formed under those facies conditions from basalt. Facies relationships were first described by Pentti Eskola in 1921. 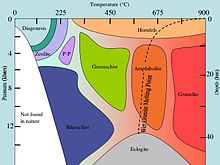 Metamorphic Facies with regard to temperature and pressure

In the Barrovian sequence (described by George Barrow in zones of progressive metamorphism in Scotland), metamorphic grades are also classified by mineral assemblage based on the appearance of key minerals in rocks of pelitic (shaly, aluminous) origin:

Phase change metamorphism is the creating of new minerals with the same chemical formula as the protolith. This involves a rearrangement of the atoms in the crystals.

Neocrystallization involves the creation of new mineral crystals different from the protolith. Chemical reactions digest the minerals of the protolith which yields new minerals. This is a very slow process as it can also involve the diffusion of atoms through solid crystals.

Pressure solution is a metamorphic process that requires a rock to be under strong pressure from one direction and in the presence of hot water. During this process mineral of the protolith partially dissolve, diffuse through the water and precipitate elsewhere.

In plastic deformation pressure is applied to the protolith, which causes it to shear or bend, but not break. In order for this to happen temperatures must be high enough that brittle fractures do not occur, but not so high that diffusion of crystals takes place.[6]

Retrograde metamorphism involves the reconstitution of a rock via revolatisation under decreasing temperatures (and usually pressures), allowing the mineral assemblages formed in prograde metamorphism to revert to those more stable at less extreme conditions. This is a relatively uncommon process, because volatiles must be present.