Thrust fault in the Qilian Shan, China. The older (left, blue and red) thrust over the younger (right, brown).

A thrust fault is a type of fault, or break in the Earth's crust across which there has been relative movement, in which rocks of lower stratigraphic position are pushed up and over higher strata. They are often recognized because they place older rocks above younger. Thrust faults are the result of compressional forces.

Diagram of the evolution of a fault-bend fold or 'ramp anticline' above a thrust ramp, the ramp links decollements at the top of the green and yellow layers

Diagram of the evolution of a fault propagation fold

Development of thrust duplex by progressive failure of ramp footwall

If the fault plane terminates before it reaches the Earth's surface, it is referred to as a blind thrust fault. Because of the lack of surface evidence, blind thrust faults are difficult to detect until they rupture. The destructive 1994 quake in Northridge, California was caused by a previously-undiscovered blind thrust fault.

Because of their low dip, thrusts are also difficult to appreciate in mapping, where lithological offsets are generally subtle and stratigraphic repetition difficult to detect especially in peneplanated areas.

Thrust faults, particularly those involved in thin-skinned style of deformation, have a so-called ramp-flat geometry. Thrusts mostly propagate along zones of weakness within a sedimentary sequence, such as mudstones or salt layers, these parts of the thrust are called flats. If the effectiveness of the decollement becomes reduced the thrust will tend to cut up the section to a higher stratigraphic level, until it reaches another effective decollement where it can continue as bedding parallel flat. The part of the thrust linking the two flats is known as a ramp and typically forms at an angle of about 15°-30° to the bedding. Continued displacement on a thrust over a ramp produces a characteristic fold geometry known as a ramp anticline or, more generally, as a fault-bend fold.

Fault-propagation folds form at the tip of a thrust fault where propagation along the decollement has ceased but displacement on the thrust behind the fault tip is continuing. The continuing displacement is accommodated by formation of an asymmetric anticline-syncline fold pair. As displacement continues the thrust tip starts to propagate along the axis of the syncline. Such structures are also known as tip-line folds. Eventually the propagating thrust tip may reach another effective decollement layer and a composite fold structure will develop with characteristics of both fault-bend and fault-propagation folds.

Duplexes occur where there are two decollement levels close to each other within a sedimentary sequence, such as the top and base of a relatively strong sandstone layer bounded by two relatively weak mudstone layers. When a thrust that has propagated along the lower detachment, known as the floor thrust, cuts up to the upper detachment, known as the roof thrust, it forms a ramp within the stronger layer. With continued displacement on the thrust, higher stresses are developed in the footwall of the ramp due to the bend on the fault. This may cause renewed propagation along the floor thrust until it again cuts up to join the roof thrust. Further displacement then takes place via the newly created ramp. This process may repeat many times, forming a series of fault bounded thrust slices known as imbricates or horses, each with the geometry of a fault-bend fold of small displacement. The final result is typically a lozenge shaped duplex.

Duplexing is a very efficient mechanism of accommodating shortening of the crust by thickening the section rather than by folding and deformation.[1] 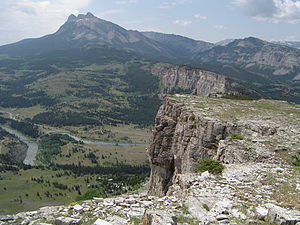 An example of Thin-skinned deformation (thrusting) in Montana. Note the white Madison Limestone repeated, with one example in the foreground (that pinches out with distance) and another to the upper right corner and top of the picture.

These conditions exist in the orogenic belts that result from either two continental tectonic collisions or from subduction zone accretion.

The resultant compressional forces produce mountain ranges. The Himalayas, the Alps, and the Appalachians are prominent examples of compressional orogenies with numerous overthrust faults.

Thrust faults occur in the foreland basin which occur marginal to orogenic belts. Here, compression does not result in appreciable mountain building, which is mostly accommodated by folding and stacking of thrusts. Instead thrust faults generally cause a thickening of the stratigraphic section.

Foreland basin thrusts also usually observe the ramp-flat geometry, with thrusts propagating within units at a very low angle "flats" (at 1-5 degrees) and then moving up-section in steeper ramps (at 5-20 degrees) where they offset stratigraphic units. Identifying ramps where they occur within units is usually problematic.

Thrusts and duplexes are also found in accretionary wedges in the ocean trench margin of subduction zones, where oceanic sediments are scraped off the subducted plate and accumulate. Here, the accretionary wedge must thicken by up to 200% and this is achieved by stacking thrust fault upon thrust fault in a melange of disrupted rock, often with chaotic folding. Here, ramp flat geometries are not usually observed because the compressional force is at a steep angle to the sedimentary layering.

Thrust faults were unrecognised until the work of Escher, Heim and Bertrand in the Alps working on the Glarus Thrust, Lapworth, Peach and Horne working on parts of the Moine Thrust Scotland, Tornebohm in the Scandinavian Caledonides and McConnell in the Canadian Rockies.[2] The realisation that older strata could, via faulting, be found above younger strata, was arrived at more or less independently by geologists in all these areas during the 1880s. Geikie in 1884 coined the term thrust to describe this special set of faults.

"By a system of reversed faults, a group of strata is made to cover a great breadth of ground and actually to overlie higher members of the same series. The most extraordinary dislocations, however, are those to which for distinction we have given the name of Thrust-planes. They are strictly reversed faults, but with so low a hade that the rocks on their upthrown side have been, as it were, pushed horizontally forward." Archibald Geikie 1884, Nature.[3][4]