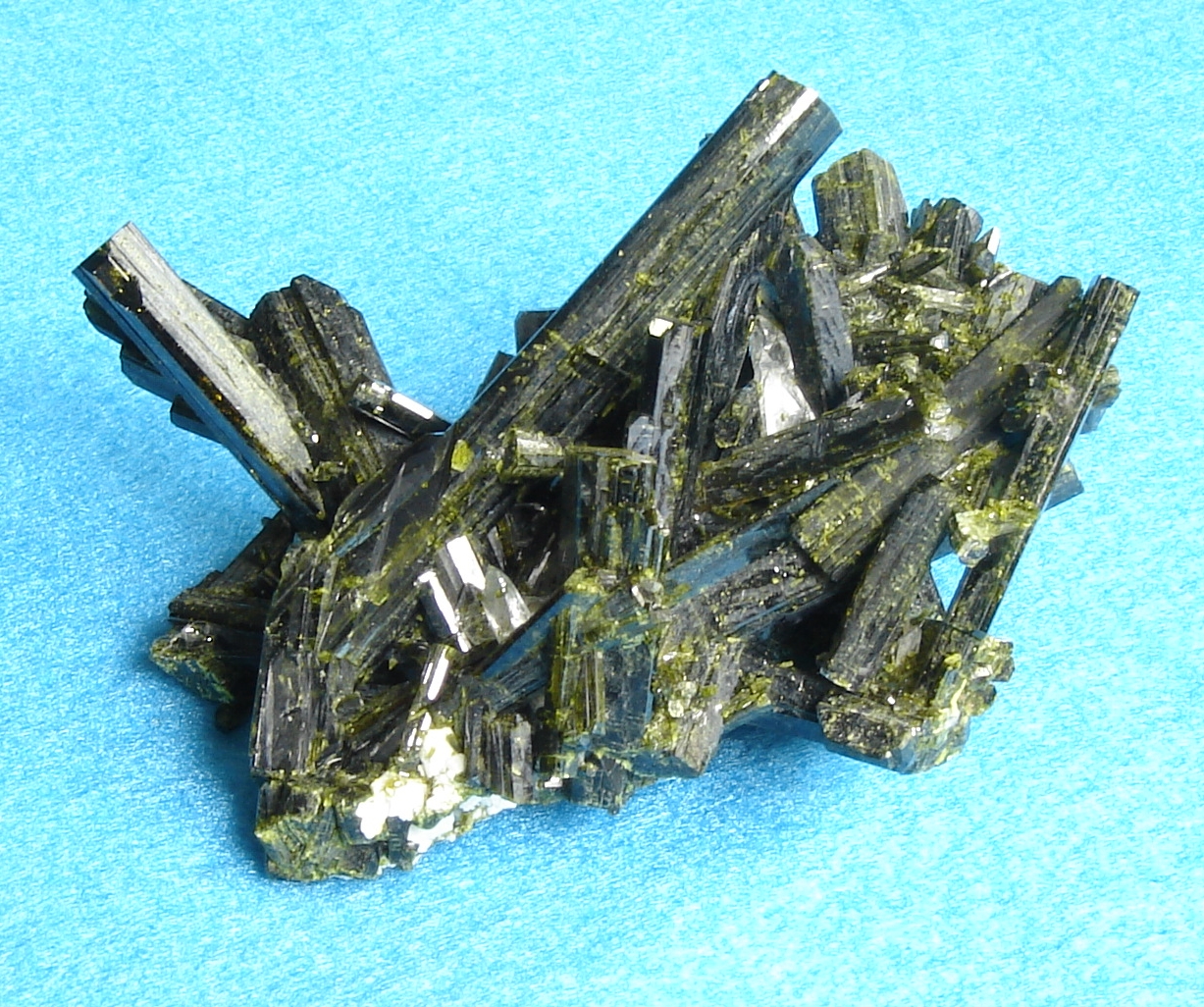 Epidote is a sorosilicate , Ca2Al2(Fe3+;Al)(SiO4)(Si2O7)O(OH), lizing in the system. Well-developed crystals are of frequent occurrence: they are commonly prismatic in habit, the direction of elongation being perpendicular to the single plane of symmetry. The faces are often deeply striated and crystals are often twinned. Many of the characters of the mineral vary with the amount of iron present for instance, the color, the optical constants, and the specific gravity. The color is green, grey, brown or nearly black, but usually a characteristic shade of yellowish-green or pistachio-green. It displays strong pleochroism, the pleochroic colors being usually green, yellow and brown. is white or pale rose-red variety containing very little iron, thus having the same chemical composition as the mineral .

Epidote is an abundant rock-forming mineral, but one of secondary origin. It occurs in and ose rocks of metamorphic origin. It is also a product of alteration of various minerals (s, s, s, s, s, and others) composing . A rock composed of and epidote is known as . Well-developed crystals are found at many localities: Knappenwand, near the in the Untersulzbachthal in Salzburg, as magnificent, dark green crystals of long prismatic habit in cavities in epidote schist, with , , , and ; the Ala valley and Traversella in Piedmont; Arendal in ; in ; Haddam in ; Prince of Wales Island in , here as large, dark green, tabular crystals with s in metamorphosed limestone.

The perfectly transparent, dark green crystals from the Knappenwand and from have occasionally been cut as gemstones.

Belonging to the same isomorphous group with epidote are the species and , which may be described as and epidotes respectively.

Piemontite occurs as small, reddish-black, monoclinic crystals in the manganese mines at San Marcel, near Ivrea in Piedmont, and in crystalline schists at several places in . The purple color of the ian porfido rosso antico is due to the presence of this mineral.

Allanite has the same general epidote formula and contains metals of the cerium group. In external appearance it differs widely from epidote, being black or dark brown in color, pitchy in lustre, and opaque in the mass; further, there is little or no cleavage, and well-developed crystals are rare. The crystallographic and optical characters are similar to those of epidote; the pleochroism is strong with reddish-, yellowish-, and greenish-brown colors. Although not a common mineral, allanite is of fairly wide distribution as a primary accessory constituent of many crystalline rocks, , , , , , and others. It was first found in the granite of east and described by Thomas Allan in 1808, after whom the species was named. Allanite is a mineral readily altered by hydration, becoming optically isotropic and : for this reason several varieties have been distinguished, and many different names applied. Orthite was the name given by in 1818 to a hydrated form found as slender prismatic crystals, sometimes a foot in length, at Finbo, near Falun in ..