The metamorphic facies are groups of mineral compositions in metamorphic rocks, that are typical for a certain field in pressure-temperature space. Rocks which contain certain minerals can therefore be linked to certain tectonic settings.

The name facies was first used for specific sedimentary environments in sedimentary rocks by Swiss geologist Amanz Gressly in 1838. Analogous with these sedimentary facies a number of metamorphic facies were proposed in 1921 by Finnish petrologist Pentti Eskola. Eskola's classification was refined in the 1970s by New-Zealand geologist Francis John Turner. 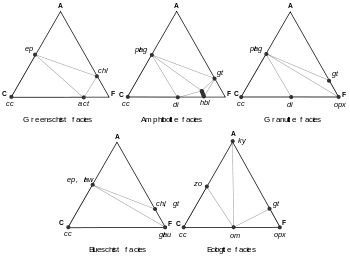 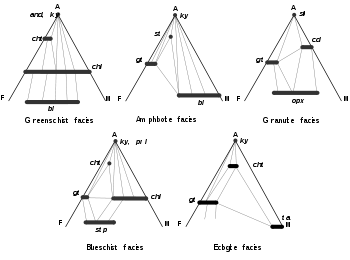 Triangular diagrams showing the aluminium (A), iron (F) and magnesium (M) content of the main phases (dark dots and, when the composition can vary, stripes). Thin grey lines represent equilibria between phases.

The different metamorphic facies are defined by the mineralogical composition of a rock. When the temperature or pressure in a rock body change, the rock can cross into a different facies and some minerals become stable while others become unstable or metastable. Whether minerals really react depends on the reaction kinetics, the activation energy of the reaction and how much fluid is present in the rock.

The minerals in a metamorphic rock and their age relations can be studied by optical microscopy or Scanning Electron Microscopy of thin sections of the rock. Apart from the metamorphic facies of a rock, a whole terrane can be described by the abbreviations LT, MT, HT, LP, MP, HP (from low, medium or high; pressure or temperature). Since the 1980s the term UHP (ultra high pressure) is used for rocks that saw extreme pressures.

Which minerals grow in a rock is also dependent of the original composition of the protolith (the original rock before metamorphosis). Carbonate rocks have a different composition from say a basalt lava, the minerals that can grow in them are different too. Therefore a metapsammite and a metapelite will have different mineralogical compositions even though they were in the same metamorphic facies.

Every metamorphic facies has some index minerals by which it can be recognized. That does not mean these minerals will necessarily be visible with the naked eye, or even exist in the rock; when the rock did not have the right chemical composition they will not grow.

Metamorphic facies and their mineral assemblages

The zeolite facies is the metamorphic facies with the lowest metamorphic grade. At lower temperature and pressure processes in the rock are called diagenesis. The facies is named for zeolites, strongly hydrated tectosilicates. It can have the following mineral assemblages:

In meta-igneous rocks and greywackes:

In meta-igneous rocks and greywackes:

The greenschist facies is at medium pressure and temperature. The facies is named for the typical schistose texture of the rocks and green colour of the minerals chlorite, epidote and actinolite. Characteristic mineral assemblages are:

The amphibolite facies is a facies of medium pressure and average to high temperature. It is named after amphiboles that form under such circumstances. It has the following mineral assemblages:

The albite-epidote-hornfels facies is a facies at low pressure and relatively low temperatures. It is named for the two minerals albite and epidote, though they are stable in more facies. Hornfels is a rock formed in contact metamorphism, a process that characteristically involves high temperatures but low pressures/depths. This facies is characterized by the following minerals:

The sanidinite facies is a rare facies of extremely high temperatures and low pressure. It can only be reached under certain contact-metamorphic circumstances. Due to the high temperature the rock experiences partial melting and glass is formed. This facies is named for the mineral sanidine. It is characterized by the following mineral assemblages: