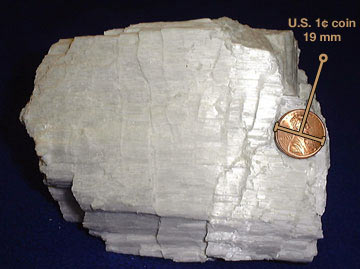 Wollastonite is a inosilicate (CaSiO3) that may contain small amounts of , , and substituting for calcium. It is usually white. It forms when impure or is subjected to high temperature and pressure sometimes in the presence of silica-bearing fluids as in s or contact . Associated minerals include s, , , , , plagioclase , Pyroxene and . It is named after the English chemist and mineralogist (1766-1828).

Some of the properties that make wollastonite so useful are its high brightness and whiteness, low moisture and oil absorption, and low volatile content. Wollastonite is used primarily in ceramics, friction products (brakes and clutches), metalmaking, paint filler, and plastics.

Despite its chemical similarity to the compositional spectrum of the group of minerals - where and substitution for ends with and respectively - it is structurally very different, with a third SiO4 tetrahedron [Deer, Howie & Zussman (1966) "An Introduction to the Rock Forming Minerals", Longman 528pp + xii, ISBN 0-582-44210-9] in the linked chain (as opposed to two in the pyroxenes).

In 2005, China was the top producer of wollastonite with at least 50% world share followed by India and the USA, reports the .

In the United States, wollastonite is mined in and . Deposits have also been mined commercially in North Western .

Wollastonite has industrial importance worldwide. It is used in many industries, mostly by tile factories which have incorporated it into the manufacturing of ceramic to improve many aspects, and this is due to its fluxing properties, freedom from volatile constituents, whiteness, and acicular particle shape.

Wollastonite usually occurs as a common constituent of a thermally metamorphosed impure limestone, it also could occur when the silicon is due to metamorphism in contact altered calcareous sediments, or to contamination in the invading igneous rock. In most of these occurrences it is the result of the reaction: CaCO3+SiO2=>CaSiO3+CO2.

Wollastonite occurs as bladed crystal masses, single crystals can show an acicular particle shape and usually it exhibits a white color, but sometimes cream, grey or very pale green. The streak of wollastonite is white, and its hardness on mohs' scale ranges between 4.5-5. Its specific gravity ranges between 2.87-3.09. There are more than one cleavage planes for it, there is a perfect cleavage on {100}, good cleavages on {001}, and {¯102}, and an imperfect cleavage on {101}. It is common for wollastonite to have a twin axis [010] , a composition plane (100), and rarely to have a twin axis [001] . The luster is usually vitreous to pearly. The melting point of wollastonite is about 1,540˚C.