The Delaware Valley is a term used to refer to the valley where the Delaware River flows, along with the surrounding communities. This includes the metropolitan area centered on the city of Philadelphia. Such educational institutions as Delaware Valley Regional High School in Alexandria Township and Delaware Valley College in Doylestown Township are such examples of regional naming. Likewise, Frenchtown's now defunct newspaper The Delaware Valley News is another example of the usage.

The Delaware Valley is composed of several counties in Eastern Pennsylvania and Western New Jersey, one county in northern Delaware and one county in northeastern Maryland. The area has a population of over 6.1 million (as of the 2010 Census Bureau count). Philadelphia, being the region's major commercial, cultural, and industrial center, maintains a rather large sphere of influence that affects the counties that immediately surround it. The majority of the region's populace resides in Pennsylvania and New Jersey.

As of March 2011, the Philadelphia–Camden–Wilmington, PA-NJ-DE-MD Metropolitan Statistical Area is the sixth-largest metropolitan area in the United States[2][3][4] and is located towards the southern end of the Northeast megalopolis extending from Boston to Washington, D.C.

Based on commuter flows, the OMB also defines a wider labor market region that adds Berks County to the Philadelphia–Camden–Wilmington CSA bringing the total metropolitan population to 6.53 million.

Counties making up the Delaware Valley 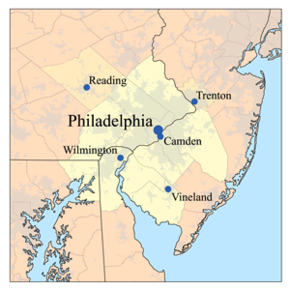 Map of the Delaware Valley region

Mercer County, New Jersey, while part of the New York Metropolitan Area, has traditionally also been affiliated with the Delaware Valley. Mercer County, a relatively wealthy[peacock term] county located on the northern fringe of the Delaware Valley MSA, is home to both New York and Philadelphia commuters. In recent years,[when?] however, growing numbers of New York commuters have migrated into Mercer. The two main towns in Mercer County are Princeton, located in the northern part of the county, and Trenton, located in the southern part of the county. Trenton, New Jersey's capital, tends to identify more with Philadelphia, and many commuters travel to Philadelphia from Trenton due to the shorter time involved than a trip to New York. Train and highway trips to Philadelphia are generally less than an hour from downtown Trenton, while trips to midtown Manhattan generally take over an hour by either highway or rail. Princeton identifies with New York because it is home to many New York commuters who began migrating into the area after World War II.[6] Furthermore, the commute time from Princeton to New York by train is different than the commute time from Princeton to Philadelphia. Mercer County is also its own metropolitan region, called the Trenton-Ewing MSA.[7]

King of Prussia, Pennsylvania's and Cherry Hill, New Jersey's are two of the largest suburban shopping malls, each having at least 5,000,000 square feet (460,000 m2) of office space, and at least 600,000 square feet (56,000 m2) of retail. Philadelphia's suburbs contain a high concentration of malls, including the King of Prussia Mall, the largest on the East Coast, and the Cherry Hill Mall in Cherry Hill Township, New Jersey, the first enclosed mall on the East Coast. Malls, office complexes, strip shopping plazas, expressways, and tract housing are common sights, and more and more continue to replace rolling countryside, farms, woods, and wetlands. However, due to strong opposition by residents and political officials, many acres of land have been preserved throughout the Delaware Valley. Sprawling forests and farms can still be found throughout the region, providing a haven for pristine nature seekers. Older small towns and large boroughs such as Norristown, Jenkintown, Upper Darby and West Chester retain distinct community identities while engulfed in suburbia. The fastest-growing counties are Chester, Montgomery, Bucks, and Gloucester. Upper Darby, in Delaware County is the largest township in the United States. Sometimes Reading is included in the Delaware Valley Metro Area.[citation needed]

The region also has a large and growing ethnic population, thanks to job growth and proximity to major cities other than Philadelphia, such as New York City (90 miles or a 1.5 hour trip away) and Washington D.C (140 miles and about a 2.5 hour trip away).

Sticker by the Delaware Valley's Lenape Indians in 2008 claiming West Philadelphia is their home.

The Delaware Valley is home to extensive populations of African Americans (over 40% of Philadelphia's residents are black), Europeans (the majority of residents are white European of German, Irish, Italian and Polish descent), Asians such as Chinese, Indian, Korean and Vietnamese, Arabs and Turks, Indians and Pakistanis, Israelis (while American Jews form a significant ethno-religious community), Hispanics largest group are Puerto Ricans. Other large groups include Mexicans, Salvadorans, and Dominicans.[8] There is a West Indian community and even a small Native American community known as Lenapehoking for Lenni-Lenape Indians of West Philadelphia. Along with their immigrant counterparts, the area sees revived internal migration. Once sending more people out then receiving, the Delaware Valley has now turned that around. This is most notable of the city of Philadelphia, which has been struggling with population decline since the 1950s. The city is projected to begin increasing in population shortly before or after the year 2010. The core suburban counties have never had a difficult time achieving this, with most gaining the bulk of their populations in the last few decades.

The valley was the territory of the Susquehannock and Lenape, who are recalled in place names throughout the region. The region became part of the Dutch colony of New Netherland after the exploration of Delaware Bay in 1609. The Dutch called the Delaware River the Zuyd Rivier, or South River, and considered the lands along it banks and those of its bay to be the southern flank of its province of New Netherland. In 1638, it began to be settled by Swedes, Finns, Dutch, and Walloons and became the colony of New Sweden, though this was not officially recognized by the Dutch Empire who re-asserted control in 1655. The area was taken by the English in 1664.[9] The name Delaware comes from Thomas West, 3rd Baron De La Warr, who had arrived at Jamestown, Virginia in 1610, just as original settlers were about to abandon it, and thus maintaining the English foothold on the North American continent.

Many residents commute to jobs in Philadelphia, Camden, Wilmington with the help of expressways and trains. Commutes from one suburb to another are also common, as office parks have sprung up in new commercial centers such as King of Prussia, Fort Washington, Cherry Hill, and Plymouth Meeting. 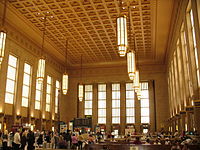 WPVI-TV uses the slogan, "The Delaware Valley's leading news program" for their Action News broadcast, since that program has led the ratings for news programs in the Philadelphia market for over 30 years.

The neighboring Lehigh Valley is considered to be an outlying area of the Greater Delaware Valley region, as it is part of the same media market. If included, it would increase the size of the Delaware Valley by approximately 821,623 people.[11]