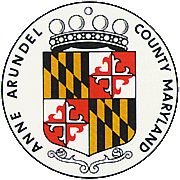 Anne Arundel County forms part of the . The of Maryland is located on the county line between Anne Arundel County and Howard County, in the of Jessup. [Cite web |url=http://www.census.gov/geo/www/cenpop/statecenters.txt |title=Population and Population Centers by State: 2000 |publisher=United States Census Bureau ]

The County was named for , the daughter of , members of the ancient family of Arundells in . She married in 1627 or 1628.Anne Arundel County was an original county in Maryland, created in 1650, the year after Anne Arundell's death. The Howard District was originally part of the original Anne Arundel County. In 1851, it was broken off and made into , the 21st of 23 Maryland counties.

Anne Arundel County's climate differs on an east-to-west axis. The eastern half of the county has a , with hot humid summers and cool, moist winters. The western half of the county lies in the transition zone between the zone and the zone, with slightly colder winter temperatures and higher snowfall totals. Annual rainfall averages hover around 40 inches per year throughout the county.

Anne Arundel county is the home of , commonly referred to as BWI. BWI serves as the main airport for greater Baltimore. It is also an increasingly popular alternative airport to residents of the , area. BWI is an East Coast hub for , meaning that direct flights are available between BWI and much of the country.

The county also has multiple stops on the MARC service, including a stop at station, located near BWI Airport. trains also stop at BWI's train station.

Interstate 595 also runs through central Anne Arundel County. This highway, however, is not signed. It is referred to by its more common names, US 50 and .

The crosses the from the county; it connects the western shore with the Eastern Shore in Queen Anne's County.

Unincorporated areas are also considered as towns by many people and listed in many collections of towns, but they lack local government. Various organizations, such as the , the , and local chambers of commerce, define the communities they wish to recognize differently, and since they are not incorporated, their boundaries have no official status outside the organizations in question. The Census Bureau recognizes the following s in the county:

Other unincorporated places not listed as Census-Designated Places but known in the area include:

* The newspapers of record are "" and the "" (now owned by "The Capital"), which was founded in 1727. [cite web |url=http://www.mdarchives.state.md.us/megafile/msa/speccol/sc2900/sc2908/html/mdgazette.html |publisher=Maryland State Archives |title=Maryland Gazette Collection ]

*Pupils in the county are zoned to .
*Postsecondary education is offered by at several locations throughout the county.
*Anne Arundel County is also home to the and , both in Annapolis.