The cuisine of Philadelphia was shaped largely by the city's mixture of ethnicities, available foodstuffs and history. Certain foods have become iconic to the city. Invented in Philadelphia in the 1930s, the cheesesteak is the most well known icon of the city, and soft pretzels have become a part of Philadelphia culture. During the 18th century city taverns were major meeting places for politicians and businessmen, while the 19th century saw the creation of two Philadelphia landmarks, the Reading Terminal Market and Italian Market. After a dismal restaurant scene during the post-war era of the 20th century, the 1970s brought a restaurant renaissance that has continued into the 21st century.

Philadelphia's large immigrant population has contributed to a large mixture of tastes to mingle and develop. Many types of foods have been created in or near Philadelphia or have strong associations with the city. In the 1900's Philadelphia's most iconic foods were established as the cheesesteak, Hoagie, soft pretzel, Water Ice and Soda pop.

The cheesesteak is a sandwich traditionally made with sliced beef and melted cheese on an Italian roll. In the 1930s, the phenomenon as a steak sandwich began when hot dog vendor brothers Pat Olivieri and Harry Olivieri put grilled beef on a hot dog bun and gave it to a taxi driver.[dubious – discuss] Later, after Pat and Harry had started selling the sandwich on Italian rolls, the cheesesteak was affixed in the local culture when one of their cooks put melted cheese on the sandwich. Originally, the cheese was melted in a separate container to accommodate their large clientele who followed kosher rules (thereby not mixing dairy and meat). Today, cheese choices in Philadelphia eateries are virtually limited to American, Provolone, or Cheese Whiz. The latter is especially popular in those places that prominently carry it. 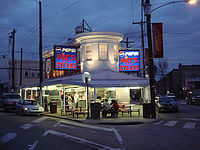 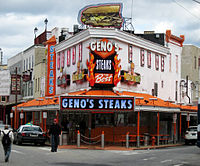 The hoagie is another sandwich that is said to have been invented in Philadelphia, undoubtedly of origin in Italian-American cuisine. It has been asserted that Italians working at the World War I era shipyard in Philadelphia, known as Hog Island where emergency shipping was produced for the war effort, introduced the sandwich, by putting various sliced meats, cheeses, and lettuce between two slices of Italian bread. This became known as the "Hog Island" sandwich; hence, the "hoagie".[1] Declared the official sandwich of Philadelphia in 1992, the hoagie is a sandwich made of meat and cheese with lettuce, tomatoes, and onions on an Italian roll.[2] Another Italian roll sandwich is the roast pork Italian. The sandwich consists of sliced roast pork with broccoli rabe or spinach and provolone cheese.[3] Philadelphia Pepper Pot, a soup of tripe, meat, vegetables, is claimed to have been created during the American Revolutionary War and named after the home city of its creator.[4] Snapper Soup, a thick brown turtle soup served with sherry, is a Philadelphia delicacy, generally found in area bars and seafood restaurants. In many places, it is served with oyster crackers (such as OTC Crackers, OTC being an abbreviation for "Original Trenton Cracker") and horseradish.

Although Soda pop is not purely associated with Philadelphia, it was invented in Philadelphia, with brands that rose to popularity as Hires Root Beer, Franks Beverages' unique Black Cherry Wishniak or Vanilla Cream, and Levi's Camp Cherry.

In early Philadelphia history the city's eating scene was dominated by taverns. By 1752, Philadelphia had 120 licensed taverns and numerous illegal taverns. The taverns ranged for all types of people and class from illegal grog shops on the waterfront that sailors frequented to the upper class taverns that members of city government enjoyed. Taverns such as the London Coffee House, the Blue Anchor, Tun Tavern and John Biddle's Indian King were regular meeting places for the political and business leaders of the city.

Popular restaurants during the early 19th century included the United States Hotel and Parkinson's on Chestnut Street and Joseph Head Mansion's House on Spruce Street. One of the most significant restaurateurs and caterers at this time was M. Latouche, an expert in French cuisine, whose restaurant offered expensive food and choice wine. Toward the end of the 19th century, the large number of Italian immigrants in South Philadelphia led to the creation of the Italian Market. The market, which runs along part of south 9th Street, includes numerous types of food vendors along with other shops, although today it is mostly made up of non-Italian merchants.[6] Another market, the Reading Terminal Market, opened in 1892. Created to replace the markets displaced by the construction of the Reading Terminal on Market Street in Center City, Reading Terminal Market has over 80 merchants and is a popular tourist attraction. In 1902, Joseph Horn and Frank Hardart opened the first automat in the U.S. at 818 Chestnut Street, now a retail store. The original Automat is now part of the Smithsonian Institution.[7]

In the 1950s and 1960s, the restaurant scene was in decline. The city saw a large emigration into the suburbs, and fine dining could be found mainly in private clubs and dinner parties. But as the city started to rebound in the 1970s, Philadelphia saw a restaurant renaissance. For instance, in 1970 Georges Perrier and Peter Von Starck founded French restaurant Le Panetiere. After a year, the two split, with Von Starck taking the Panetiere name to a different location. Perrier opened Le Bec-Fin at 13th & Spruce Street, then later at 1523 Walnut Street, which quickly became one of Philadelphia's most renowned restaurants. The years following saw many new fine dining places open, including Four Seasons' Fountain Restaurant in 1983.[5] Along with the up-scale restaurants, numerous ethnic and fast-food restaurants opened throughout the city. The 1970s also saw the rise of street vendors. The vendors, building off the well established tradition of chestnut and pretzel vendors, began selling numerous foods, especially hot dogs, cheesesteaks, and breakfast sandwiches. By taking up sidewalk space and possibly business, the vendors annoyed established stores which eventually led to numerous legal battles over ordinances which placed restrictions on vendors. The issue was surrounded by race and class overtones, but vendors have since become commonplace and even nationally renowned for serving quality food.[6][8]

In September 2006, a smoking ban went into effect for Philadelphia bars and restaurants. The ban, which exempts private clubs, hotels, specialty smoking shops, and waiver-eligible bars that serve little food, had a troubled start and went unenforced until January 2007.[11] Just a month later Philadelphia City Council passed a ban on trans fat in restaurants, effective September 2, 2007.[12][13]

Other foods with Philadelphia historical roots