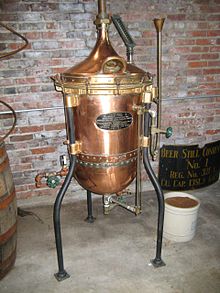 A display of spirits in a supermarket.

A distilled beverage, liquor, or spirit is an alcoholic beverage containing ethanol that is produced by distilling (i.e., concentrating by distillation) ethanol produced by means of fermenting grain, fruit, or vegetables.[1] This excludes undistilled fermented beverages such as beer, wine, and hard cider.

The term hard liquor is used in North America to distinguish distilled beverages from undistilled ones (implicitly weaker).

The term spirit refers to a distilled beverage that contains no added sugar and has at least 20% alcohol by volume (ABV). Popular spirits include brandy, fruit brandy (also known as eau-de-vie or schnapps), gin, rum, tequila, vodka, and whisky.

Distilled beverages that are bottled with added sugar and added flavorings, such as Grand Marnier, Frangelico, and American schnapps, are liqueurs. In common usage, the distinction between spirits and liqueurs is widely unknown or ignored; consequently all alcoholic beverages other than beer and wine are generally referred to as spirits.

Beer and wine, which are not distilled beverages, are limited to a maximum alcohol content of about 20% ABV, as most yeasts cannot reproduce when the concentration of alcohol is above this level; consequently, fermentation ceases at that point. 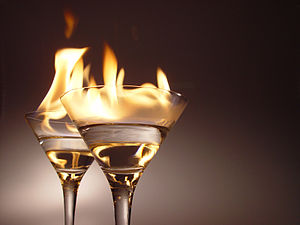 The flash points of alcohol concentrations from 10% ABV to 96% ABV are shown below:[5]

Beverages that have a low concentration of alcohol will burn if sufficiently heated and an ignition source (such as an electric spark or a match) is applied to them. For example, the flash point of ordinary wine containing 12.5% alcohol is about 125 °F (52 °C).[3][6]

The origin of "liquor" and its close relative "liquid" was the Latin verb liquere, meaning "to be fluid." According to the Oxford English Dictionary, an early use of the word in the English language, meaning simply "a liquid," can be dated to 1225. The first use that the OED mentions of its meaning "a liquid for drinking" occurred in the 14th century. Its use as a term for “an intoxicating alcoholic drink” appeared in the 16th century.

The term "spirit" in reference to alcohol stems from Middle Eastern alchemy. These alchemists were more concerned with medical elixirs than with transmuting lead into gold. The vapor given off and collected during an alchemical process (as with distillation of alcohol) was called a spirit of the original material. 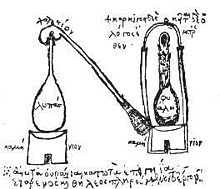 Freeze distillation, the "Mongolian still," is known to have been in use in Central Asia sometime in the early Middle Ages.[citation needed] This technique involves freezing the alcoholic beverage and then removing the ice. The freezing technique had limitations in geography and implementation and consequently was not widely used.

A notable drawback of this technique is that it concentrates toxins such as methanol and fusel alcohols, rather than reducing their concentration.[citation needed]

Although the Greeks and Arabs knew the art of distillation, the earliest written evidence for the distillation of alcohol comes from the School of Salerno in the 12th century.[12] The production method was written in code, suggesting that it was being kept secret. Fractional distillation was developed by Tadeo Alderotti in the 13th century.[13]

In 1437, burned water (brandy) was mentioned in the records of the County of Katzenelnbogen in Germany.[14] It was served in a tall, narrow glass called a “goderulffe.”

Paracelsus gave alcohol its modern name, taking it from an Arabic word that means "finely divided," in reference to what is done to wine. His test was to burn a spoonful without leaving any residue. Other ways of testing were to burn a cloth soaked in it without actually harming the cloth. In both cases, to achieve this effect the alcohol had to have been at least 95 percent, close to the maximum concentration attainable through distillation (see purification of ethanol).

Claims upon the origin of specific beverages are controversial, often invoking national pride, but they are plausible after the 12th century AD when Irish whiskey and German brandy became available. These spirits would have had a much lower alcohol content (about 40% ABV) than the alchemists' pure distillations, and they were likely first thought of as medicinal elixirs. Consumption of distilled beverages rose dramatically in Europe in and after the mid 14th century, when distilled liquors were commonly used as remedies for the Black Death. Around 1400 it was discovered how to distill spirits from wheat, barley, and rye beers, a cheaper option than grapes. Thus began the "national" drinks of Europe: jenever (Belgium and the Netherlands), gin (England), schnapps (Germany), grappa (Italy), horilka (Ukraine), akvavit/snaps (Scandinavia), vodka (Russia and Poland), rakia (the Balkans), poitín (Ireland). The actual names only emerged in the 16th century but the drinks were well known prior to that date. 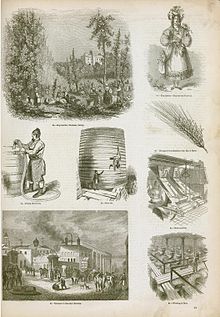 An illustration of brewing and distilling industry methods in England, 1858.

Except for the invention of the continuous still in the 19th century, the basic process of distillation has not changed since the 8th century. In fact, many still prefer traditional methods of distillation to their modern counterparts. For example, traditional French alembic copper pot distillation systems can be found across Europe and North America today.[15] Other novel methods such as freeze distillation have had limited use. There have been many changes in the methods used to prepare organic material for the still, and the ways the distilled beverage is finished and marketed. Knowledge of the principles of sanitation and access to standardised yeast strains have improved the quality of the base ingredient; larger, more efficient stills produce more product per square foot and reduce waste; ingredients such as corn, rice, and potatoes have been called into service as inexpensive replacements for traditional grains and fruit. For tequila, the blue agave plant is used. Chemists have discovered the scientific principles behind aging, and have devised ways to accelerate aging without introducing harsh flavors. Modern filters have allowed distillers to remove unwanted residue and produce smoother finished products. Most of all, marketing has developed a worldwide market for distilled beverages among populations that previously did not drink spirits.

Microdistilling is a trend that began to develop in the United States following the emergence and immense popularity of microbrewing and craft beer in the last decades of the 20th century. It is different from megadistilling in the quantity and quality of output.

In some jurisdictions in the United States, including those that allow unlicensed individuals to make their own beer and wine, it is illegal to distill beverage alcohol without an appropriate license. In those jurisdictions, selling a still also requires an appropriate licence. It is legal to distill beverage alcohol as a hobby for personal use in some countries including, but not limited to, Italy, Canada, New Zealand and to a limited degree the UK. In those jurisdictions where it is illegal to distill beverage alcohol some people circumvent those laws by pretending to distill alcohol for fuel but consuming the product.[citation needed] It is important not to confuse ethanol, which is a type of alcohol used for both beverages and fuel, with methanol, which is a different alcohol fuel that is poisonous. Methanol is also produced as a byproduct of beverage distillation, but only in small amounts which are ordinarily separated out during the beverage production process. Methanol will cause blindness or death if consumed in large amounts.