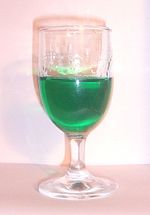 Crème de menthe is a sweet, mint-flavored alcoholic beverage. Its flavor is primarily derived from Corsican mint. It is available commercially in a colorless (called "white") and a green version (which obtains its color from the mint leaves or from the addition of coloring, if extract and not the leaves are used to make the liqueur). Both varieties have similar flavors and are interchangeable in recipes, except where the color is important.

Crème de menthe is used as an ingredient in several cocktails, such as the Grasshopper and the Stinger, and is also served as an after-dinner drink and can be used in food recipes as a flavoring (see Mint chocolate).

A simple recipe is to mix the crème de menthe with ice cream which creates a mint like shake. Toppings are also sometimes used including nuts, or pecans.

It is also used in a popular drink in Australia called Minted Peas, which is a mix of crème de menthe and coke.