Black Books is a British sitcom television series created by Dylan Moran and Graham Linehan and produced by Nira Park, first broadcast on Channel 4 from 2000 to 2004. Starring Moran, Bill Bailey and Tamsin Greig, it is set in the eponymous London bookshop Black Books and follows the lives of its hostile and belligerent owner Bernard Black (Moran), his enthusiastic assistant Manny Bianco (Bailey), and their neurotic friend Fran Katzenjammer (Greig).

Bernard Black is the proprietor of his small bookshop, Black Books. The series revolves around the lives of Bernard, Manny, and Fran. A central theme is Bernard's odd position as a belligerent and openly hostile shopkeeper who has a loathing of the outside world and all the people who inhabit it, except his oldest friend, Fran, who initially runs a trendy bric-a-brac shop, Nifty Gifty, next-door to the shop.

Bernard displays little enthusiasm or interest in retail (or, indeed, anything outside drinking, smoking, and reading) and actively avoids having to interact with anyone, even inside his shop, as he has a personal dislike of his customers, treating his bookshop more like a personal library. It is suggested that Fran and Bernard once slept together, but now they remain happy to be friends, sharing a love of smoking heavily and drinking to excess. Fran otherwise has a rather hopeless love life.

Manny is introduced in the first episode as a stressed-out accountant who enters the bookshop seeking The Little Book of Calm. During a drunken night out, Bernard offers him a job as a shop assistant and a room above the shop if he will do Bernard's tax return for him. Sobering up, Bernard realises Manny's optimistic nature is not suited to "this kind of operation" (i.e., Black Books). Fran, however, seeing that Manny is good for Bernard, forces Bernard to let him stay.

Many episodes are driven by Manny and Fran's attempts to force Bernard into a more socially acceptable lifestyle. Their efforts usually result in chaos, sucking them back into Bernard's nihilistic view of the world. The bookshop, which also doubles as Manny and Bernard's residence, is frequently depicted as being in an unhealthy state of dirtiness and often inhabited by animals and other unidentified creatures, while disorder is a frequent aspect of the running of the shop. Manny's attempts to improve both the shop and the residence often fail. 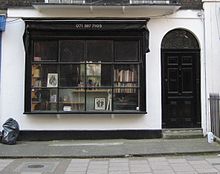 Collinge & Clark bookshop, used for exterior shots in the series

A pilot for the show was featured in the 1998 Channel 4 sitcom festival in Riverside Studios.[1] This early version was decidedly darker, revolving around Bernard's, and later Manny's, decision to commit suicide. It featured Manny (surname Zimmerman in reference to Bob Dylan) as a professional depression-o-gram[clarification needed], and the Fran character as Valerie, a philosophy lecturer.

The pilot was an original creation of Moran's and the series was his first creation as a writer for a television series. Linehan, co-writer of the 1995 Channel 4 sitcom Father Ted, joined at the outset to co-write the series with Moran at the suggestion of producer William Burdett-Coutts after Linehan saw the pilot and had seen Moran performing in Dublin. The characters were Moran's original creation, created over a month-long process he calls "spitballing", i.e. talking spontaneously to each other in character.[1]

The concept of Bernard owning a bookshop came about because of Moran's view of bookshops as doomed enterprises. Moran said "Running a second-hand bookshop is a guaranteed commercial failure. It's a whole philosophy. There were bookshops that I frequented and I was always struck by the loneliness and doggedness of these men who piloted this death ship", while Linehan said his belligerent personality reflected a sign he once saw in a bookshop stating "Please put the books anywhere you like because we've got nothing better to do than put them back". Moran said of the series, "We just wanted to cram as much elaborate stupidity into a half-hour that could make it be coherent and that you would believe".[1]

The fictional address for the bookshop is Black Books, 13 Little Bevan Street, Bloomsbury, London WC1.[2] Manny also states the shop is located "just off Russell Square".[3] The exterior scenes of the bookshop were filmed outside a real bookshop, albeit a smaller one, called Collinge & Clark, located in Leigh Street, Bloomsbury.

The audio commentary for Shaun of the Dead states that Black Books is considered by the producers to be a sister show of the 1999 Channel 4 sitcom Spaced, also produced by Nira Park. The show features several actors from Spaced, while in one episode Manny is heard speaking to Twist Morgan, a character from Spaced.[3] Simon Pegg guest-starred as Bill Bailey's boss in one episode, an inversion of their roles in Spaced; Nick Frost appeared at the beginning of the episode "The Big Lockout" to install a new security system for the shop, though lost Manny's attention when he spotted a Subbuteo player in his hair; Jessica Stevenson made an appearance as a friend of Fran's, who was trying to help her live a healthier lifestyle with attempts to change her diet and get her to exercise more; while Peter Serafinowicz played a radio broadcaster whose dulcet tones reading the shipping forecast drive Fran wild with desire.

Black Books won the BAFTA for Best Situation Comedy in 2001 and 2005, and won a Bronze Rose at the Festival Rose d'Or of Montreux in 2001.

According to Allan Brown, writing for The Times in August 2005, the show was "killed off after three hugely popular series".[4]