Brandy
This article is about the spirit. For other uses, see Brandy (disambiguation). 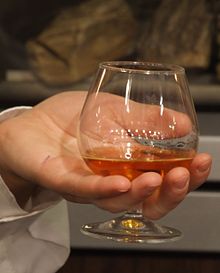 Brandy (from brandywine, derived from Dutch brandewijn—"burnt wine")[1] is a spirit produced by distilling wine. Brandy generally contains 35%–60% alcohol by volume and is typically taken as an after-dinner drink. Some brandies are aged in wooden casks, while some are simply coloured with caramel colouring to imitate the effect of such aging (and some brandies are produced using a combination of both aging and colouring).

Brandy is also produced from fermented fruits other than grapes, but these products are typically called eaux-de-vie.

In some countries, fruit flavouring or some other flavouring may be added to a spirit that is called "brandy".

Brandy may be served neat or on the rocks. It is added to other beverages to make several popular cocktails; these include the Brandy Alexander, the Sidecar, the Brandy Sour, and the Brandy Old Fashioned.

Brandy is traditionally drunk neat at room temperature in western countries from a snifter or a tulip glass.[2] In parts of Asia, it is usually drunk on the rocks. When drunk at room temperature, it is often slightly warmed by holding the glass cupped in the palm or by gently heating it. However, excessive heating of brandy may cause the alcohol vapour to become too strong, to the extent that its aroma can become overpowering. Brandy connoisseurs will ask for the glass to be warmed before the Brandy is added, this causes the aroma to be strong without having to hold the glass, and the flavour to be maximised.

Brandy has a more pleasant aroma at a lower temperature, e.g., 16 °C (61 °F). In most homes, this would imply that brandy should be cooled rather than heated for maximum enjoyment. Furthermore, alcohol (which makes up 40% of a typical brandy) becomes thin when it is heated (and more viscous when cooled). Thus, cool brandy produces a fuller and smoother mouthfeel and less of a "burning" sensation.[3]

Brandy was an important ingredient in many patent medicines such as Daffy's Elixir.

The origins of brandy are clearly tied to the development of distillation. Concentrated alcoholic beverages were known in ancient Greece and Rome. Brandy, as it is known today, first began to appear in the 12th century and became generally popular in the 14th century.

Initially wine was distilled as a preservation method and as a way to make the wine easier for merchants to transport. It was also thought that wine was originally distilled to lessen the tax which was assessed by volume. The intent was to add the water removed by distillation back to the brandy shortly before consumption. It was discovered that after having been stored in wooden casks, the resulting product had improved over the original distilled spirit.[4] In addition to removing water, the distillation process leads to the formation and decomposition of numerous aroma compounds, fundamentally altering the composition of the distillate from its source. Non-volatile substances such as pigments, sugars, and salts remain behind in the still. As a result, the taste of the distillate may be quite unlike that of the original source.

As described in the 1728 edition of Cyclopaedia, the following method was used to distil brandy:[5]

A cucurbit was filled half full of the liquor from which brandy was to be drawn and then raised with a little fire until about one sixth part was distilled, or until that which falls into the receiver was entirely flammable. This liquor, distilled only once, was called spirit of wine or brandy. Purified by another distillation (or several more), this was then called spirit of wine rectified. The second distillation was made in balneo mariae and in a glass cucurbit, and the liquor was distilled to about one half the quantity. This was further rectified—as long as the operator thought necessary—to produce brandy.

To shorten these several distillations, which were long and troublesome, a chemical instrument was invented that reduced them to a single distillation. To test the purity of the rectified spirit of wine, a portion was ignited. If the entire contents were consumed without leaving any impurity behind, then the liquor was good. Another, better test involved putting a little gunpowder in the bottom of the spirit. If the gunpowder took fire when the spirit was consumed, then the liquor was good.[5]

As most brandies are distilled from grapes, the regions of the world producing excellent brandies have roughly paralleled those areas producing grapes for viniculture. At the end of the 19th century, the western European market—and by extension their overseas empires—was dominated by French and Spanish brandies, and eastern Europe was dominated by brandies from the Black Sea region, including Bulgaria, the Crimea, and Georgia. In 1880, David Saradjishvili founded his Cognac Factory in Tbilisi, Georgia (then part of the Russian Empire) which was a crossroads for Turkish, Central Asian, and Persian trade routes. Armenian and Georgian brandies (always called cognacs in the era) were considered some of the best in the world, often beating their French competitors at the International Expositions in Paris and Brussels in the early 1900s. The storehouses of the Romanov Court in St. Petersburg were regarded as the largest collections of cognacs and wines in the world—much of it from the Transcaucasus region of Georgia. During the October Revolution of 1917, upon the storming of the Winter Palace, the Bolshevik Revolution actually paused for a week or so as the rioters engorged on the substantial stores of cognac and wines. The Russian market was always a huge brandy-consuming region, and while much of it was home-grown, much was imported. The patterns of bottles follow that of western European norm. Throughout the Soviet era, the production of brandy remained a source of pride for the communist regime, and they continued to produce some excellent varieties—most famously the Jubilee Brandies of 1967, 1977, and 1987. Remaining bottles of these productions are highly sought after, not simply for their quality, but for their historical significance.

According to the Encyclopaedia Britannica and general colloquial usage of the term, brandy may also be made from pomace and from fermented fruit other than grapes.[4]

If a beverage comes from a particular fruit (or multiple fruits) other than exclusively grapes, or from the must of such fruit, it may be referred to as a "fruit brandy" or "fruit spirit" or using the name of a fruit, such as "peach brandy", rather than just generically as "brandy". If pomace is the raw material, the beverage may be called "pomace brandy", "marc brandy", "grape marc", "fruit marc spirit", or "grape marc spirit". Grape pomace brandy may be designated as "grappa" or "grappa brandy".[6] Apple brandy may be referred to as "applejack".[6] There is also a product called "grain brandy" that is made from grain spirits.[7]

Within particular jurisdictions, there are specific regulatory requirements regarding the labelling of products identified as brandy. For example:

The German term Weinbrand is equivalent to the English term "brandy", but outside the German-speaking countries it is used only for brandy from Austria and Germany.

In Poland, brandy is sometimes called winiak, from wino (wine).

There are three main types of brandy. The term "brandy" denotes grape brandy if the type is not otherwise specified.

Grape brandy is produced by the distillation of fermented grapes. 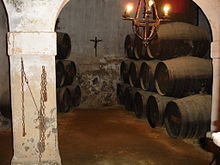 The European Union and some other countries legally enforce the use of the name Cognac as the exclusive name for brandy produced and distilled in the Cognac area of France and the name Armagnac for brandy from the Gascony area of France, made using traditional techniques. Since these are considered PDO, they refer not just to styles of brandy but brandies from a specific region, i.e. a brandy made in California in a manner identical to the method used to make Cognac and which tastes similar to Cognac, cannot be called Cognac in places that restrict the use of that term to products made in the Cognac region of France (such places include Europe, the United States and Canada).

A bottle of Calvados, a French fruit brandy made from apples

Fruit brandies are distilled from fruits other than grapes. Apples, peaches, apricots, plums, cherries, elderberries, raspberries, and blackberries, are the most commonly used fruits. Fruit brandy usually contains 40% to 45% ABV. It is usually colourless and is customarily drunk chilled or over ice.

Pomace brandy (also called marc in both English and French) is produced by fermentation and distillation of the grape skins, seeds, and stems that remain after grapes have been pressed to extract their juice (which is then used to make wine). Most pomace brandies are neither aged nor coloured.

Examples of pomace brandy are:

Wine with an alcohol concentration of 8% to 12% ABV and high acidity is boiled in a pot still. Vapours of alcohol, water, and numerous aromatic components rise and are collected in a condenser coil, where they become a liquid again. Because alcohol and the aromatic components vaporise at a lower temperature than water, the concentration of alcohol in the condensed liquid (the distillate) is higher than in the original wine.

Distillation does not simply enhance the alcohol content of wine. The heat under which the product is distilled and the material of the still (usually copper) cause chemical reactions to take place during distillation. This leads to the formation of numerous new volatile aroma components, changes in relative amounts of aroma components in the wine, and the hydrolysis of components such as esters.

Brandy is produced using one of three aging methods:

Brandy has a traditional quality rating system, although its use is unregulated outside of Cognac and Armagnac. These indicators can usually be found on the label near the brand name:

Cognac and South African pot still brandy are examples of brandy produced in batches using pot stills (batch distillation). Many American brandies use fractional distillation in tower stills to perform their distillation. Special pot stills with a fractionation section on top are used for Armagnac.