Cocktail
This article is about the mixed drink containing alcohol. For other uses, see Cocktail (disambiguation). 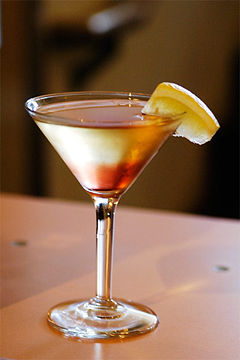 A typical cocktail, served in a cocktail glass.

A cocktail is an alcoholic mixed drink that contains two or more ingredients—at least one of the ingredients must be a spirit.

Cocktails were originally a mixture of spirits, sugar, water, and bitters.[1] The word has come to mean almost any mixed drink that contains alcohol.[2] A cocktail today usually contains one or more kinds of spirit and one or more mixers, such as soda or fruit juice. Additional ingredients may be sugar, honey, milk, cream, and various herbs.[3]

The origin of the word cocktail is not known.

The earliest known printed use of cocktail is said to be in The Farmer's Cabinet on April 28, 1803:[4]

The earliest definition of cocktail was in the May 13, 1806, edition of The Balance and Columbian Repository, a publication in Hudson, New York, in which an answer was provided to the question, "What is a cocktail?". It replied:

Cocktail is a stimulating liquor composed of spirits of any kind, sugar, water, and bitters—it is vulgarly called a bittered sling and is supposed to be an excellent electioneering potion, inasmuch as it renders the heart stout and bold, at the same time that it fuddles the head. It is said, also to be of great use to a democratic candidate: because a person, having swallowed a glass of it, is ready to swallow any thing else.[5] 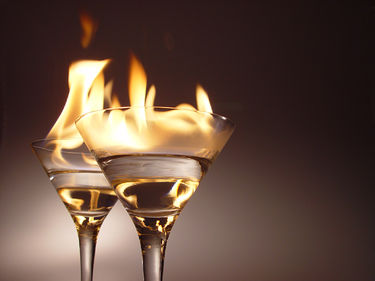 Compare the ingredients listed (spirits, sugar, water, and bitters) with the ingredients of an Old Fashioned,[6] which originated as a term used by late 19th century bar patrons to distinguish cocktails made the “old-fashioned” way from newer, more complex cocktails.[7]

The first publication of a bartenders' guide which included cocktail recipes was in 1862 — How to Mix Drinks; or, The Bon Vivant's Companion, by "Professor" Jerry Thomas. In addition to listings of recipes for Punches, Sours, Slings, Cobblers, Shrubs, Toddies, Flips, and a variety of other types of mixed drinks were 10 recipes for drinks referred to as "Cocktails". A key ingredient which differentiated "cocktails" from other drinks in this compendium was the use of bitters as an ingredient, although it is not used in many modern cocktail recipes.

The first "cocktail party" ever thrown was allegedly by Mrs. Julius S. Walsh Jr. of St. Louis, Missouri, in May 1917. Mrs. Walsh invited 50 guests to her home at noon on a Sunday. The party lasted an hour, until lunch was served at 1 pm. The site of this first cocktail party still stands. In 1924, the Roman Catholic Archdiocese of St. Louis bought the Walsh mansion at 4510 Lindell Boulevard, and it has served as the local archbishop's residence ever since.[8]

During Prohibition in the United States (1920–1933), when alcoholic beverages were illegal, cocktails were still consumed illegally in establishments known as speakeasies. The quality of liquor available during Prohibition was much worse than previously.[2] There was a shift from whiskey to gin, which does not require aging and is therefore easier to produce illicitly.[9]

Cocktails became less popular in the late 1960s and in the 1970s, as other recreational drugs became common. In the 1980s, cocktails again became popular, with vodka often substituted for gin in drinks such as the martini. Traditional cocktails and gin began to make a comeback in the 2000s.[10] 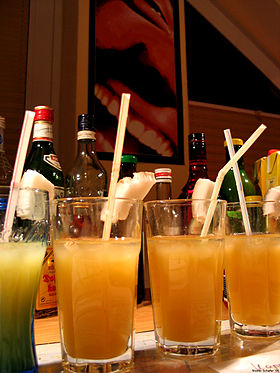 The word cocktail is sometimes used figuratively for a mixture of liquids or other substances. Such a use might be, for example: "120 years of industry have dosed the area's soil with a noxious cocktail of heavy metals and chemical contaminants."

A makeshift incendiary bomb consisting of a bottle of flammable liquid (usually gasoline) with a flaming rag attached is known as a "Molotov cocktail".