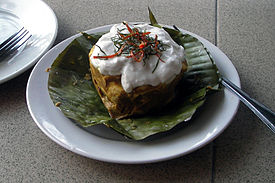 Khmer cuisine (Khmer: សិល្បៈខាងធ្វើម្ហូបខ្មែរ) is another name for the foods and cuisine widely consumed in Cambodia. The food of Cambodia includes tropical fruits, rice, noodles, drinks, dessert and various soups.

The staple food for Cambodians is rice. Almost every meal includes a bowl of rice, although noodles are also popular. A wide range of curries, soups and stir fries are served with rice. Many rice varieties are available in Cambodia, including aromatic rice and glutinous or sticky rice. The latter is more commonly found in desserts with fruits like durian.

Khmer Cuisine shares much in common with the food of neighbouring Thailand, although it is generally not as spicy; and Vietnam, with whom it shares and adopts many common dishes and a colonial history, both being part of the French colonial empire in Southeast Asia. It has also drawn upon influences from the cuisines of China and France, both of whom are powerful players in Cambodian history. Curry dishes, known as kari (in Khmer, ការី) show a trace of cultural influence from India. The many variations of rice noodles show the influences from Chinese cuisine. Preserved lemons are another unusual ingredient not commonly found in the cooking of Cambodia's neighbours, which is used in some Khmer dishes. Coconut milk is the main ingredient of many Khmer curries and desserts.

A legacy of the French is the baguette, which the Cambodians often eat with pâté, tinned sardines or eggs. One of these with a cup of strong coffee, sweetened with condensed milk, is an example of a common Cambodian breakfast.

Typically, Cambodians eat their meals with at least three or four separate dishes. A meal will usually include a soup, or samlor, served alongside the main courses. Each individual dish will be either sweet, sour, salty or bitter. Chili is served on the side, and left up to individual diners and to their taste. In this way Cambodians ensure that they get a bit of every flavor to satisfy their palates.

Several cooking courses are now run in popular tourist areas, giving visitors the chance to share the culinary secret of the Khmers. 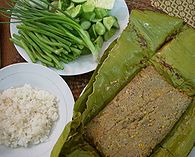 A common ingredient, almost a national institution, is a pungent type of fermented fish paste used in many dishes, a distinctive flavoring known as prahok (ប្រហុក). It's an acquired taste for most Westerners, but is an integral part of Khmer cuisine and is included in many dishes or used as a dipping sauce. The liberal use of prahok, which adds a salty tang to many dishes, is a characteristic which distinguishes Khmer cuisine from that of its neighbours. Prahok can be prepared many ways and eaten as a dish on its own right. Prahok jien (ប្រហុកចៀន), is fried and usually mixed with meat (usually beef or pork) and chilli. It can also be eaten with dips, vegetables like cucumbers or eggplants, and rice. Prahok gop or Prahok ang (ប្រហុកកប់) or (ប្រហុកអាំង) is covered with banana leaves and left to cook under a fire under pieces of rock or over the coals.

When prahok is not used, kapǐ (កាពិ), a kind of fermented shrimp paste is used instead. Khmer cuisine also uses fish sauce widely in soups and stir-fried dishes, and as a dipping sauce.

The Cambodian herb and spice base paste Kroeung.

Unknown in Asia prior to the 16th century, the chili pepper arrived with the Portuguese. More years still passed before the chili pepper reached Cambodia, and to this day it lacks a certain status in Khmer cooking and is not extensively used, unlike neighbouring Thailand, Laos or Malaysia. Black pepper is the preferred choice when heat is required in a dish. Tamarind is commonly employed as a soup base for dishes such as samlar machu. Star anise is a must when caramelizing meat in palm sugar like pork in the dish known as pak lov. Turmeric, galangal, ginger, lemongrass and kaffir lime leaves are essential spices in Khmer cooking, Khmer stews, and nearly all curries.[1]

As the country has an extensive network of waterways, freshwater fish plays a large part in the diet of most Cambodians, making its way into many recipes. Daily fresh catches come from the Mekong River, Bassac River and the vast Tonlé Sap. While freshwater fish is the most commonly-used meat in the Cambodian diet, pork and chicken are also popular. Though not as common as in neighboring Vietnam, vegetarian food is still a part of Khmer cuisine and often favored by more observant Buddhists.

From India, by way of Java, Cambodians have been taught the art of blending spices into a paste using many ingredients like cardamom, star anise, cloves, cinnamon, nutmeg, ginger and turmeric. Other native ingredients like lemongrass, galangal, garlic, shallots, cilantro, and kaffir lime leaves are added to this mix to make a distinctive and complex spice blend called "kroeung." Other ingredients for kroeung used by Khmers in America are lemongrass, turmeric powder, garlic, prahok, and lemon leaf. This is an important aromatic paste commonly used in Cambodian cooking.[2]

Many vegetables used in Khmer cuisine are also used in Chinese cuisine. Unusual vegetables such as winter melon, bitter melon, luffa, and yardlong beans can be found in soups and stews. Oriental squash can be stewed, stir fried or sweetened and steamed with coconut milk as a dessert. Vegetables like mushrooms, cabbage, baby corn, bamboo shoots, fresh ginger, Chinese broccoli, snow peas, and bok choy are commonly used in many different stir fry dishes. Together these are known by the generic term chha (ឆា). Banana blossoms are sliced and added to some noodle dishes like nom banh chok.

Fruits in Cambodia are so popular that they have their own royal court. The durian is considered the "king," the mangosteen the "queen," sapodilla the "prince" and the milk fruit (phlai teuk doh ko) the "princess." Other popular fruits include: the jan fruit, kuy fruit, romduol, pineapple, star apple, rose apple, coconut, palmyra fruit, jackfruit, papaya, watermelon, banana, mango and rambutans. Although fruits are usually considered desserts, some fruits such as ripe mangoes, watermelon, and pineapples are eaten commonly with heavily salted fish with plain rice. Fruits are also made into beverages called tuk kolok (ទឹក កលក់), mostly shakes. Popular fruits for shakes are durian, mangoes, bananas.

Fish is the most common form of meat in Khmer cuisine. Dried salted fish known as trei ngeat (ត្រីងៀត) are a favourite with plain rice porridge. The popular Khmer dish called amok uses a kind of catfish steamed in a savoury coconut-based curry. Pork is quite popular in making sweet Khmer sausages known as twah ko (ត្វារគោ). Beef and chicken are stewed, grilled or stir fried. Seafood includes an array of shellfish like clams, cockles, crayfish, shrimp and squid. Lobsters are not commonly eaten because of their price, but middle class and rich Cambodians enjoy eating them at Sihanoukville. Duck roasted in Chinese char siu style is popular during festivals. More unusual varieties of meat include frog, turtle, and various arthropods like tarantulas; these would be difficult to find in Khmer cuisine abroad, but are used in everyday dishes in Cambodia. 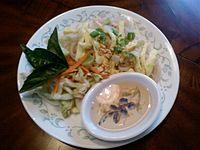 Many elements of Cambodian noodle dishes were inspired by Chinese and Vietnamese cooking[3] despite maintaining a distinct Khmer variation. Prahok is never used with noodle dishes. Rice stick noodles are used in Mee Katang (មីកាតាំង), which is a Cambodian variation of chǎo fěn with gravy. Unlike the Chinese styled chǎo fěn, the noodles are plated under the stir fry beef and vegetables and topped off with scrambled eggs. Burmese style noodles (មីកុឡា - Mee Kola) is a vegetarian dish made from thin rice stick noodles, steamed and cooked with soy sauce and garlic chives. This is served with pickled vegetables Jroak (ជ្រក់), julienned eggs, and sweet garlic fish sauce garnished with crushed peanuts. Mi Cha (មីឆា) is stir fried egg noodles.

A bowl of ka tieu.