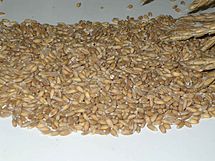 A staple food is one that is eaten regularly and in such quantities that it constitutes a dominant portion of a diet, and that supplies a high proportion of energy and nutrient needs. Most people live on a diet based on one or more staples.[1] Staple foods vary from place to place, but are typically inexpensive or readily available foods that supply one or more of the three macronutrients needed for survival and health: carbohydrate, protein, and fat, such as grains, tubers, legumes, or seeds. The staple food of a specific society may be eaten as often as every day, or every meal. Early civilizations valued staple foods because, in addition to providing necessary nutrition, they can usually be stored for a long period of time without decay.

Most staple foods derive either from cereals such as wheat, barley, rye, maize, or rice, or starchy tubers or root vegetables such as potatoes, yams, taro, and cassava.[2] Other staple foods include pulses (dried legumes), sago (derived from the pith of the sago palm tree), and fruits such as breadfruit and plantains.[3] Staple foods may also contain, depending on the region, sorghum, olive oil, coconut oil and sugar.[4][5][6]

Of more than 50,000 edible plant species in the world, only a few hundred contribute significantly to human food supplies. Just 15 crop plants provide 90 percent of the world's food energy intake, with three rice, maize and wheat - making up two-thirds of human food source. These three alone are the staples of over 4 billion people. [7]

Although there are over 10,000 species in the cereal family, just a few have been widely cultivated over the past 2,000 years. Rice alone feeds almost half of humanity. Roots and tubers are important staples for over 1 billion people in the developing world; accounting for roughly 40 percent of the food eaten by half the population of sub-Saharan Africa. Cassava is another major staple food in the developing world, providing a basic diet for around 500 million people. Roots and tubers are high in carbohydrates, calcium and vitamin C, but low in protein.

The staple food in different parts of the world is a function of weather patterns, local terroir, farming constraints, acquired tastes and ecosystems. For example, the main energy source staples in the average African diet are cereals (46 percent), roots and tubers (20 percent) and animal products (7 percent). In Western Europe the main staples in the average diet are animal products (33 percent), cereals (26 percent) and roots and tubers (4 percent). Similarly, the energy source staples vary widely within different parts of India, with its colder climate near Himalayas and warmer climate in its south.

Most of the global human population lives on a diet based on one or more of the following staples: rice, wheat, maize (corn), millet, sorghum, roots and tubers (potatoes, cassava, yams and taro), and animal products such as meat, milk, eggs, cheese and fish. Regional staple foods include rye, soybeans, barley, oats, and teff.

With economic development and free trade, many countries have shifted away from low-nutrient density staple foods to higher nutrient density staple foods. Despite this trend, there is growing recognition of the importance of traditional staple crops in nutrition. Efforts are underway to identify better strains with superior nutrition, disease resistance and higher yields.

Some foods such as quinoa - pseudocereal grains that originally came from the Andes - were staple foods centuries ago.[8] Oca, ullucu and amaranth seed are other foods claimed to be a staple in Andean history.[9] Similarly, pemmican is claimed to be a staple of natives of the Arctic region (for example, the Inuits and Metis). The global consumption of specialty grains such as quinoa, in 2010, was very small compared to other staples such as rice, wheat and maize. These once popular, then forgotten grains are being reevaluated and reintroduced. 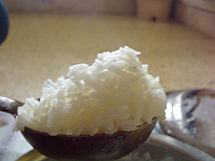 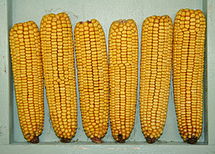 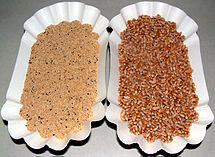 Rice is most commonly eaten as cooked entire grains, but most other cereals are milled into flour or meal which is used to make bread; noodles or other pasta; and porridges and "mushes" such as polenta or mealie pap. Mashed root vegetables can be used to make similar porridge-like dishes, including poi and fufu. Pulses (particularly chickpeas) and starchy root vegetables, such as Canna, can also be made into flour.

Part of a whole

Although nutritious, staple foods generally do not by themselves provide a full range of nutrients, so other foods need to be added to the diet to ward off malnutrition. For example, the deficiency disease pellagra is associated with a diet consisting primarily of maize, and beriberi with a diet of white (i.e., refined) rice.[10]

The following table shows the nutrient content of major staple foods in a raw form. Raw grains, however, aren't edible and can not be digested. These must be sprouted, or prepared and cooked for human consumption. In sprouted and cooked form, the relative nutritional and anti-nutritional contents of each of these grains is remarkably different from that of raw form of these grains reported in this table.