Mediterranean cuisine is the food from the cultures adjacent to the Mediterranean Sea. Whether this is a useful category is disputed: 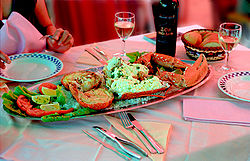 The idea of the ‘standard Mediterranean’ ... is a modern construction of food writers and publicists in Western Europe and North America earnestly preaching what is now thought to be a healthy diet to their audiences by invoking a stereotype of the healthy other on the shores of the Mediterranean. Their colleagues in Mediterranean countries are only too willing to perpetuate this myth. The fact of the matter is that the Mediterranean contains varied cultures...[1]

Around 1975, under the impulse of one of those new nutritional directives by which good cooking is too often influenced, the Americans discovered the so-called Mediterranean diet.... The name... even pleased Italian government officials, who made one modification: changing from diet—a word which has always seemed punitive and therefore unpleasant—to Mediterranean cuisine.[2]

Despite this, given the geography, these nation-states have influenced each other over time in both food and culture and the cooking evolved into sharing common principles. Mediterranean cuisine is characterized by its flexibility, its range of ingredients and its many regional variations. The terrain has tended to favour the raising of goats and sheep.[3]

Fish dishes are also common, although today much of the fish is imported since the fisheries of the Mediterranean Sea are weak.[citation needed] Seafood is still prominent in many of the standard recipes.[citation needed]

Grilled meats, pita bread, hummus, and falafel are very popular forms of the eastern type of the cuisine.

Spain also makes paella, which is rice and mussels or other seafoods.