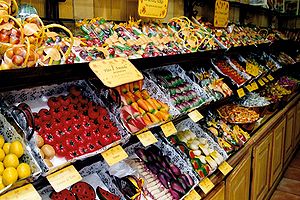 An arrangement of confections.

Confectionery is the set of food items that are rich in sugar, any one or type of which is called a confection. Modern usage may include substances rich in artificial sweeteners as well. The word candy (North America), sweets (UK and Ireland) and lolly (Australia and New Zealand) are also used for the extensive variety of confectionery.

Generally speaking, confections are somewhat low in micronutrients but rich in calories. Specially formulated chocolate has been manufactured in the past for military use as a high density food energy source.

Confectioneries are defined by the presence of sweeteners, usually sugars. Most common is the disaccharide sucrose. Hydrolysis of sucrose gives a mixture called invert sugar, which is sweeter and is also a common ingredient. Finally confectioneries, especially commercial ones, are sweetened by a variety of syrups obtained by hydrolysis of starch, these include corn syrup.[1] 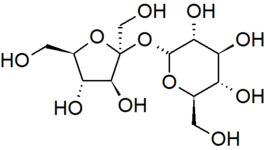 Sucrose is the most common sweetening agent in confectioneries.

Different dialects of English use regional terms for confections:

Confectionery items include sweets, lollipops, candy bars, chocolate, candy floss, and other sweet items of snack food. The term does not generally apply to cakes, biscuits, or puddings which require cutlery to consume, although exceptions such as petit fours or meringues exist. Speakers of American English do not refer to these items as "candy".

Some of the categories and types of confectionery include the following:[1] 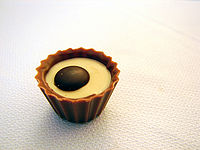 Excessive consumption of confectionery has been associated with increased incidences of type 2 diabetes, obesity, and tooth decay.[2]

Some sweets contain traces of nuts which poses risks for those who are allergic to them, while others contain dairy products which must be avoided by individuals who are lactose-intolerant.