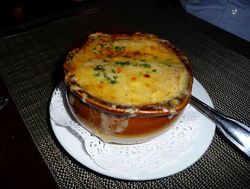 A bowl of French onion soup 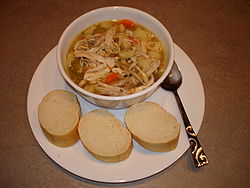 Soup is a generally warm food that is made by combining ingredients such as meat and vegetables with stock, juice, water, or another liquid. Hot soups are additionally characterized by boiling solid ingredients in liquids in a pot until the flavors are extracted, forming a broth. Traditionally, soups are classified into two main groups: clear soups and thick soups. The established French classifications of clear soups are bouillon and consommé. Thick soups are classified depending upon the type of thickening agent used: purées are vegetable soups thickened with starch; bisques are made from puréed shellfish or vegetables thickened with cream; cream soups may be thickened with béchamel sauce; and veloutés are thickened with eggs, butter, and cream. Other ingredients commonly used to thicken soups and broths include rice, lentils, flour, and grains.

Soups are similar to stews, and in some cases there may not be a clear distinction between the two; however, soups generally have more liquid than stews.[1]

Commercial soup became popular with the invention of canning in the 19th century, and today a great variety of canned and dried soups are on the market.

Dr. John T. Dorrance, a chemist with the Campbell Soup Company, invented condensed soup in 1897.[2] Today, Campbell's Tomato, Cream of Mushroom, and Chicken Noodle Soup are three of the most popular soups in America. Americans consume approximately 2.5 billion bowls of these three soups alone each year.[2] Canned Italian-style soups, such as minestrone or Italian wedding, are also popular, and are sold by Progresso and other brands.

Canned soup can be condensed, in which case it is prepared by adding water (or sometimes milk), or it can be "ready-to-eat," meaning that no additional liquid is needed before eating. Canned soup (condensed with liquid added, or "ready-to-eat") can be prepared by heating in a pan, on the stovetop or in the microwave. Such soups can be used as a base for homemade soups, with the consumer adding anything from a few vegetables to eggs, vegetables, cream or pasta.

Condensing soup allows soup to be packaged into a smaller can and sold at a lower price than other canned soups. The soup is usually doubled in volume by adding a "can full" of water or milk (about 10 ounces).

Since the 1990s, the canned soup market has burgeoned with soups marketed as "ready-to-eat," which require no additional liquid to prepare. Microwaveable bowls have expanded the ready-to-eat canned soup market even more, offering convenience (especially in workplaces) and are popular lunch items.

In terms of Western-style cuisine, vegetable, chicken base, potato, pasta and cheese soups are also available in dry mix form, ready to be served by adding hot water and sometimes fresh ingredients such as meat or vegetables. 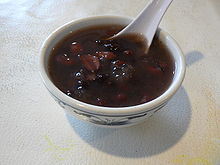 Fruit soups are served warm or cold depending on the recipe. Many recipes are for cold soups served when fruit is in season during hot weather. Some, like Norwegian fruktsuppe, may be served warm and rely on dried fruit, such as raisins and prunes and so could be made in any season. Fruit soups may include milk or cream, sweet or savoury dumplings, spices, or alcoholic beverages, such as brandy or champagne. Cherry soup is made with table wine and/or port. Starch, particularly potato starch, is used to thicken fruit soups, to make kisel.

Fruit soups are uncommon or absent in the cuisines of the Americas, Africa and Western Europe. They are also not seen in Japan, Southeast Asia or Oceania.

Cold soups are a particular variation on the traditional soup, wherein the temperature when served is kept at or below room temperature. They may be sweet or savory. In summer, sweet cold soups can form part of a dessert tray. An example of a savory chilled soup is gazpacho, a chilled vegetable-based soup originating from Spain. 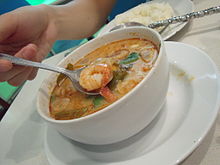 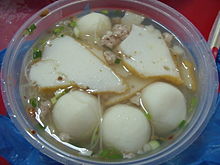 A feature of East Asian soups not normally found in Western cuisine is the use of tofu in soups. Many traditional East Asian soups are typically broths, clear soups, or starch thickened soups. 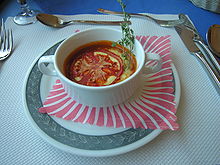 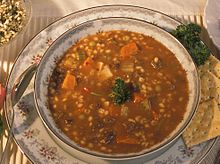 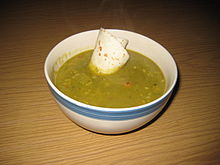 A thick pea soup garnished with a tortilla accent

Soup as a figure of speech 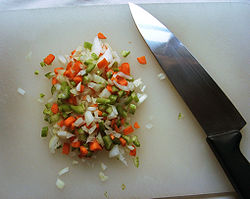 Mirepoix consists of carrot, onion and celery and is often used for soup stocks and soups

In the English language, the word "soup" has developed several uses in phrase.