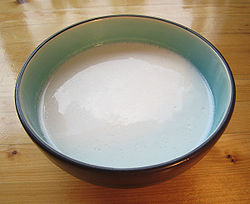 Coconut milk, in a bowl

Coconut milk is the water that comes from the grated meat of a coconut. The colour and rich taste of the milk can be attributed to the high oil content. In many parts of the world, the term coconut milk is also used to refer to coconut water, the naturally occurring liquid found inside the hollow coconut.[1]

Coconut milk can be made at home by processing grated coconut with hot water or milk, which extracts the oil and aromatic compounds. It has a fat content of approximately 17%. When refrigerated and left to set, coconut cream will rise to the top and separate out from the milk.

Manufacturers of canned coconut milk typically combine thin and thick milk, with the addition of water as a filler.

Depending on the brand and age of the milk itself, a thicker, more paste-like consistency floats to the top of the can, and is sometimes separated and used in recipes that require coconut cream rather than coconut milk. Shaking the can prior to opening will even it out to a creamy thickness. Some brands sold in Western countries add thickening agents to prevent the milk from separating inside the can, since the separation tends to be misinterpreted as an indicator of spoilage by people unfamiliar with coconut milk.

Once opened, cans of coconut milk must be refrigerated and are usually only good for a few days. If not, the milk can sour and spoil easily.

Fresh coconut milk has a consistency and mildly sweet taste similar to cow's milk, and if properly prepared, should have no coconut odour or at most a very faint one. It may be consumed raw by itself, or used as a milk substitute in tea, coffee, and even baking by vegans or people allergic to animal milk. It can also be mixed with fruit to make a yoghurt substitute. 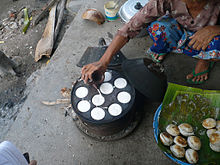 Coconut milk being poured into frying pan to make Serabi in Lombok, Indonesia.

Coconut milk is a common ingredient in many tropical cuisines, such as Burmese, Cambodian, Filipino, Indian, Indonesian, Malaysian, Singaporean, Sri Lankan, Thai and Vietnamese, as well as Brazilian, Caribbean, Polynesian, and Pacific islands cuisines. Frozen coconut milk tends to stay fresh longer, which is important in dishes in which the coconut flavor is not competing with curries and other spicy dishes.

Coconut milk is the base of many Indonesian, Malaysian and Thai curries. To make the curry sauce, the coconut milk is first cooked over fairly high heat to break down the milk and cream and allow the oil to separate. The curry paste is then added, as well as any other seasonings, meats, vegetables and garnishes.

In Indonesia, coconut milk with rice flour is the main ingredient for traditional serabi cake.

In Brazil, it is mostly used in the northeastern cuisine, generally with seafood (crustaceans, like shrimp and lobster, and fishes) stews, and in desserts. In particular, several dishes from Bahia are known to use both coconut milk and palm oil.

Coconut milk has a long-standing cultural association with health in the Ayurveda tradition. This natural drink is usually recommended for maintaining electrolyte balance and can also be used in case of dehydration. Some recent studies have suggested that coconut milk has hyperlipidemic balancing qualities, antimicrobial properties in the gastrointestinal tract or by topical application,[2][3] and it has been used as a home remedy for healing mouth ulcers.[4] In a study with rats, two coconut based preparations (a crude warm water extract of coconut milk and a coconut water dispersion) were studied for their protective effects on drug-induced gastric ulceration.[5] Both substances offered protection against ulceration, with coconut milk producing a 54% reduction vs. 39% for coconut water. In addition, the saturated fat in coconut milk is mostly lauric acid, which was found to have positive effects on the cardiovascular system.[6]

When compared to the 120 calories of 2% dairy milk, coconut milk contains only 80 calories. Coconut milk also provides 15% more of the daily value of calcium as well as half the sugars of dairy milk. The most striking difference between the two types of milk is that there is 0mg of cholesterol in "Silk Pure-Coconut Original" as opposed to 20mg of cholesterol in 2% cow’s milk.

It is important to note, however, that there is conflicting evidence on the claimed health effects of consuming significant amounts of coconut milk. One of the most prominent components of coconut milk is coconut oil, which the United States Food and Drug Administration,[7] World Health Organization,[8] International College of Nutrition,[9] the United States Department of Health and Human Services,[10] American Dietetic Association,[11] American Heart Association,[12] British National Health Service,[13] and Dietitians of Canada[11] recommend against consuming in significant amounts due to its high levels of saturated fat.

Coconut milk contains a large proportion of lauric acid, a saturated fat that raises blood cholesterol levels by increasing the amount of high-density lipoprotein cholesterol[14] that is also found in significant amounts in breast milk and sebaceous gland secretions.[15] This may create a more favourable blood cholesterol profile, though it is unclear if coconut oil may promote atherosclerosis through other pathways.[14] Because much of the saturated fat of coconut oil is in the form of lauric acid, coconut oil may be a better alternative to partially hydrogenated vegetable oil when solid fats are required.[16] In addition, virgin coconut oil is composed mainly of medium-chain triglycerides,[17] which may not carry the same risks as other saturated fats.[16][18] Early studies on the health effects of coconut oil used partially hydrogenated coconut oil, which creates trans fats, and not virgin coconut oil, which has a different health risk profile.[19]

In Rennell Island, Solomon Islands, local home-brew is made by fermenting coconut milk, yeast and sugar in a bin and leaving it hidden in the bush for about a week. This coconut rum is mentioned in the song "Poppa Joe" by The Sweet.

In Brazil, coconut milk is mixed with sugar and cachaça to make a cocktail called Batida de Côco.

In 1943, Johannes van Overbeek discovered that coconut milk actively encourages plant growth. This was later discovered to be due to a number of factors, but predominantly the existence in the milk of a cytokinin known as zeatin. It doesn't speed up growth in some plants such as radishes.[20] The addition of 10% coconut milk to the substrate in which wheat is grown has shown substantial improvements in yield.[21]

In southern China and Taiwan, sweetened coconut milk is served on its own as a drink during spring and summer. It is made by adding sugar and evaporated or fresh milk during the process of preparing the coconut milk. Another Chinese drink is coconut milk made from water, then mixed with fresh or evaporated milk in a 1:1 ratio and a spoon of condensed milk or sugar for each cup. They are served chilled. It is also fine to drink raw by itself, or reduced with plain water.

Drinks using coconut milk as an ingredient include: