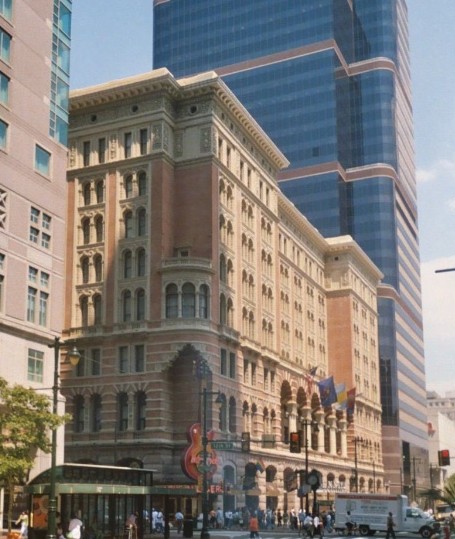 In 1889, the decided to build a train depot, passenger station, and company headquarters on the corner of 12th and Market Streets. The move came eight years after the opened its Broad Street Station several blocks away at 15th and Market Streets, and one year after the opened its 24th Street Station at 24th and Chestnut Streets.The chosen location was occupied by an open-air market that had been in continuous operation since 1653. After loud complaints and much negotiation, the Railroad agreed to purchase the markets for $1 million and move them to a new structure: the , located to the rear of the headhouse at 12th and Filbert Streets. This required the trainshed and all of its tracks to be constructed one story above street level, with the to bring trains in and out.

The building was designed in 1891 by F. H. Kimbal of the Wilson Brothers Architecture & Engineering firm. Construction began the same year, and the station opened on January 29, 1893. At the time, the trainshed was one of the largest single-span arched roof structures in the world. It is now the world's oldest such structure, and the only one left in in the United States.

The complex was fronted on Market by an eight-story headhouse that housed the passenger station and company headquarters. Built in the style, the headhouse has brick bearing walls with cast-iron columns and timber floors. Interior finishes include molded ornamental plaster and marble with cast-iron detailing.

Reading Terminal served the railroad's inter-city and trains, many of which are still running as part of the system that connects Center City with outlying neighborhoods and suburbs, especially to the north. Daily traffic peaked during with up to 45,000 daily passengers, then declined in the 1950s with the advance of road and air travel. The terminal buildings declined with the railroad's fortunes as maintenance budgets were cut. The Reading declared bankruptcy on , .

In 1976, took over the freight operations of the Reading and other northeastern lines. The railroad's regional rail service went to SEPTA, the regional transit authority for Philadelphia (though Conrail ran the services under contract from SEPTA until 1983). Still, the Reading retained ownership of its Terminal complex. SEPTA also gained control of the ex-PRR regional lines, and consolidated all regional rail service. The agency then launched the construction of the , an underground passenger rail tunnel to connect the former Reading Railroad with the former Pennsylvania Railroad at Suburban Station, the stub-end terminal of the ex-PRR network, located on the site of the former Broad Street Station. Because the stations were to connect underground - Suburban Station's terminal is located beneath its building - the Market East Station was built to replace the Reading Terminal with its elevated platforms. The new station is adjacent to and partially under Reading Terminal.

Reading Terminal handled its last train, a specially made-up R5 Lansdale, on , . Four days later, after final track connections were made to the tunnel, rail service on the ex-Reading Lines to and from Center City Philadelphia was via the Market East Station. [Highsmith, Carol and Holton, James. "Reading Terminal and Market: Philadelphia's Historic Gateway and Grand Convention Center", Chelsea Publishing Company, , . ISBN 0-9620877-1-8]

In the years that followed, the Reading Terminal's fate was uncertain, with various proposals for replacement or . Its demolition was staved off by a group led by urban-renewal advocate , who pointed to its landmark status and its location within the Market Street East Redevelopment Area. This urban-renewal zone stretched along Market Street from City Hall to 6th Street.

In 1993, the complex was chosen from among four candidates as the site for the new and purchased by the city's Redevelopment Authority of Philadelphia. After renovations, the headhouse became the center's main entrance, while the trainshed became its Grand Hall and ballroom, with meeting rooms and a hallway. The remaining space on the concourse levels of the headhouse became retail space, anchored by the . The former Reading Railroad offices on the headhouse's upper floors were converted to meeting and ballroom facilities. It also contains more than 200 rooms for the adjacent , to which it is connected by a skywalk and for which it serves as a secondary entrance.

The Market at Reading Terminal was spun off under its own control.Fact|date=April 2008