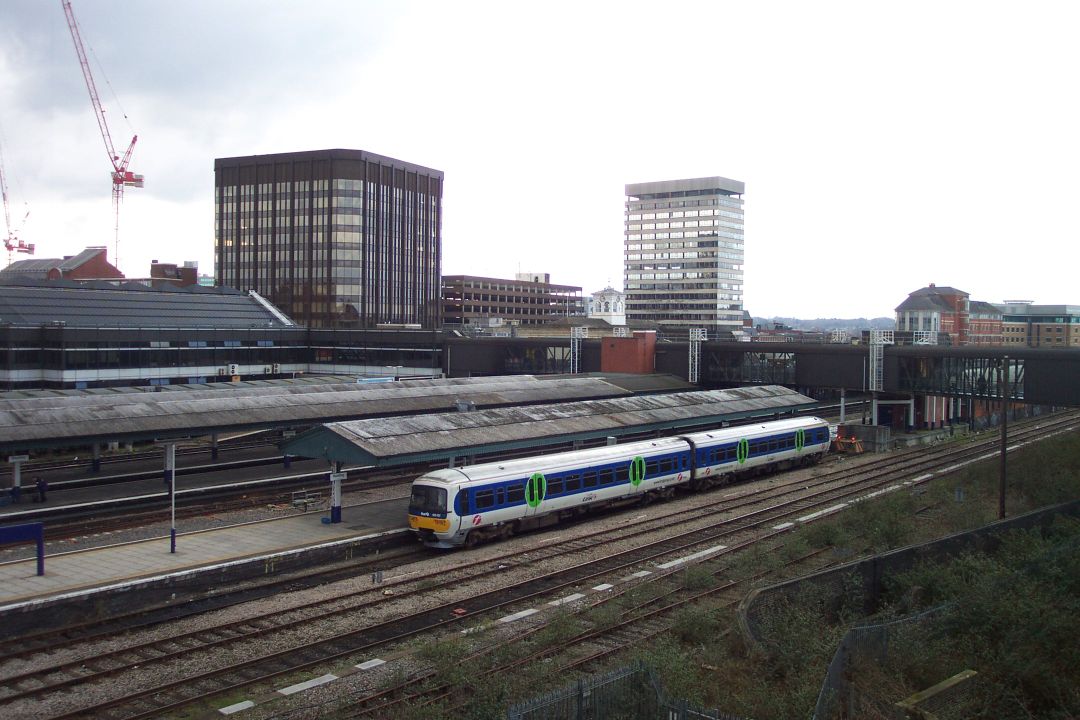 Reading railway station (formerly Reading General) is a major rail transport hub in Reading. It is situated on the northern edge of the town centre, some 5 minutes' walk from the main retail and commercial areas, and close to the . Adjacent to the railway station is a bus interchange, served by most of Reading's urban and rural bus services.

Reading is a major junction point on the system, and as a consequence the railway station is a major transfer point as well as serving heavy originating and terminating traffic. The station is sponsored by and the .

Reading station opened on the 30 March as the temporary western terminus of the original line of the . At a stroke the time taken to travel from London to Reading was reduced to one hour and five minutes, less than a quarter of the time taken by the fastest . The line was extended to its intended terminus at in . As constructed, Reading station was a typical Brunel designed single-sided intermediate station, with separate up and down platforms situated to the south of the through tracks and arranged so that all up trains calling at Reading had to cross the route of all down through trains.

New routes soon joined the London to Bristol line, with the line from Reading to Newbury and opening in , and the line to Basingstoke in . In the South Eastern Railway reached Reading with a line from and , initially serving a temporary station at North Forbury before moving into its own separate permanent terminal station, just to the south-east of the Great Western station, in . In the opened a line from its London terminus at Waterloo to , with its trains continuing over the South Eastern line to that railway's terminus in Reading.

At some time between and , the were constructed on lower ground to the north of the station. These works grew until by they were employing 500 men and producing most of the signalling equipment used by the Great Western Railway. The signal works continued in existence until .

In a new station building, in and incorporating a tower and clock, was constructed for the Great Western Railway. In the single sided station was replaced by a conventional design with 'up', 'down' and 'relief' platforms linked by a pedestrian subway.

(Lawrence of Arabia) lost the 250,000-word first draft of his "" at the station when he left his briefcase while changing trains in 1919. Working from memory, as he had destroyed his notes after completion of the first draft, he then completed a 400,000-word second draft in three months.

German aircraft tried to bomb the lines into the station during the beginning of World War 2.

For some years the site of the South Eastern station was used as the station car park. However, in a brand new station concourse, included a shopping arcade named for Brunel, opened on the western end of the old South Eastern station site, linked to the platforms of the main station by a new footbridge. At the same time a new multi-level station car park was built on the site of the former goods yard and signal works to the north of the station, and linked to the same footbridge. The station facilities in the 1860 station building were converted into the "Three Guineas" .

On , an IRA bomb exploded at a signal post near the station, some hours after 5 lb (2 kg) of was found in the toilets of the station. The resulting closure of the railway line and evacuation of the station caused travel chaos for several hours, but no-one was injured.

The main rail route served by the station is the , which runs west from London's before splitting to the west of Reading station into two lines, one serving the , and the other , Bath, and . Services on these lines are operated by , and almost all services stop at Reading.

Other main lines connect Reading with (serving both New Street and International stations), northern England and to the north, and with Winchester, and to the south. Through services from north to south on these lines are operated by , and all services, other than a few special summer-only services, stop in Reading.

To serve the traffic described above, Reading Station currently has four through-platforms and eight terminal platforms. The limited number of through-platforms, together with flat junctions immediately east and west of the station, and the fact that north-south trains need to reverse direction in the station, render the station an acknowledged bottleneck with passenger trains often needing to wait outside the station for a platform to become available.

Plans were produced by for a major redevelopment of the station, with rail track on two levels. Since the demise of Railtrack and its replacement by , the status of these plans is unclear. There is sufficient space for extra through platforms on the north side of the station, and even a disused rail underpass at the junction to the east, and there have been suggestions in the press to use these for a quicker and cheaper solution. The local Unitary Council announced a scheme projected to cost £78 million early in 2006. Meanwhile the problems were mitigated by the introduction by of more frequent but shorter trains (now operated by ), which are able to use the shorter terminal platforms for reversing instead of needing to occupy one of the through platforms.

Irrespective of railway developments, but likely to be accelerated by them, local authority plans show a comprehensive redevelopment of the area between the town centre and the river, including the station, by .

In July 2007, in its "Delivering a Sustainable Railway", the government announced plans to improve traffic flow at Reading, specifically mentioned along with as "key pinch-points" which would share investment worth £600 million. [cite journal|author=Forster, Mark|title=Rebuild will unblock Berkshire Bottleneck|journal=Rail|volume=572|date=15-28 August 2007|pages=46–7]

On , unveiled a £400 million regeneration and reconfiguration of the station and surrounding track this included an overpass system to the West of the station; with freight and passenger trains able to transit from the and to the 'slow' lines without crossing the 'fast' lines via an underpass beneath the 'fast' lines, rather than the conventional points in place. This is planned to help alleviate current delays, due to slow moving freight service passing trough the station. [Station's £400m revamp unveiled, BBC News Berkshire. http://news.bbc.co.uk/1/hi/england/berkshire/7607861.stm] As well as the reconfiguration of the track, five additional platforms are planned to be added; the terminus for London Waterloo will be altered, and the Cow Lane bridge under the tracks will be made two-way and include a cycle path.

A non-existent platform, 22, of Reading station is the gateway to a magical world where armchairs and animals speak in Andrew Matthews's Dr Monsoon Taggert's Amazing Finishing Academy.