Maidenhead railway station serves the town of Maidenhead, Berkshire, England. It is served by local services operated by First Great Western from Paddington to Reading, and is also the junction for the Marlow Branch Line. It has five platforms which are accessed through ticket barriers at both entrances to the station. The Marlow line platform has an overall roof. The ticket barriers also stop the station being used as a walk through route.

The station is on the original line of the Great Western Railway, which opened as far as Reading in 1840. The original Maidenhead Station lay east of the Thames, not far from the present Taplow station. This was the line's first terminus, pending the completion of the Sounding Arch (Maidenhead Railway Bridge) bridge over the river. In 1854, the Wycombe Railway Company built a line from Wycombe to Maidenhead, with a station on Castle Hill, at first called "Maidenhead (Wycombe Branch)", later renamed "Maidenhead Boyne Hill". However, there was no station on the present site until 1871, when local contractor William Woodbridge built it. Originally, it was called "Maidenhead Junction", but eventually it came to replace the Boyn Hill station as well as the original station on the Maidenhead Riverside.[1] 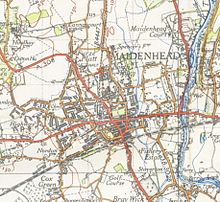 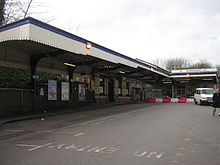 As well as regular services to London Paddington, trains run to Reading, Oxford and Marlow.

Maidenhead is the planned western terminus of Crossrail Line 1. The station will undergo significant modification, including the replacement of the existing passenger waiting facilities, a new ticket hall, lifts, a new platform for Marlow branch line services, the introduction of overhead line equipment and the construction of new stabling and turnback facilities to the west of the station.[3] There is, however, a strong local campaign to extend Crossrail to a terminus at Reading.