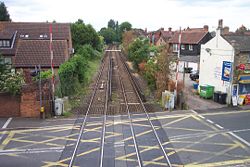 The level crossings, also viewed from the footbridge.

The station has two side platforms linked by a pedestrian footbridge, and the principal station buildings are to be found on the London bound platform. The station has a central location within Datchet village, and two level crossings cross the line immediately to the west of the station. The presence of these crossings, which carry both road routes from the village to the nearby town of Windsor, can cause traffic delays in the village.

The Windsor, Staines & South Western railway was authorised to build a railway line to Windsor in 1847, however Datchet was the temporary terminus after the line was opened from Richmond on August 22, 1848. The finally completed route over the River Thames was opened on December 1 1849.

The original station had goods facilities on both up and down sides but these were eventually closed by January 17 1965. This area is now a car park on the down side and industrial units on the up side. The large goods shed next to the station master's house was also demolished in the early 1990s. The up side station building was burnt down in a fire in September 1986 but was rebuilt in a more basic style coupled with flats above it. The station masters house survived and is the only surviving structure left.

The down side wooden building has also been lost as well. Datchet had a manual signal box which also worked the manual level crossing gates, this and Mays crossing box closed in December 1974 when control has taken over by Feltham power box, this led to the replacement of the manual barriers with the lifting ones we have today.

On a more positive note the ticket office is now open Monday-Friday between 06:15 and 13:05 & Saturday from 07:55 to 14:45 whereas previously it was weekdays peak hours only. In recent years the platforms have been raised and more modern lighting erected. The most recent development has been the relaying of both down & up lines through the station replacing some very worn permanent way.