The new station has been included as a part of the proposed High Speed 2 line from London Euston to Birmingham. The station would be constructed on the site of the Old Oak Common railway depot, and would provide a major transport interchange with a number of other mainline and commuter rail services, including Crossrail and the Great Western Main Line. The planned High Speed 2 line would be in tunnel at this point, with the Great Western Main Line and Crossrail tracks on the surface. The station may be the initial London terminus of High Speed 2, prior to its extension to Euston.[1]

According to the proposals issued in 2010 by the Department for Transport (DfT), Old Oak Common would provide direct interchange between HS2 and Crossrail and Great Western Main Line services, including those operated by Heathrow Express and First Great Western.[2][3]

The station would also have connections with London Overground and Southern services on the North London and West London Lines.

The 2010 DfT proposal outlines a number of other possible transport links at Old Oak Common, including the addition of a direct link with the High Speed 1 route to Mainland European services via the Channel Tunnel.[2]

While the station remains at the proposal stage, the following table illustrates the potential range of services, based on current DfT documentation but subject to change:

The construction company Parsons Brinckerhoff submitted a detailed plan to High Speed 2 which included West London Line, North London Line, West Coast Main Line and Dudding Hill Line platforms,[4] although this pre-dated the announcement of the HS2 London terminus such that their proposed alignment would not be possible.

A separate proposal promoted by the Campaign for Better Transport advocacy group, the North and West London Light Railway, suggests running a light rail line past the Old Oak Common site between Ealing Broadway and Brent Cross.[5] This scheme is not, however, supported by any government plans.

The Old Oak Common plans were unveiled two months before the 2010 United Kingdom General Election by the Labour government. While the present Conservative/Liberal Democrat administration supports the HS2 project, they have indicated a preference to an alternative proposal, put forward by Arup, for the HS2 line to go directly to a hub station at Heathrow Airport.[6] Under this scheme, the west London interchange would be situated at Heathrow rather than at Old Oak Common.[7] Conservative MP Theresa Villiers (now a Minister of State for Transport) referred to the Old Oak Common scheme as "Wormwood Scrubs International", and criticised it on account of its distance from the airport and the inconvenience to airport passengers having to change trains. The Mayor of London, Boris Johnson has been non-committal in supporting the Old Oak Common site, and takes the view that further evaluation is required.[8]

When asked about a High Speed Rail / Crossrail interchange at Old Oak Common, Transport Secretary Philip Hammond stated "Lug your heavy bags down a couple of escalators along 600m of corridor and then change trains at a wet suburban station somewhere in north west London. That is not an option.".[9]

The Old Oak Common plans are supported by the London Borough of Hammersmith and Fulham.[10] However Kensington and Chelsea Council has been pushing for a Crossrail station to the east of it (under the name of Kensal/Kensal Rise/Kensal Green) as a turn-back facility is needed in that area, and placing it at Kensal Rise, rather than next to Paddington itself, would provide a new station to regenerate the area.[11][12][13] Mayor Boris Johnson stated that a station could only be added if it did not increase Crossrail's overall cost; in response Kensington and Chelsea Council agreed to underwrite the projected £33 million cost of a Crossrail station.[14]

In summer 2011, Hammersmith and Fulham launched a wider 'Park Royal City' plan for Old Oak Common, including light-rail lines to the surrounding areas.[15] 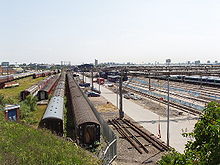 The proposed site of the Old Oak Common interchange station is located to the north of Wormwood Scrubs. Currently this area is made up of the disused EWS train maintenance site to the north, which is currently being converted into a construction equipment marshalling area for the Crossrail Project. To the South of this site is the First Great Western Old Oak Common Traction Maintenance Depot. Should Old Oak Common Station be built as proposed it will leave the Great Western Main Line with no traction maintenance facilities east of Reading, Berkshire.