The Croxley Rail Link is a railway engineering proposal to re-route part of a London Underground line in Hertfordshire, outside London, UK. The project would divert Metropolitan line Watford branch services after Croxley station away from Watford station to Watford Junction via intermediate stations using a reopened section of presently disused track.

If the Croxley Rail Link is implemented, direct services into Watford Junction from Aylesbury would also be possible,[2] linking Watford to the new developments in Aylesbury as well as the Chilterns to the commercial centre at Watford whilst also providing transport connections at the Junction to the North and other destinations.

The Croxley Rail Link is one of 23 proposed transport developments placed into the Department for Transport's qualification Pool in February 2011.[7]

Despite its name, the location of the present London Underground Watford station is in a somewhat peripheral to Watford town centre, close to Cassiobury Park. Historically it was the Metropolitan Railway's intention to extend its Watford branch onwards into central Watford via a tunnel under Cassiobury Park. Watford Metropolitan Line station was constructed at a lower level in preparation for a cut-and-cover tunnel across the park. This plan was vetoed by the Earl of Essex, who objected to the ventilation shafts necessary for the steam trains of that era. The planned Watford Central station building on Watford High Street, opposite Clarendon Road, still exists as The Moon under Water Public House; this building was intended to be the booking hall for the station.[8]

Also in the Watford area was a single-track British Rail branch line, which originally opened in 1912 as part of the Watford and Rickmansworth Railway, ran from Watford Junction to Croxley Green. The line closed in 1996 due to low usage.

The two lines, though at their closest only about 200 metres apart, were never linked.

In 2005 Transport for London (TfL) tentatively committed to providing up to £18m of the total estimated costs of £65m for the project, predicting that the link would be operational by 2010.[9] However, difficulties subsequently arose in securing the remaining funding from the Department for Transport and a revised project submission, under new guidelines, was prepared, with a view to obtaining Programme Entry status. A business case was submitted to the DfT in February 2008, citing revised costs of £95m.[10] This was rejected in March on the basis that no guarantee of financial backing had been received from TfL.[11]

The scheme took a major step forward in July 2008 when the East of England Regional Assembly declared it a "priority" among transport policies in the region and agreed to contribute £119.5m[12] towards the estimated costs which were said to have risen to £150m.[13] Hertfordshire County Council also agreed to allocate £25.8m which it hoped to recover through ticket sales and other London Underground revenue.[14] It was predicted that the link could be operational within seven years.[12]

It was hoped that these plans - the £162 million Croxley Rail Link and the £38 million Watford Junction Interchange - would reduce congestion and boost Watford's economy.[15]

“I’m delighted that the regional assembly will be pushing the Government to fund these schemes. We need to invest in our transport infrastructure if we’re going to support our economy and reduce congestion. The Department for Transport bases its funding decisions on the regional advice, so we’re optimistic that we’ll get the go-ahead and that the line can open in 2017.”[15]

A revised business case was produced in autumn 2009 and the overall costs and scope reviewed. Following the coalition's Comprehensive Spending Review the Croxley Rail Link was placed in the pre-qualification pool and a further submission made to the Department for Transport in January 2011. In February 2011 the Department for Transport placed the project into a qualification pool of works that would be subjected to further assessments in order to bid for funding. A final bid will be submitted to the Department in September 2011, with a decision whether to award the scheme funding made in December 2011.[7] The project is now estimated to cost around £120m. 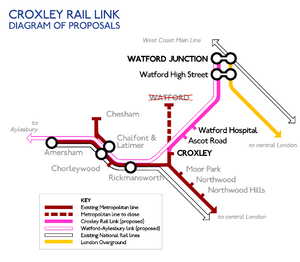 A diagram of the proposed rail services

If the Croxley Rail Link goes ahead, it would require the construction of the "missing link" between the existing Metropolitan line and the former British Rail branch line to Watford Junction at their closest point.

Under current (2011) proposals, the link would begin at a new junction near Baldwins Lane, about a kilometre north-east of Croxley station, and be carried via a new viaduct and bridge over the Watford Road dual carriageway and the Grand Union Canal.[16] This would then join onto the former British Rail line; new track would be laid on the disused trackbed and the line would be widened from single track to double track up to Watford High Street station.[17]

The submitted proposals also detail the addition of two intermediate stations to the line - both new constructions. The existing but closed Croxley Green would be replaced by a new Ascot Road station close by. A second new station would be opened on Vicarage Road (provisionally named Watford Hospital). Both of these new stations would be provided with all full Underground facilities, with the exception of ticket machines instead of a staffed ticket office.[18][19]

The Watford Friends of the Earth have claimed:

Summary of stations on the route:

The project entails the closure of the existing (Grade II listed) Watford Metropolitan Line station built in 1925 although its existing platforms may still be required for 'stabling' of trains. The proposed closure is vehemently opposed by the Save Watford Met campaign, which has collected over 1,000 signatures to its petition, which is to be submitted to the Secretary of State for Transport in August 2011, to coincide with the closure of the public consultation for the Link. The campaign claims this consultation is "dishonest" and "fundamentally flawed" and sets out the substance for its claims on its web page. These claims are strongly refuted by the promoters of the project. It has conducted its own station user survey which it claims to be more representative of the effects of closing the scheme than the work undertaken by the promoters' transport consultants in July 2010. Again, the promoters reject this claim, stating that during a survey of users at Watford station a total of 945 people were interviewed between 15th June and 1st July 2010. At the same time counts of those entering and exiting the station were also taken.

Despite not being close to the town centre, Watford Met station currently is a well used commuter station with around 1.48 million passenger movements per annum (2010). It serves the Cassiobury Estate and much of West Watford for whose residents, even with the advent of the proposed new stations, it would still be the nearest station - a claim disputed by the project's promoters. The sustainability of a number of recent housing developments in the locality were predicated on proximity to Watford Met Station, notably Cassio Metro and Fullerian Crescent.

A further proposal is to use an existing but seldom-used chord towards Aylesbury via Rickmansworth and Amersham which would allow direct services from central Watford, thus improving local public transport in Hertfordshire and Buckinghamshire.[2][21] Under this proposal, Aylesbury trains would run along an existing viaduct which connects Rickmansworth to the Watford branch of the Metropolitan Line south of Croxley; from there, services would continue along the proposed new viaduct to the Croxley Branch Line and on to Watford Junction.

The proposal was included in a Greengauge 21 report 'Capturing the Benefits of HS2 on Existing Lines'. The report proposes the onset of High Speed Two would increase capacity on the West Coast Mainline increasing the benefits of an Aylesbury Link, "The Croxley Link, the benefits of which for Metropolitan Line services would be greatly increased by the substantial intensification of service that is planned for Watford Junction. This could also support a new service from Aylesbury and other Chiltern Line destinations to Watford Junction."[22]

This proposal was included in a tube map designed for internal planning purposes by London Regional Transport in 1994.[23]

The proposed route of the Croxley Rail Link runs close to the Watford Health Campus, a major new development of Watford General Hospital which will also include a hotel, retail, business and residential developments. It is believed that this development will increase the need for public transport and will provide potential custom for Croxley Rail Link services.[24]

The new Health Campus, when built, will bring new services for the local area. The benefit of these services would be boosted by the re-opening of the Croxley Green Branch Line. According to the Health Campus Website:

"A new acute hospital for West Herts with 510 beds costing around £320 million to replace the existing Watford General Hospital, New housing for key workers, A greener, cleaner environment for west Watford, New opportunities for businesses and employment, Establishment of a new value-added knowledge based industry in West Watford, An improved and enhanced stadium for Watford FC, New public realm and community facilities, 300 new homes, including homes for health and key workers, New business, leisure and recreation premises, space for new and expanding businesses, especially those linked to healthcare delivery, Hotel, leisure and hospitality services linked to a redeveloped stadium, A new combined heat and power plant."[24]

In a planning brief for the Health Campus, It is stated:

"We also believe the granting of this permission will further support the case for the Croxley Rail Link which would enable many of our staff, and visitors to come to the hospital by rail"[24]

Watford Junction was set for huge redevelopment from 2010 onwards,[25] but the financial austerity measures of 2011 have put an end to that project for the forseeable future.[26] (the reduced number of West Coast mainline trains now stopping at Watford Junction letter from Watford & West Herts Chamber of Commerce also casts doubt on the viability of the link). The land for the redevelopment, which is behind the station and in between the industrial estates on Imperial Way, Reeds Crescent and the main railway tracks, currently houses a concrete batching plant. The architects charged with developing the area promised a "high quality design" and said the land could accommodate up to 1,400 flats and houses, as well as shops and offices, restaurants and a hotel. Another central feature of the development could have included a "landmark tower" and a new road over the branch line to St Albans Abbey, linking St Albans Road and Colonial Way. The road would have crossed the tracks and then run through the Homebase and TK Maxx shopping centre,[27] as well as providing station access to the east and a major expansion of car parking capacity. Also planned were improved bus and taxi facilities at both east and west station entrances.[28]