Curzon Street railway station (formerly Birmingham station) was a railway station in Birmingham that was used briefly for regular scheduled passenger services between 1838 and 1854 when it acted as the terminus for both the London and Birmingham Railway and the Grand Junction Railway, with lines connecting Birmingham to London and to Manchester and Liverpool respectively. It was then used for excursions until 1893 and goods traffic until 1966 when it closed. More recently, the surviving Grade I listed, entrance building has been used for occasional art events.

In 2010, a new Curzon Street station, partly on the site of the historical station was proposed as the Birmingham terminus for High Speed 2.

The station was opened in 1838, with the first train from London to Birmingham arriving on 17 September. It was the terminus for both the London and Birmingham Railway and the Grand Junction Railway and the companies had adjacent, parallel platforms but did not offer through services. The railway station was inconveniently located on the eastern edge of Birmingham city centre and its use as a passenger station was short-lived following the merging of the two companies into the London and North Western Railway in 1846. A smaller goods station, Lawley Street Goods Station, was located[when?] to the east of the station.

On 27 January 1847, the Institution of Mechanical Engineers was established with George Stephenson as its first president in the nearby Queen's Hotel; a plaque commemorating the event is located inside the station building, as the hotel has since been demolished.

The new railway company completed New Street Station half a mile to the west of Curzon Street Station in 1854 which they shared with Midland Railway. Regular passenger services at Curzon Street ceased the same year and the name of the station had been changed from 'Birmingham' to 'Birmingham Curzon Street' in November 1852. Holiday excursions continued until 1893 and it was a goods station until 1966. 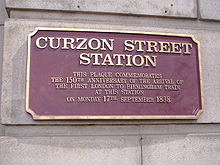 This is the plaque to the right of the entrance commemorating the first train from London to Birmingham.

The surviving Grade I listed entrance building was designed by Philip Hardwick, constructed in 1838 and is the world's oldest surviving piece of monumental railway architecture. The architecture is Roman inspired, following Hardwick's trip to Italy in 1818–19. It has tall pillars running up the front of the building, made out of a series of huge blocks of stone. The design mirrored the Euston Arch at the London end of the L&BR. As part of the original design, the building was to be flanked by two arches leading into the station, but excavations revealed that these were never built. The interior housed the booking hall, with a large iron balustraded stone staircase, a refreshment room and offices. It is three storeys tall but relatively small.

An 1838 drawing of Curzon Street station, showing the flanking arches which were never actually built

The building was used by a University of Birmingham student theatre group, the 'Three Bugs Fringe Theatre'.[citation needed] The building was also proposed as a new home for the Royal College of Organists however the proposal foundered in 2005 for lack of funds.[2] A Parcelforce depot to the rear of the station was demolished in May 2006.

The building is unused currently except for the occasional art exhibition. The City Council had hoped to refurbish the building and find an alternative tenant . It was expected to be the centrepiece of the City Park and Masshouse development scheme, which is located around the site (most of the surrounding buildings having been demolished).[citation needed]

However, these plans have now been superseded by the High Speed 2 proposal. The new station would leave the surviving entrance building intact,[3] and could incorporate it.[n 1] 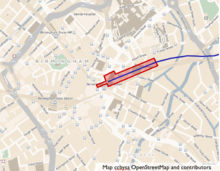 The station would have six 415-metre (1,362 ft) terminal platforms.[3] Capacity would be needed for services to the north as well as to London.[n 4]

The new station would be adjacent to Birmingham Moor Street and the two stations could be directly linked.[n 5] A link to Birmingham New Street via a people mover with a journey time of two minutes is possible.[n 6]

A design sketch for the station has been submitted by Sir Terry Farrell, architect of Beijing South Railway Station.[n 7]

It is thought that the new station could make a significant contribution to the regeneration of the area, although the pre-existing plans would have to be revised, [n 8] including those of Birmingham City University for a new Eastside campus.[4] The Curzon Gate student residence (opened 2008) would have to be demolished.[n 9] Birmingham City University wanted a £30,000,000 refund after high speed rail's plans for the campus were declared.[5]

Other references for article