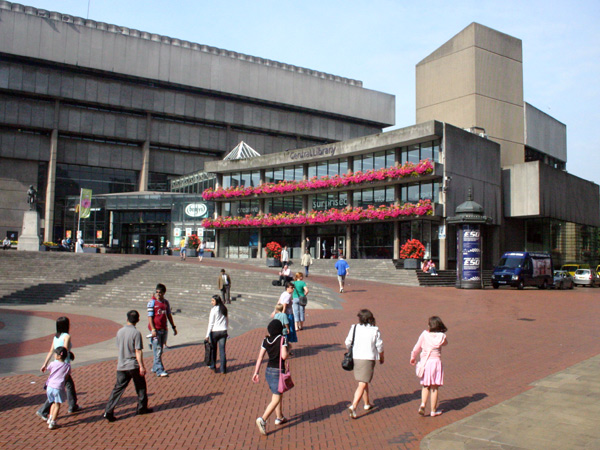 Birmingham Central Library is the main public library in , .

The main body containing the music library, collections, and Birmingham Reference Library is located on several floors over , with the main entrance and lending section in .

Special features include the collection, the Archive and the Library.

The specialist was designed in 1882 by for the previous Central Library. It contained several early folio editions. When the old building was demolished in 1974 Chamberlain's room was dismantled and fitted into the new concrete shell of the new library. It is in an extension of the main building alongside music department's and used for concerts. The room now contains the secondary collection of Shakespearean books and is mainly used as a small meeting room.

The current 1974 Brutalist building designed by (the third library on the site), an inverted , has famously been described by Prince Charles as "looking more like a place for burning books, than keeping them". Nonetheless, the is campaigning for its retention. [ [http://www.c20society.org.uk/docs/casework/birmingham.html "One step closer to save Birmingham Central Library?" - press release from the Twentieth Century Society (28 October 2006)] ]

It is a complex multi-level structure which extends below the Centenary Square ground level to form part of a busy junction (Paradise Circus) on the Inner Ring Road and was intended to include a bus station at the road level, although this was never provided. , containing shops and bars, was created in 1988 when the space under the main reference library building was enclosed and the pedestrian access to Centenary Square improved.

Architectural commentator described it as follows in the in 2003:
"The great inverted ziggurat of Birmingham, and its 30 miles of bookshelves .... owes its curious profile to US precedent, not to commercial design. Its architect, , a home-grown talent, based its design on that of Kallman, McKinnell and Knowles's (1963-68). It has real presence, and it is not hard to imagine it being transformed, with the help of sympathetic and imaginative architects, artists and designers, into a popular hub of fresh cultural activity."

"Originally, it was meant to have stood amid water gardens rather than burger bars, which would have softened the blow of its muscular design. Sadly, the money ran out. This was not a cheap building: concrete slabs were faced in Hopton Wood stone; ceilings were coffered in much the same way as the great libraries of Ancient Rome would have been; furniture was custom-designed by the architects. Shopping mall and McDonald's aside, the building is a generously thought out piece. And, despite the case against it, the council is rather proud of the fact that the library remains, and will do so right up to the point of demolition, the city's busiest public building, attracting over 5,000 visitors a day.""

According to its website, Argent Group PLC (Argent) acquired Paradise Forum and Chamberlain House at Paradise Circus in 2004. Together with major landowners, it says it is working to improve the environment around Paradise Circus. It has produced a masterplanning study in conjunction with Birmingham City Council and the University of Central England that would potentially create a 2.2 million sq ft mixed use scheme for the site. Argent claims to have invested £2 million in a refurbishment programme to "improve the physical environment, offer an improved mix of facilities and create a safe and bright pedestrian thoroughfare under the Argent management regime implemented at Brindleyplace".

The northern part of the pedestrian level peters out in a added-on crude staircase descending to road level, presumably added when it became clear that further elevated pedestrian walkway would not be built.

The City Council wishes to create a pedestrian street axis extending from Centenary Square to the . The existing Central Library stands on this axis and its size and massive stained concrete structure blocks this vision of an axis from the to the Museum and Art Gallery.

The first municipal library occupied the northern half of a site on and facing the Town Hall. The site had been acquired from the (BMI) after they had commenced construction of their own institute building on the southern half, which was to include a public library - a referendum under the Free Libraries Act 1850 on the creation of a municipal library having failed. A second vote in 1860 agreed on the building of a library, causing the Corporation and the BMI to cooperate in a joint site. A design by E. M. Barry had been chosen by the BMI but was too expensive for the Corporation, so they chose William Martin to design all but the façade. The library was opened in 1865, but during the building of an extension in 1879 a fire caused extensive damage, destroying most of the 50,000 reference books.

The library was rebuilt on the same site by and opened in 1882. As the number of books increased, the Council approved the creation of a replacement library in 1938, but it was not until the late 1960s, and the need for the new Inner Ring Road that action was taken, and the current building constructed alongside. The original library and the BMI were demolished and the site is now part of the and its gardens. The site the current central library is now situated was originally the Mason College and Liberal Club.

A replacement library, to be called the "Library of Birmingham", on a new campus in the city centre's "Eastside" was planned. and commissioned the Partnership to develop the concept designs. However, for financial reasons this plan has been shelved. The Council had suggested that the Library be split between a new building built between the Rep theatre and at , which as of January 2006 is a public car park (to house the main lending library) and a building at in "Eastside" (to house the archives and special collections).

However, it is possible that two-sites idea will be scrapped and the archives and special collections will move to the site at Centenary Square. [" [http://icbirmingham.icnetwork.co.uk/birminghampost/news/tm_headline=library-plans-could-be-shelved%26method=full%26objectid=18522486%26siteid=50002-name_page.html Library plans could be shelved] " - Birmingham Post (Jan 24 2007)] [* [http://www.birmingham.gov.uk/libraryofbirmingham Autumn 2007 update on move] ]

After an international design competition, run by the , a shortlist of seven architects was announced on , . They were chosen from a list of over 100 architects. The architects chosen were: [cite web |url=http://www.birmingham.gov.uk/GenerateContent?CONTENT_ITEM_ID=128387&CONTENT_ITEM_TYPE=9&MENU_ID=276 |title=Library Design Team Shortlist Announced |publisher=Birmingham City Council |author=Deborah Harries |date=2008-03-27 |accessdate=2008-03-27]
*
*
*
*
*OMA
*
*