The station was served by the Jubilee Line between 1979 and 1999, acting as the southern terminus of the line during that period.

For most of the history of the Underground the name Charing Cross was associated not with this station but with the station now known as Embankment. See below for the complex history of the name.

The Northern line and Bakerloo line parts of the station were originally opened as two separate stations and were combined when the now defunct Jubilee Line platforms were opened. The constituent stations also underwent a number of name changes during their history.

The first part of the complex, the Bakerloo line platforms, was opened as Trafalgar Square by the Baker Street & Waterloo Railway (BS&WR) on 10 March 1906.

Although both lines were owned and operated by the Underground Electric Railways Company of London (UERL), there was no direct connection below ground and passengers interchanging between the lines had to do so via two sets of lifts and the surface.

Although Charing Cross was constructed as the southern terminus of the Jubilee line, plans already existed to continue the line to the east towards Lewisham in south-east London. The tunnels were therefore constructed beyond the station beneath Strand as far as 143 Strand, almost as far as Aldwych station which would have been the next stop on the line. The subsequent regeneration of the Docklands in London's East End during the 1980s and 1990s required additional transport infrastructure and the eventual route of the extension took the new tunnels south from Green Park to provide new interchanges at Westminster, Waterloo and London Bridge stations and then on to Greenwich and Stratford.

The new tunnels branch away from the original south of Green Park station and, on the opening of the final section of the line between Green Park and Waterloo stations on 20 November 1999, the Jubilee Line platforms at Charing Cross were closed to the travelling public. The escalators continuing down to the closed platforms can, however, still be seen through closed doors at the bottom of the escalators from the ticket hall. 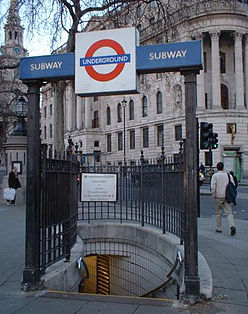 One of the entrances to Charing Cross tube station from Trafalgar Square.

A 100 metre (330 ft) long mural along the Northern line platforms was designed by David Gentleman. It shows scenes from the construction of the original Charing Cross, memorial of Eleanor of Castile, the wife of Edward I.

Although now closed to the public, the Jubilee Line platforms of Charing Cross station are still maintained by TfL for use by film and television makers needing a modern Underground station location. While still open they were used in the 1987 film The Fourth Protocol, and after closure in numerous productions, including different episodes of the television series Spooks, the films Creep (2004), 28 Weeks Later (2007), The Deaths of Ian Stone (2007) and the video for the Alex Parks's single "Cry".

In 2006, it was proposed that an extension to the Docklands Light Railway from Bank station would take over the platforms. Intermediate stations at Aldwych and City Thameslink would be opened, mirroring the planned route of the old Fleet Line.

In 2010, the concourse serving the platforms was used for London Underground's licensed busking auditions.[3]

The Jubilee Line platforms are still used by Jubilee Line trains as a sidings to reverse trains from south to north; to do so southbound trains terminate and detrain at Green Park Station and are worked empty to Charing Cross platform. The tunnels also extend beyond the platforms into the "Overrun". Each overrun has the capacity to stable a further two trains each.

Nearby places of interest