Charing Cross railway station,[3] also known as London Charing Cross,[4] is a central London railway terminus in the City of Westminster, England. It is one of 18 stations managed by Network Rail, and trains serving it are operated by Southeastern. It is the fifth busiest rail terminal in London.

The station takes its name from its location next to the central London road junction of Charing Cross. The front of the station faces the Strand, while at the other end is the northern end of Hungerford Bridge, which is crossed by all trains serving the station. Ticket barriers control access to all platforms, although the bridge entrance has no barriers.

A replica of the Eleanor Cross in Charing Cross station forecourt

The original station building was built on the site of the Hungerford Market by the South Eastern Railway and opened on 11 January 1864. The station was designed by Sir John Hawkshaw, with a single span wrought iron roof arching over the six platforms on its relatively cramped site. It is built on a brick arched viaduct, the level of the rails above the ground varying from 13 feet at the north-east end to 27 feet at the bridge abutment at the south-east end. A year later the Charing Cross Hotel, designed by Edward Middleton Barry, opened on 15 May 1865 and gave the station an ornate frontage in the French Renaissance style.

Contemporary with the Charing Cross Hotel was a replica of the Eleanor Cross in Red Mansfield stone, also designed by Edward Middleton Barry, that was erected in the station forecourt. It was based on the original 13th century Whitehall Cross that had been demolished in 1647. Distances in London are officially measured from the original site of the cross in Whitehall, now the statue of Charles I, and not from this replica cross.

The condition of the cross deteriorated until it was in such a vulnerable condition that it was placed on the English Heritage At Risk Register in 2008. A ten-month project to repair and restore the cross was completed in August 2010. This work included recreating and attaching almost 100 missing ornamental features including heraldic shields, an angel, pinnacles, crockets and finials; securing weak or fractured masonry with stainless steel pins and rods and re-attaching decorative items which had previously been removed after becoming loose.[5]

A 77-foot (23 m) length of the elegant original roof structure, comprising the two end bays at the south of the station, and part of the western wall collapsed at 3.45pm on 5 December 1905. A gang of men were employed at the time in repairing, glazing and painting the section of roof which fell. Shortly after 3.30pm a loud noise was heard in the roof and it was noticed that one of the main tie rods had broken and was hanging down. Part of the roof began to sag and cracks appeared in the western wall. It was another 12 minutes before the collapse occurred, which enabled trains and platforms to be evacuated and incoming trains to be held back. The roof, girders and debris fell across four passenger trains standing in platforms 3, 4, 5 and 6 and all rail lines were blocked. The part of the western wall which fell crashed through the wall and roof of the neighbouring Royal Avenue Theatre (now the Playhouse Theatre) in Northumberland Avenue which was being reconstructed at the time. Six lives were lost (two workmen on the roof, a W.H. Smith bookstall vendor and three workmen on the Royal Avenue Theatre site).[6]

At the Board Of Trade Inquiry into the accident doubts were expressed by expert witnesses about the design of the roof, even though the cause of the failure was attributed to a faulty weld in a tie rod. Consequently, the South Eastern and Chatham Railway decided not to repair the roof but to replace it. An enormous travelling timber gantry had to be constructed to take the remainder of the station roof down safely. The replacement was a utilitarian post and girder structure supporting a ridge and furrow roof. The curve of the original roof design can still be seen on the interior brickwork. The station was re-opened on 19 March 1906.

Following bomb damage in the Second World War, the hotel received extensive repairs in 1951, ten years after being bombed. In general, this consisted of a whole new set of top floors. The elaborate Mansard roof of the upper floors of the hotel was rebuilt in a plain neo-Georgian white brick.

In 1990 most of the area over the platforms was covered by Embankment Place, a post-modern office and shopping complex designed by Terry Farrell and Partners. This development led to the replacement of almost the whole of the 1906 roof. The rear two spans of this structure - immediately adjacent to the existing concourse roof - were retained as part of an enlarged waiting area. In addition the original retaining side walls of the station which once supported it remain in near complete condition.[7] Most of the Embankment Place complex is currently occupied by PricewaterhouseCoopers. 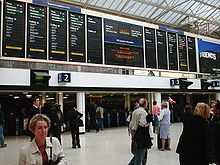 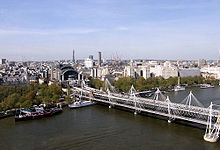 Trains to and from Charing Cross go over Hungerford Bridge to cross the River Thames.

Trains run a high frequency service between Charing Cross and London Bridge calling at Waterloo East. As of December 2010 the typical off-peak service from the station is: