London City Airport (IATA: LCY, ICAO: EGLC) is a single-runway airport. It principally serves the financial district of London and is located on a former Docklands site, 6 NM (11 km; 6.9 mi)[1] east of the City of London, opposite the London Regatta Centre, in the London Borough of Newham in east London. It was developed by the engineering company Mowlem in 1986/87. In 2010 London City was the fifth busiest airport in terms of passengers and aircraft movements serving the London area after Heathrow, Gatwick, Stansted and Luton and the 14th busiest in the UK.[2]

London City Airport has a CAA Public Use Aerodrome Licence (Number P728) that allows flights for the public transport of passengers or for flight training. Only multi-engine, fixed-wing aircraft with special aircraft and aircrew certification to fly 5.5 degree approaches are allowed to conduct operations at London City Airport.[3]

London City Airport was purchased from the Irish businessman Dermot Desmond, in October 2006 by a consortium comprising AIG Financial Products Corp. and Global Infrastructure Partners (GIP). In the final quarter of 2008 GIP increased its stake in the airport to 75%, the remaining 25% belongs to Highstar Capital.[5] In 2010, London City Airport served nearly 2.8 million passengers, a 0.6% reduction compared with 2009.[2]

History of the airport

The airport was first proposed in 1981 by Reg Ward, who was Chief Executive of the newly formed London Docklands Development Corporation (LDDC) that was responsible for the regeneration of the area. He in turn discussed the proposal with Sir Philip Beck (Chairman of John Mowlem & Co plc) and the idea of an airport for Docklands was born. By November of that year Mowlem and Brymon Airways had submitted an outline proposal to the LDDC for a Docklands STOLport city centre gateway.[6]

On 27 June 1982 Brymon Captain Harry Gee landed a de Havilland Canada Dash 7 aircraft on Heron Quays, in the nearby West India Docks, in order to demonstrate the feasibility of the STOLport project. Later that year the LDDC published a feasibility study, an opinion poll amongst local residents showed a majority in favour of the development of the airport, and Mowlem submitted the application for planning permission.[6] 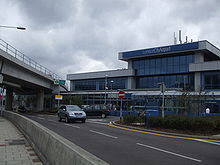 A 63 day planning inquiry started on 6 June 1983. By the middle of the following year, Nicholas Ridley the Secretary of State for Transport had indicated that he was disposed to agree the application, but asked for further details. After the failure of a court case brought by the Greater London Council in 1985, outline planning permission was granted in May of that year, followed by the grant of detailed planning permission in early 1986.[6]

Construction began on the site shortly after permission was granted, with Prince Charles, the Prince of Wales laying the foundation stone of the terminal building, designed by R Seifert and Partners, on 2 May 1986. The first aircraft landed on 31 May 1987, with the first commercial services operating from 26 October 1987. Queen Elizabeth II officially opened London City Airport in November of the same year.[6]

Placing a commercial airport into congested airspace (the London Terminal Area (TMA)) was a challenge for the National Air Traffic Services (NATS). In the event, a new airspace authority, Thames Radar, was established to provide a radar control service and provide safe separations for London City arrivals and departures.[citation needed]

In 1988, the first full year of operation, the airport handled 133,000 passengers. The earliest scheduled flights were operated to and from Plymouth, Paris, Amsterdam and Rotterdam. With a runway of only 1,080 m (3,543 ft) in length, and a glideslope of 7.5 degrees (for noise abatement reasons), the airport could only be used by a very limited number of aircraft types, principally the Dash 7 and the smaller Dornier Do 228. In 1989, the airport submitted a planning application to extend the runway, allowing the use of a larger number of aircraft types.[6][7]

In 1990 the airport handled 230,000 passengers, but the figures fell drastically after the Gulf War and did not recover until 1993, when 245,000 passengers were carried. By this time the extended runway had been approved and opened (on 5 March 1992). At the same time the glideslope was reduced to 5.5 degrees, still steep for a European airport, but sufficient to allow a larger range of aircraft, including the BAe 146 regional jet liner, to serve the airport.[6]

By 1995 passenger numbers reached the half million, and Mowlem sold the airport to Irish businessman Dermot Desmond. Five years later passenger numbers had climbed to 1,580,000, and over 30,000 flights were operated. In 2002 a jet centre catering for corporate aviation was opened, as well as additional aircraft stands at the western end of the apron. In 2003 a new holding point was established at the eastern end of the runway, enabling aircraft awaiting takeoff to hold there whilst other aircraft landed.[6]

By 2006, more than 2.3 million passengers used the airport. On 2 December 2005, London City Airport DLR station opened on a branch of the Docklands Light Railway, providing rail access to the airport for the first time, and providing fast rail links to Canary Wharf and the City of London. On 30 November 2006, the airport was sold to a consortium consisting of insurer AIG and Global Infrastructure Partners.

London City Airport was granted planning permission to construct an extended apron with four additional aircraft parking stands and four new gates to the east of the terminal in 2001. Work is now completed, with the four new stands and gates operational as of 30 May 2008. They are carried on piles above the water of the King George V Dock.[8]

In September 2009, British Airways commenced the first scheduled transatlantic flights from the airport, with a twice daily service to New York City's John F. Kennedy International Airport using a specially configured Airbus A318 aircraft. The A318 is the smallest airliner to operate transatlantic since BA's corporate predecessor, BOAC, began transatlantic jet flights on 4 October 1958, with the De Havilland Comet 4. The first day of the service, one week after Willie Walsh of British Airways pledged to the UN that aviation would deliver deep cuts in carbon emissions, was disrupted by activists from Plane Stupid and Fight the Flights dressed up in business suits.[9][10][11] 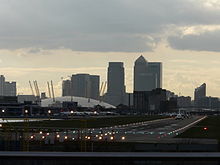 London City Airport runway with Canary Wharf in the background.

The airport has stringent rules imposed to limit the noise impact from aircraft operations. This, together with the physical dimensions of the 1,508 m (4,948 ft) long runway and the steep glideslope, limits the aircraft types that can use London City Airport.

The size and layout of the airport and overall complexity caused by the lack of taxiways mean that the airport gets very busy during peak hours. The air traffic controllers have to deal with over 38 flights an hour on a runway requiring a lengthy backtrack for each aircraft needing to depart from runway 27 or land on runway 9.

The size of the airport, constrained by the water-filled Royal Albert and King George V docks to the north and south respectively, means that there are no covered maintenance facilities for aircraft.

London City Airport is small compared with the other four London international airports. Due to its proximity to London's Docklands and financial district its main users are business travellers, but leisure traveller numbers are increasing.[citation needed] Inside the terminal there are 22 check-in desks plus self-service kiosks for British Airways, CityJet, Lufthansa, Luxair and Swiss International Air Lines. There are eighteen gates at London City Airport.

London City Airport has free Wi-Fi for all its passengers.[14] It is available throughout the terminal area and the Business Centre (located in City Aviation House).

London City is at its busiest during the winter months, when a number of airlines, most notably British Airways, Swiss International and CityJet, fly to ski resort gateway destinations. Zurich, Geneva and Milan are among the destinations popular among winter sports enthusiasts.[15]

London City Airport is linked to London's new financial district at Canary Wharf, to the traditional financial district of the City of London, and to Stratford International station adjacent to the Olympic Park, via the Docklands Light Railway, that offers interchanges with London Underground, London Overground and Southeastern Trains. London City Airport DLR station adjoins the terminal building, with enclosed access to and from the elevated platforms.

The airport is served by London Buses services 473 and 474 running to local East London destinations. However, the express shuttle buses, which formerly ran to various destinations, were withdrawn after the DLR line was built. The airport has both a short-term and a long-term car park, both within walking distance of the terminal and a taxi rank outside the terminal door.

Future of the airport

There are plans to rebuild and refurbish the terminal over the next three years[when?]. The exterior of terminal building will remain the same, but the internal infrastructure will be rebuilt to better utilise the space and handle the projected increase in passenger numbers.

In response to the UK government white paper The Future of Air Transport, the airport operators have produced a master plan outlining their vision for growth up to 2030. The plan was subject to public consultation during spring 2006, and has been republished incorporating comments from this consultation. The master plan shows a phased expansion of the airport, giving the capability of handling 8 million passengers per annum by 2030. It does not propose the addition of a second runway, or significant expansion of the airport boundaries.[4]

Phase 1 of this development would be undertaken by 2015. It would include the in-progress construction of the eastern apron extension and provision of a finger pier to the south of this apron to provide passenger access to aircraft using the new parking stands. The terminal building would also be extended to use the triangle of land between it and the railway station. The existing jet centre serving corporate aviation would be extended, a new hangar built to allow aircraft maintenance, and a replacement fire station provided.[16]

Phases 2 and 3 would be undertaken between 2015 and 2030. Further aircraft parking stands would be built to the east of the terminal, and a taxiway would be constructed alongside and to the south of the runway, to avoid the need for aircraft to back-track on the runway. Both these developments would involve further reduction in the water area of the King George V Dock. The existing fuel farm would be relocated to a site at the east of the airport, where it could be supplied by barge, and linked to a hydrant based supply system, thus eliminating both road tanker deliveries and on-airport fuel bowser movements. The existing surface car park would be replaced by a multi-storey car park, allowing extension of the vehicle drop-off and pick up area. The jet centre and hangar facilities would be further extended. Finally the existing terminal building would be replaced.[16]

In line with phase 1 of the master plan, London City Airport made a planning application to the London Borough of Newham in August 2007. This would allow it to increase the number of flights per year from 80,000 to 120,000 by 2010.[17] In July 2008, the Planning Officer for Newham Council produced a report on the Planning Application, recommending that planning permission be granted.[18] The decision was deferred by the Council's Development Control Committee at their meeting 30 July 2008, following a request from Boris Johnson, the Mayor of London, that the decision be delayed until after a study by the National Air Traffic Services (NATS) has been published.[19]

Over 10,000 letters were sent to local residents of which 1,109 replied, 801 with objections and 308 in support.[18] The 801 objections mainly concerned increase in noise, increase in air pollution, surface transport, socio-economics and regeneration. The 308 supporters mainly concerned the reduction of air pollution, an alternative London and 2012 Olympic gateway, additional jobs, and benefiting to the local economy.[18] The residents campaign group Fight the Flights is opposed to expansion due to noise.[19]