The A406 or the North Circular Road is a road which crosses North London, UK, linking West and East London. It, together with the South Circular Road, forms a ring road through the inner part of Outer London. This ring road does not make a complete circuit of the city; being C-shaped rather than a complete loop as the crossing of the River Thames in the east is made on the Woolwich Ferry.

In the west, the A406 begins at junction 1 of the M4 Motorway at Gunnersbury, from which the South Circular Road (A205) heads South over Kew Bridge. The A406 runs North under the name "Gunnersbury Avenue". Whereas most of the South Circular goes by the names of the roads widened to accommodate it, the North Circular is typically called "North Circular Road". This is because the A406 has been subject to much more road improvement, often coupled with demolition of existing houses and urban infrastructure, hence the link with the old roads has been lost. In the West where the road made slowest progress and is now unlikely ever to be further widened, the original names are preserved.

Gunnersbury Lane runs past Gunnersbury Park and via one of the narrowest sections of the A406 to Ealing Common. It then becomes Hanger Lane, crossing a narrow bridge to the foot of Hanger Hill at the top of which the name Hanger Lane is resumed until the Hanger Lane Gyratory System. This junction is a large roundabout beneath which the Western Avenue (A40) runs and is remarkable for the volume of traffic it collects and disburses. It incorporates the Hanger Lane tube station.

North of this point the A406 is substantially widened and as it does not follow an existing road assumes the "North Circular Road" name. The road is a six lane, divided highway and the original route can be seen to the north-west where it passes the legendary Ace Cafe and goes through the original arches of the main line from Euston to Scotland and past Stonebridge Park station. The old and new road continue in parallel as the A406 passes under Harrow Road (A404, actually the continuation of what is generally called the Harrow Road from Paddington to Willesden) and join immediately thereafter.

The next lights are notable for the IKEA store on the northwest and the Neasden temple on the southeast (not visible) and the road twists fairly sharply left to cross the railway left again and right, originally in order to avoid housing and to run across more empty land past the Welsh Harp Reservoir.

Under the ensuing flyover are an interchange with Edgware Road (A5) and junction 1 of the M1 motorway at Staples Corner (often mistakenly thought to have been named after the huge Staples office supplies depot formerly plainly visible from the flyover - the real source was the Staples Mattresses factory on the site).

It then passes Brent Cross Shopping Centre and beneath the Brent Cross Interchange (A41), and after approximately 1.5 miles (2.4 km) at Henlys Corner briefly shares carriageways with the A1 which joins it from the left and leaves it to the right to head into Central London.

The road passes north of St Pancras and Islington Cemetery where before Friern Barnet and Muswell Hill it takes the name Pinkham Way. The width of the span of the railway bridge means Pinkham Way narrows to two tight lanes in each direction after which Telford Road reduces further to three lanes, part of the central lane being used in different directions.

Turning right from Telford Road into Bowes Road the road continues past densely packed housing and business areas before widening at Green Lanes and assuming the North Circular Road name again once it crosses Green Lanes. Bowes Road is the last part of the A406 (travelling anti-clockwise) which has four carriageways.

At Great Cambridge Interchange, its most northerly point, the A406 crosses Great Cambridge Road (A10) and becomes Sterling Way (the name is derived from the original road in this area, Silver Street, parts of it which run alongside it). On emerging from the underpass, the A406 becomes Angel Road which leads into the Lea Valley Viaduct as it crosses the River Lea at Cook's Ferry. Angel Road railway station is partially located beneath the flyover at Angel Road.

After the viaduct the road becomes known as Southend Road, though perhaps it is more accurate to say that the two roads join. A road always did run from this point to Southend and though the new road is designated A406 and is very different from the old, the old name has been retained. Southend Road passes north of Walthamstow, and immediately before the Crooked Billet junction, the former site of Walthamstow dog track. A fast section ensues, with a number of engineering challenges and completed in the early 1990s before climbing a hill through the southernmost extremity of Epping Forest before ducking under Woodford New Road at Waterworks Corner and, heading down the hill east of the Waterworks the road enters a cutting, completed in the 1970s and travels under the old A11 at Gates Corner (previously there were traffic lights at a crossroads here).

Next there is an elevated junction with the M11 motorway above Charlie Brown's Roundabout and the A406 takes the North Circular Road name again because the real Southend Road runs away to the east (A1400). The North Circular Road turns south, passing Eastern Avenue (A12) on a flyover at Redbridge Interchange. It passes Romford Road to the west of Ilford, then crosses Barking Road in Barking, and ends at an interchange with the A13 Newham Way in East Ham. 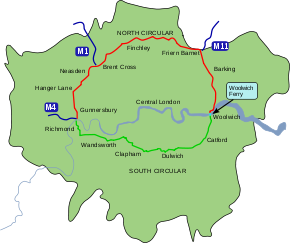 The route of the North Circular in Greater London, with the South Circular and Woolwich Ferry shown

The road then continues south of the junction as the A1020 and the joins its previous alignment (see below) along the A117. This leads to the free Woolwich Ferry across the River Thames, connecting with the eastern end of the South Circular Road on the other side of the river. The junction with the A13 has been built to enable the North Circular to be continued across the junction to the Thames Gateway Bridge when it is built.

Before the section between the M11 and A13 opened in 1987, the A406 designation extended as far as east as Gants Hill. This old stretch (Southend Road and Woodford Avenue) has been re-numbered the A1400. The official North Circular Road itself diverged at Waterworks Corner, and then followed the A104, A114, A116 and A117. 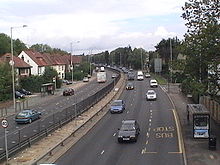 In the late 1960s the Greater London Council developed the London Ringways Plan to construct a series of circular and radial motorways throughout London to ease traffic congestion in the central area. Under this plan the North Circular Road was designated as the northern section of Ringway 2 and was scheduled to be upgraded to a motorway designated as the M15. Most of the Ringway Plans were cancelled in the early 1970s and the North Circular Road was never upgraded to full motorway standard, although much of it is now grade separated dual carriageway.

The section of the North Circular south of M11 junction 4 (the "South Woodford to Barking Relief Road") was constructed on the alignment planned for the unrealised motorway plans and the section between the M11 and A12 junctions was originally opened as part of the M11 with the interchange at Redbridge designated as M11 junction 3. The intention was to rename this section as M15 once the A406 upgrade to motorway standard had proceeded further but this never happened and the road was eventually downgraded from motorway to A road keeping the existing A406 designation.

Although the route has alternative names at some points, it is generally referred to as the North Circular throughout for route planning purposes. The route is mostly grade separated dual carriageway from the A40 to the A13 except for the Drury Way/Brentfield Road junction, the Golders Green Road/Brent Street junction, Henlys Corner and the section from Bounds Green to Green Lanes.

In 2004, Mayor of London Ken Livingstone promised limited improvements to the road, but he has received criticism for not approving earlier plans for widening the often heavily congested road at critical sections.

In 2009, it was announced that major works between the Bounds Green Road and Green Lanes junctions would finally go ahead. Work to divert utility lines such as telephone and gas supplies started in late 2009 and was due for completion in February 2010. Major works have begun in May 2010 and are expected to take approximately two years to complete.

The work will improve much of the carriageway between these junctions, widening Telford Road to two lanes and improving all of the junctions along the route. Improvements will also be made to walkways and cycle paths along this route.[1] However, the new junctions will not be grade separated. This is in contrast to the design of junctions further down the road in both directions. This design decision represents the major difference between the original Highways Agency scheme and the smaller TfL version that is being implemented.

In April 2011, a long awaited major upgrade of the Henlys Corner interchange began. This was after many years of proposals, design changes and delays. An underpass was originally proposed but this was heavily criticised by local residents and therefore scrapped. The scheme being built improves on the current junction by adding extra lanes and allowing easier right turns, with the aim of speeding up queue times. Cycle paths and safer pedestrian crossings will also be installed. The crossings will be automated during the Jewish Sabbath so that local Orthodox Jews can use these facilities during this time. The scheme is due to be completed by the end of 2011. [2]